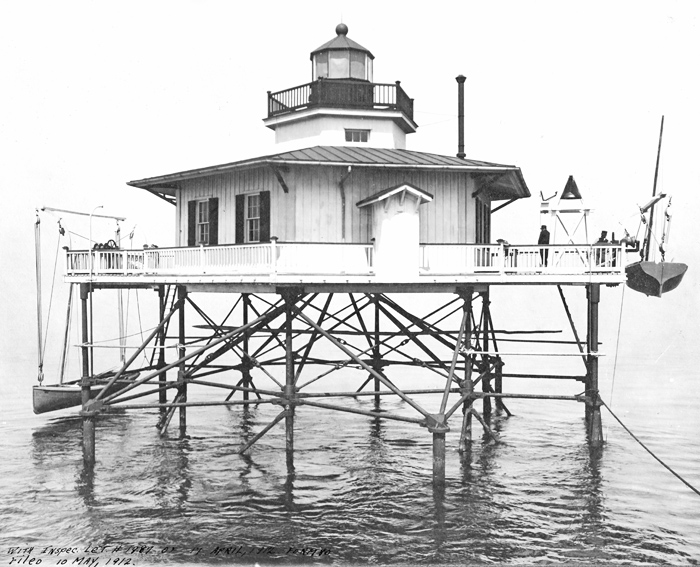 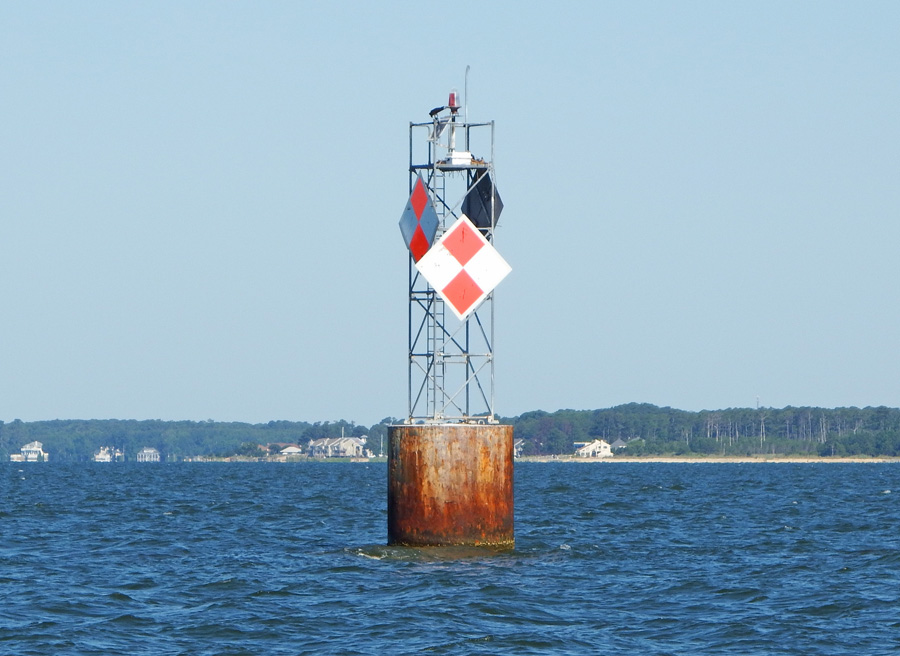 1838  Windmill-point light-boat.Light-boat and light in good order. This boat has one lantern; requires a new storm-sail.

1859  Whenever any of the light-vessels occupying positions which are adapted to the erection of light-houses upon pile-foundations require to be rebuilt, or require such extensive repairs as to render the substitution of such light-houses advisable and practicable, such permanent structures may be erected in place of any such light-vessels; but the expense arising from all such changes and erections shall be defrayed from the general annual appropriations for repairs, and so forth, of light-vessels, except when a special appropriation is made for such change.

1867  Windmill Point.The light-vessel which formerly marked this station was, in 1861, removed by the rebels and destroyed. The station has not yet been re-established, though the Board has under consideration the propriety of erecting a screw-pile light house to mark the danger.

1868  Windmill Point light-vessel.This vessel was removed by the rebels in 1861, and has not since been restored. Instructions have been given to re-establish the light so soon as a suitable vessel is available. Light-vessel No. 21, after being withdrawn from Willoughby Spit, where she now is, will be placed to mark this station.

1869  Windmill Point.This station was formerly occupied by a light vessel, but it was determined to substitute a light-house on screw-piles. The iron work of the foundation was accordingly contracted for, and completed in October last, when it was stored at the Lazaretto lighthouse depot until this spring. Meanwhile, the wood-work was prepared at the Lazaretto shops, and on the 4th May, 1869, the entire light-house, together with all accessories required in erecting it, and a suitable working party to do the work, were shipped on two schooners to the site the structure was to occupy. The exact position to be occupied by the lighthouse was fixed on the 10th May, and the work of putting it up began. It was continued without serious interruption until its completion, about the middle of August. Five to seven hours were required, with powerful levers, to make the iron screw-piles penetrate to the prescribed depth of six feet. The plan of the light-house is precisely the same as of that erected at Smith's Point last summer. It is provided with a fog-bell and machinery which strikes uniformly once every fifteen seconds. The iron work of the foundation is painted red, and the superstructure a straw color, as was the light-vessel which it replaced. The light-house having been completed, its light was exhibited for the first time on the night of September 1st, 1869, and light-vessel permanently withdrawn.

1884  Windmill Point, north side of the mouth of Rappahannock River, Virginia.The station was supplied with boat-hoisting apparatus in December. The building is in good order

1905  Windmill Point, month of Rappahannock River, Virginia. This is one of the oldest screw-pile light-houses in the district, and structurally is not strong. There was therefore deposited around it about 1,000 tons of riprap stones, weighing from 10 to 350 pounds each, to keep the structure from damage or destruction by moving fields of ice. Minor repairs were made.

1915  Charles E. Respess drowns on March 5 when trying to reach shore from the lighthouse.

1920  Repairing and rebuilding aids to navigation, Atlantic coast.The act of March 28, 1918, appropriated $150,000 for rebuilding, repairing, and reestablishing aids damaged by storm and ice, from which $100,000 was allotted to the fifth district. The act of November 16,1918, appropriated $300,000 additional for the same purpose, from which $284,000 was allotted the fifth district. The restoration of light stations in the fifth district damaged by ice floes during the winter of 1917-18 was continued during the past fiscal year by depositing riprap at nine light stations, building up existing protective works near or around these stations, or constructing new barriers or ice breakers, and by constructing new foundations and inserting bracing under several screwpile lighthouses, as follows: At Tangier Sound Light Station, Chesapeake Bay, Va., a new concrete foundation on wood piles in the form of a hollow square encasing the existing screw piles, was constructed. The station was further protected from scour and ice action by the deposit of 1,000 tons of riprap stone. At Windmill Point Light Station, Chesapeake Bay, Va., 800 tons of riprap stone were placed on the north side of the station in the form of an ice breaker to protect the weakened structure from ice floes coming down on it on the ebb tide. At Thomas Point Light Station, Chesapeake Bay, Md., the existing ice breakers on the north and south sides of the station were built up by the addition of 600 tons of riprap stone to withstand the impact of drifting ice fields.

1921  At Windmill Point Light Station the piles and braces, which were broken by ice, were repaired by electric welding.

1954  Windmill Point light station, located at the mouth of the Rappahannock river will be converted to automatic operation, effective Nov. 5, the Coast Guard has announced.

1967  Coast Guard contracted to have the lighthouse demolished. Dr. Wallace Atwood was building a marina to be called Windmill Point Resort near White Stone, Virginia at the time and he offered the contractor $2,000 for the lighthouse with hopes of reconstructing it at his marina and using it as a rental cottage. The lighthouse was dismantled in such a manner that it could not be reconstructed. The bell was saved, however, and is on display at Windmill Point Resort.

Formerly located on Rappahannock Spit, making off from Windmill Point on the northern side of the mouth of Rappahannock River.
Latitude: 37.596924, Longitude: -76.236081

A modern light stands at this location today.