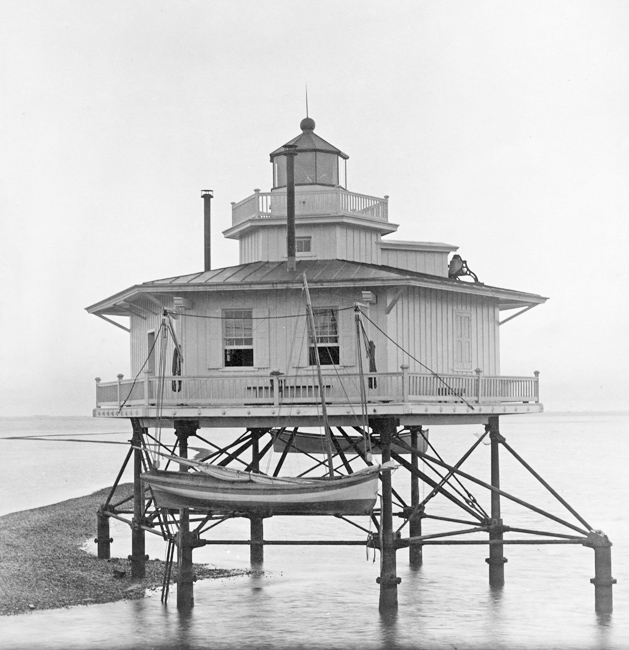 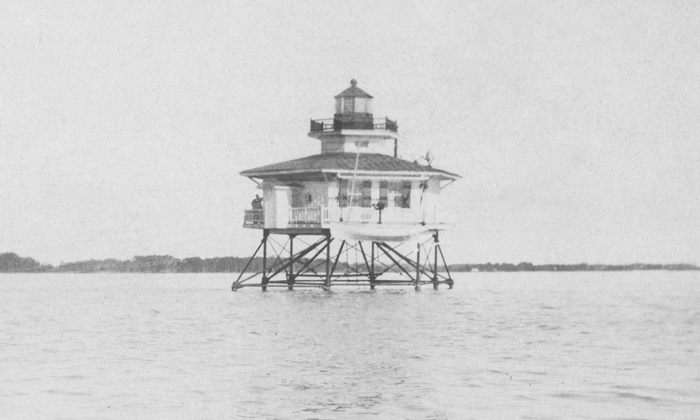 1837  From the mouth of James river to the head of its navigation there is not a light of any sort, or a buoy laid down; and yet its channel is peculiarly intricate, and the shoals and bars numerous. All vessels of any draught are, therefore, obliged to anchor at night, even with a fair wind. This inconvenience, causing such loss of time, could be effectually removed by the erection of THREE lightsone at Day's point, one at the Point of Shoals, and the other at Deep Water and Lyon's Creek shoals. With a light at each of those points, the heaviest ships could run in the night up to Hog island, about forty miles; and ships of lighter draught might go as high as Harrison's bar, about eighty or ninety miles from Hampton roads. This is the opinion of an experienced pilot, whom I employed to aid me, and whose letter will accompany this. The erection of a light on either of the points above named would (alone) be almost useless, as vessels, (except small ones,) on reaching it, would be obliged to anchor; and the three are situated within the distance of about fourteen miles. But if it be intended to erect one light, and only one, then I would, in that case, recommend its being placed on the Point of Shoals, as it is the most dangerous situation on James river.
Beverly Kennon
Capt. U.S. Navy

1853  EASTVILLE, September 30, 1853.
GENTLEMEN: In reply to your circular of September 1,1853, asking for a description of such aids as may be required to navigation in this district, I most respectfully submit, that I have sought information from the most reliable seamen of my acquaintance, all of whom unite in recommending that a light-boat should be placed at the Point of Shoals, which is at the entrance of both King's creek and Cherrystone, i.e. at the fork of these two creeks. These creeks are navigable for large vessels, and the principal shipping from and to Northampton county is carried on them. The steamer William Selden also enters Cherrystone twice a week with the United States mail. They cannot be entered, either at night or in a fog, on account of the dangerous shoals near their channels; and it is thought a light-boat, with a fog bell, would remedy this great bar to the convenience and interest of this community.
There is also a shoal known as the Middle Ground, which is dangerous to vessels passing up and down the eastern side of the bay, which could be avoided by the aid of a light boat and fog-bell at the aforementioned point.
I am, very respectfully, your obedient servant,
JNO S. PARKER, Collector, &c, for the district of Cherrystone.
THORNTON A. JENKINS and EDMOND L. F. HARDCASTLE, Esqs.,
Secretaries of Light house Board, Washington, D. C.

1854  For beacon-lights on Days Point, on the Point of Shoals, on the shore opposite Lyons Creek shoals, and on Jordans Point, and a day-beacon on White shoalall on James river, Virginia.-An examination of James river having been made, and the sites for the several works selected and marked, a report was submitted on the 4th of June following, accompanied by

The following extract is from the report: I desire here to call the attention of the board to the greater usefulness to navigation of this light, (off Glovers bluff of Days Point,) if erected at White shoal, and the transfer of the day-beacon designed for that shell-bank to the edge of the shoal off Days Point. An examination of the sketch of this part of the river, imperfect as it is, will, it is believed, demonstrate the propriety of such a change. A light would then be exhibited at the lowest point on the river at which the navigation is at all difficult; and thence to the next light above, the Point of Shoals, say ten miles distant, the sailing course is a straight one, through the best of the water.
The beacons on James river would have been finally reported upon last year, but for a sudden and protracted illness.
As my duties as a member of the board of engineers of lake harbors and western rivers did not necessarily admit of my taking any more than a supervising part in the foregoing operations, the immediate direction of them was assigned to Mr. G. Castor Smith, civil engineer, as assistant, who, by his indefatiguable industry, intelligence and faithfulness, acquitted himself in a manner to meet my entire approbation. Besides many valuable suggestions, the details of the various designs, as well as the manner of carrying them out, are in a great measure due to him.

1854 - Screw-pile light-houses were commenced at Pungoteague, Eastern Shore of Virginia, and on White Shoal, Point of Shoals, and Deep Water Shoal, James river, Virginia; also a light-house on Jordan's Point, on the same river.

1862  The lights on James river, at White shoal, Point of Shoals, and Deep Water shoal, were re-exhibited during the past summer; but, upon the withdrawal of the army from the peninsula, their services were no longer necessary, and the apparatus was taken down and stored at Fortress Monroe.

1865  It was only late in the year that the greater portion of the southern part of this district was brought permanently under the control of the government.
In the northern part the service of the district has been well attended to, and the various aids to navigation maintained in an efficient condition.
In James river the screw-pile light-houses at White shoals, Point of Shoals, and Deep Water shoals, which had been but slightly injured by the enemy, were temporarily put in order, and provided with new fog-bells and illuminating apparatus.

1868  Point of Shoals.Framework of house wherever decayed repaired; also railing around gallery repaired; iron-work, tin roof, and lantern, inside and out, painted two coats. It is recommended that the present constant level lamp be replaced by a Franklin lamp.

1869  Point of Shoals.Outside of house and the iron-work, including inside and outside of lantern, have been painted; balustrade repaired, and middle post supporting keepers dwelling spliced; new boat-falls and oars have been supplied, and a new lens, fitted with Funck lamps, will be substituted for the present illuminating apparatus. This lighthouse, built upon the same plan as the last-named, is at present in an unsafe condition, and it is probable that if the coming winter should be severe enough to form heavy ice, the light-house will be carried away when the ice breaks up. The lives of the keepers should no longer be jeoparded in this structure, and an estimate is accordingly submitted for an appropriation for rebuilding it upon an improved design.

1870  White Shoals and Point of Shoals iron screw-piles, Virginia, James River.Appropriations were made at the last session of Congress of $10,500 for each for rebuilding these two light-houses. The existing structures at these points being in imminent danger of being swept away by freshets and ice, as the one at Deep Water Shoals in the same river had been, careful examinations were made of the locations by soundings, and to determine the nature of the bottom at each place previous to the preparation of the plans for rebuilding them. The engineer of the district submitted a report and plans. The plan of each which has been approved by the board will be in general design similar to the one for Deep Water Shoals, substituting a wooden pile covered with a cast-iron screw sleeve for the solid wrought-iron screw-pile. These structures will in all likelihood be completed during the present fiscal year.

1873  Point of Shoals, James River, Virginia.This lighthouse had formerly a fog-bell rung by hand in foggy weather. It has been supplied with a machine which strikes the bell with two blows at intervals of 5 seconds, then after an interval of 20 seconds the two blows are repeated, and so on.

1886  Point of Shoals Light-Station.A structure standing on screw-piles in 2 feet of water, in a curve of the James River which forms Burwells Bay, Virginia. The keeper states that he felt three distinct shocks of earthquake on August 31. The first was felt at 9.50 p. m., local time, and there was just about five minutes between shocks. The first was very heavy, the second was not so heavy, and the third was very slight.

1932  The superstructure of Point of Shoals Light has been razed and a pipe tower structure with new illuminating apparatus installed. All buoys for Mulberry Island dredged channel have been ordered but delivery has not been completed.

1934  Point of Shoals is an extensive shoal area near mid river 10 miles above Newport News, and there are extensive unmarked shoals extending to the shore northeastward. The main shoal is marked on the western end by the steel frame base of a former lighthouse. The partly dismantled structure is about 25 feet high. The main channel of the James River formerly passed southward of the Shoals through Burwells Bay, and this channel is now marked only by buoys. In 1929 a new channel was dredged across Rocklanding Shoal east of Point of Shoals, and in 1934 it had a controlling depth of 25 feet. This is the main channel. It is well marked by buoys, most of which, are lighted.

Formerly lcoated on Point of Shoals in James River, about midway along the curve forming Burwells Bay and 3.5 miles below Mulberry Point.
Latitude: 37.06831, Longitude: -76.653031

For a larger map of Point of Shoals Lighthouse, click the lighthouse in the above map.

No light exists at this location today, but the screwpile foundation remains standing.

Find the closest hotels to Point of Shoals Lighthouse