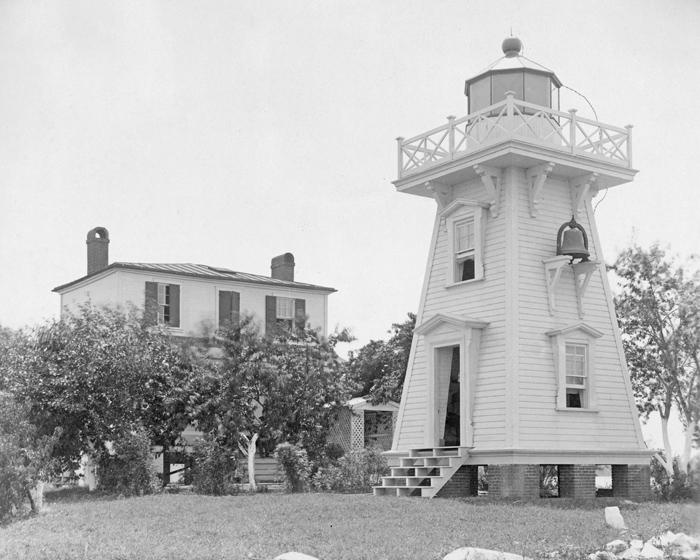 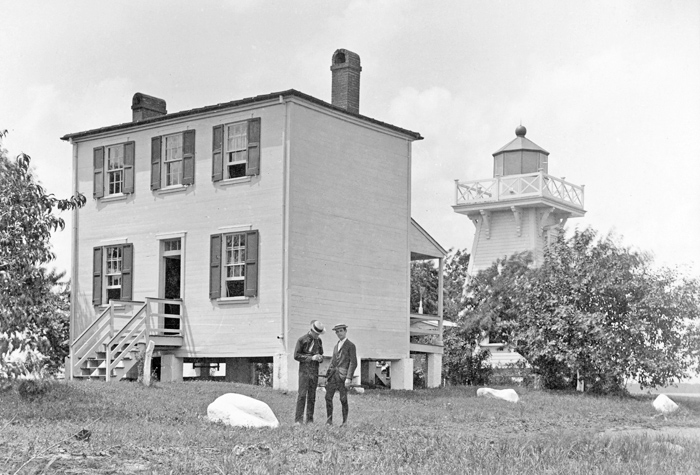 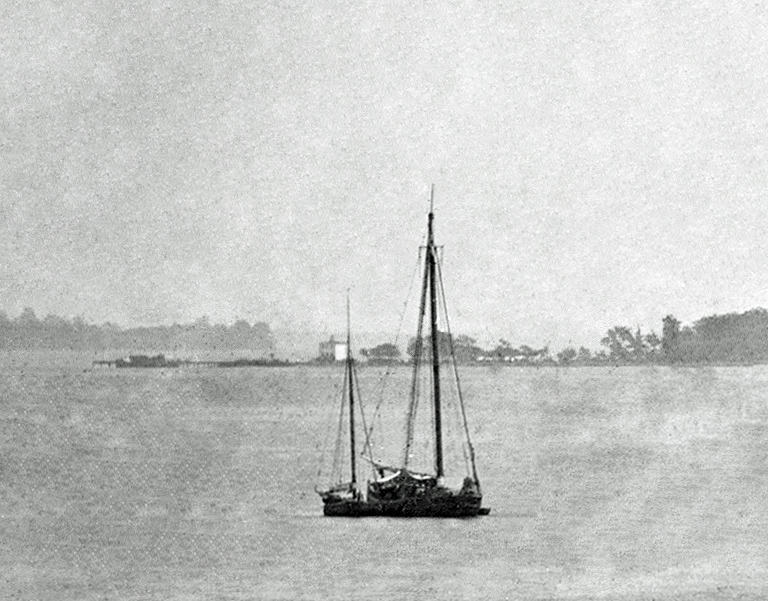 1853  The site of the light-house authorized to be placed on Jordan's point, James river, has been selected, and plans and estimates made by Major Bache, which are approved and the land purchased. When the deeds are obtained and approved, the necessary steps will be taken for commencing the work.

1855  Jordan's Point, James river.This light-house was also completed after the date of my last report. A similar illuminating apparatus to those in the screw-pile houses was first exhibited here on the 7th February, 1855.

1865  The light-house at Jordon's Point, near City Point, was thoroughly repaired and re-established, sundry requisites being provided.

1869  Jordan's Point.The house has been painted outside and in, glass set, outbuildings and fences whitewashed, plank walk laid, and bell tower painted. A new fog-bell was supplied in March last, to take the place of the old one which had been cracked. Some slight repairs are needed to the lantern.

1874  Jordan's Point, James River, Virginia.The beach on the upper side of this point is rapidly washing away, and already endangers the structure. To prevent further action of the waves the shore at this point should be protected by loose stones. The fog-bell is now rung by hand; it should be rung by machinery. This will require a change in the bell-tower, to do which and protect the site will require an appropriation of $2,000, for which an estimate is submitted.

1875  Jordan's Point. James River, Virginia.By act approved March 3, 1875, an appropriation of $2,000 was made for protecting the site and establishing a fog-bell. The exposed shore has been thoroughly protected by a dry-laid stone wall, 6 feet in thickness at the bottom, and backed with dry earth, adding slightly to the area of the grounds. A bell-tower has been built and a bell, struck by machinery, established. It is proposed to place a new lantern on the top of the present dwelling.

1887  Jordan's Point, James River, Virginia.The bids for constructing a new dwelling for this station and removing the old one were opened on September 18, and a contract was made for $3,449, and the work, which was promptly commenced, was completed in January. Thorough repairs were made to the well and slight ones to the tower.

1892  Jordan Point, James River, Virginia.The lower side of the point is being eroded rapidly by the current of the river. The safety of the buildings of the light-station is threatened. It is proposed to take measures at once to prevent the further encroachment of the water upon the light-house site.

1893  Jordan Point, James River, Virginia.In June the protection of the light-house site, proposed in the Boards last annual report, was undertaken and completed. It consists of sheet piling, 3 inches by 12 inches by 10 feet, backed by oak and pine piles driven firmly in the ground and connected by 6-inch by 12-inch cap logs and 4-inch by 8-inch stringpieces, to which the sheet piles are secured. The shore protection is 279 feet long on the channel or eastern side of the point, and 133 feet on the western. The old fence on the east side was taken down at the same time and rebuilt on a line with the shore protection. Minor repairs were made.

1899  Jordan Point, James River, Virginia.The piers under the tower were pointed, one pier was rebuilt, and one was underpinned. A plank walk was laid between the dwelling and the storehouse, and the brick pavement in front of the dwelling was repaired. Various repairs were made.

1914  On February 27, 1914, Jordan Point Front Range Light was established, consisting of a fixed red oil light exhibited from 3-pile structure at a height of 14 feet above the water. Front range was 1,300 yards from the square wooden tower that now became Jordan Point Rear Range Light.

1927  Keepers dwelling and surrounding property was sold for $1,105 except for a small plot on which the tower stood.

For a larger map of Jordan Point Lighthouse, click the lighthouse in the above map.

A modern light and the historic keeper's dwelling are on the point today.