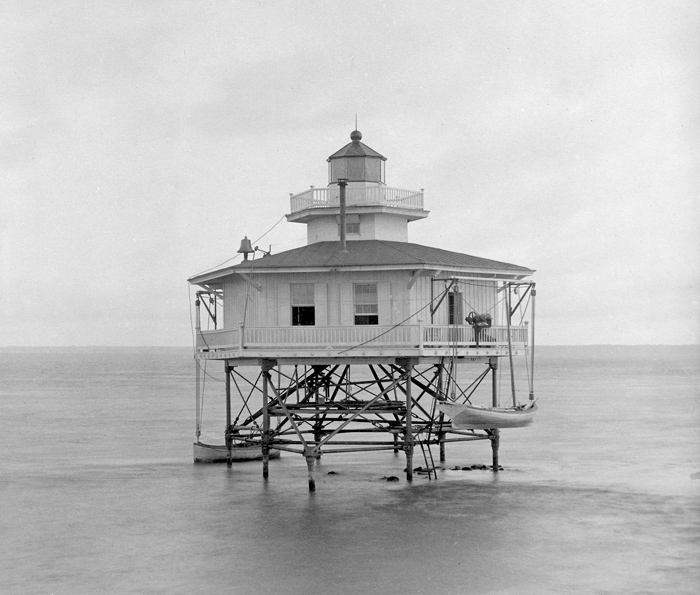 1837  From the mouth of James river to the head of its navigation there is not a light of any sort, or a buoy laid down; and yet its channel is peculiarly intricate, and the shoals and bars numerous. All vessels of any draught are, therefore, obliged to anchor at night, even with a fair wind. This inconvenience, causing such loss of time, could be effectually removed by the erection of THREE lightsone at Day's point, one at the Point of Shoals, and the other at Deep Water and Lyon's Creek shoals. With a light at each of those points, the heaviest ships could run in the night up to Hog island, about forty miles; and ships of lighter draught might go as high as Harrison's bar, about eighty or ninety miles from Hampton roads. This is the opinion of an experienced pilot, whom I employed to aid me, and whose letter will accompany this. The erection of a light on either of the points above named would (alone) be almost useless, as vessels, (except small ones,) on reaching it, would be obliged to anchor; and the three are situated within the distance of about fourteen miles. But if it be intended to erect one light, and only one, then I would, in that case, recommend its being placed on the Point of Shoals, as it is the most dangerous situation on James river.
Beverly Kennon
Capt. U.S. Navy

1857  The screw-pile light-house at Deep Water shoal, in the James river, having suffered considerable damage from the ice and storms of the past winter, temporary repairs were made, to enable the keeper to continue the exhibition of the light, and an entire new structure will be erected before the close of the season.
The other screw-pile lights in James river suffered, but not to the same extent, from the effects of the running ice upon its breaking up.
All necessary repairs have been made.

1862  The lights on James river, at White shoal, Point of Shoals, and Deep Water Shoal, were re-exhibited during the past summer; but, upon the withdrawal of the army from the peninsula, their services were no longer necessary, and the apparatus was taken down and stored at Fortress Monroe.

1865  It was only late in the year that the greater portion of the southern part of this district was brought permanently under the control of the government.
In the northern part, the service of the district has been well attended to, and the various aids to navigation maintained in an efficient condition.
In James river the screw-pile light-houses at White shoals, Point of Shoals, and Deep Water shoals, which had been but slightly injured by the enemy, were temporarily put in order, and provided with new fog-bells and illuminating apparatus.

1867  The light-house at Deep-water shoals, in James river, Virginia, was destroyed by ice on the 20th of January last. Its destruction was made the subject of a special report to Congress. An estimate of the cost of a more substantial structure was submitted, and the necessary appropriation was made available on the 1st July, coupled with the condition that the work should be done by contract. Its construction is now in progress, to be finished by the 1st January, 1868.

1868  Deep Water shoals.The new light-house at this place, which at the date of the last annual report was under construction, was completed and lighted on the evening of January 15, 1868.

1869  Deep Water Shoals.The roof of the keeper's dwelling requires slight repairs. After these are made and a new boat supplied to the station, it will be in good order.

1872  Deep Water Shoals, River James, Virginia.This light-house was painted throughout, and had other repairs made to it. The piles of the old light-house, which was destroyed by ice in 1866, were taken out and sent to the depot at Lazaretto Point, where they will be available for other works in the district or for dumb-beacons.

1881  Deep Water Shoals, James River, Virginia. These structures were painted inside and out, and minor repairs made.

1883  Deep-Water Shoals, James River, Virginia.New boat-hoisters were provided in October. The present condition of the station is fair.

1966  Deep Water Shoals Lighthouse was torn down and replaced by a skeleton tower mounted on the screwpile foundation.

For a larger map of Deep Water Shoals Lighthouse, click the lighthouse in the above map.

A light is still exhibited today from the screwpile foundation.