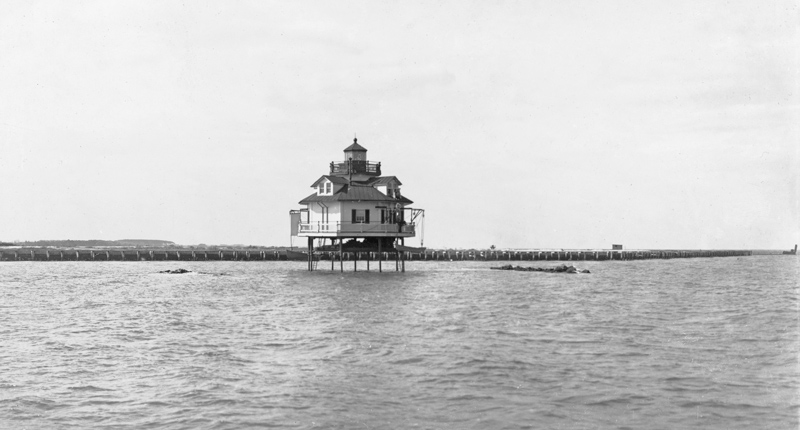 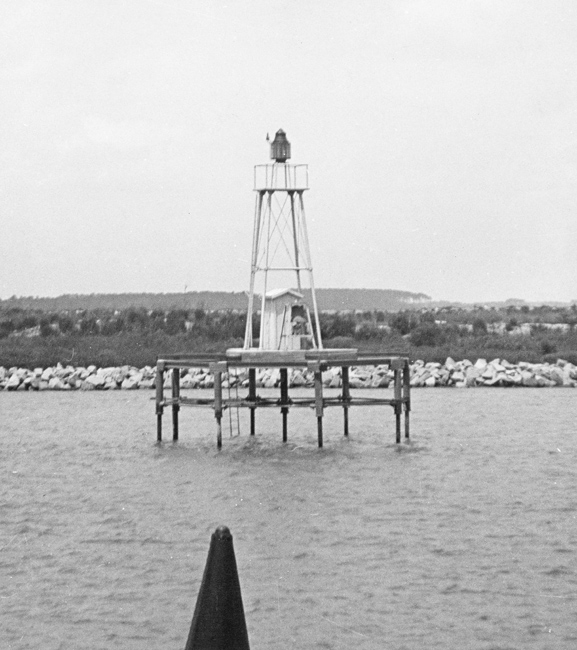 1854  Craney Island light-vessel, on the west side of the channel, near the mouth of Elizabeth River, Va. One fixed light 33 feet elevation. Vessel lead color; built in 1820. Refitted in 1854. Fog-bell; name painted on both side in large black letters.

1857  The light-vessel stationed near the channel above Craney island, leading from Hampton Roads to Norfolk, is very old, and the light not as reliable as would be a small one shown from a small screw-pile tower, which could be erected for about $10,000 or $12,000. True economy would seem to indicate the necessity for erecting such a structure in place of rebuilding and maintaining a vessel requiring, in addition to a keeper, a sufficient crew to take care of the vessel ae well as the light.

1857  All the light-vessels in this district, located in the waters of North Carolina, are very old, (with one exception, and that one a badly built contract vessel,) all of them requiring frequent and expensive repairs, and some of them are in such a condition from age as to render it almost certain that they must be rebuilt at no distant day, or their places occupied by iron screw-pile foundation lights, similar to those already erected at two points in those waters. The comparative expense in first cost has been shown to be greatly in favor of the permanent light, and that of annual support and maintenance of the permanent very small in comparison with that for the light-vessels. No engineering difficulties are apprehended in the substitution of permanent lights at the sites of those light-vessels, should Congress authorize their erection. The light-vessels which could be changed gradually to permanent lights are Craney island, Neuse river, Harbor island bar, Roanoke river, Brant island shoal, Croatan Sound, Long shoal, and Royal shoal.

1859  The board hopes to be able soon to remove in like manner the Craney island light-vessel in the waters of Virginia, the screw-pile lighthouse intended to supersede her being nearly completed. This substitution of a light-house for a light-vessel has been made under the 2d section of the act of Congress, approved March 3,1859, giving a general power of substitution to the board. The cost of maintaining a lighthouse being only about one-third that of maintaining a light-vessel, the board will continue to supplant the latter by the former as fast and whenever it may be practicable.

1862  Immediately upon the restoration of the eastern shore of Virginia to governmental control by the military operations in that quarter, the lights at Cape Charles, Cherrystone, and Hog island were re-established, and have rendered assistance of no small importance to the immensely increased navigation of Chesapeake bay and tributaries. The lights, main and beacon, at Cape Hatteras have been restored and re-established. The light at Naval Hospital, near Norfolk, has been relighted. A temporary light has been exhibited from the ruins of the light-house at Craney island, and the work of permanently restoring that structure is in progress.

1863  The light-houses at Craney Island shoal, Back river, and Cape Henry have been repaired, renovated, and refitted, and are now in operation, the important light at Cape Henry being protected from the enemy by a military guard detailed by the general commanding at Fortress Monroe.

1868  Craney Island shoal.Iron work of foundation and outside of superstructure painted two coats; tin roof repaired; lantern painted inside and out, and wood-work of two rooms inside, two coats; new glass set in windows.

1869  Craney Island.Galvanized iron pipe and other fixtures have been supplied for cooking-stove. The station is in good order.

1874  Craney Island, on the west side of the channel, near the mouth of Elizabeth River, Virginia.The house has been painted inside and out, the fog-bell and apparatus moved from the north end of the house to the center of the roof on east side, and a new weight-box made. At the same time, other minor repairs were made and the place put in good condition.

1880  Craney Island, near the mouth of Elizabeth River, Virginia.This station was put in thorough repair.

1883  Craney Island, near the mouth of the Elizabeth River, Virginia. The superstructure of this light-house is decayed. During every rain it leaks. The necessary lumber and mill-work for a new building were purchased, and its construction will soon be undertaken.

1884  Craney Island, near mouth of Elizabeth River, Virginia.The work of framing the new superstructure, to replace the old and decayed one, was commenced at the Lazaretto depot in August, and completed, after several interruptions, in January. Work at the site was commenced on March 25, and was rapidly pushed to completion. On April 3 the tin roof had been put on and the lantern gallery railing commenced. On April 14 the entire work with the exception of the painting was completed, when the working party and the tender quitted the station, leaving a painter and a laborer to finish the painting, which on April 22 was completed. The old lens and fog-bell machinery were replaced and the former characteristics of the light were retained.

1891  Craney Island, mouth of Elizabeth River, Virginia.In July and August a new wooden platform was built under the house for the storage of fuel; a new main-gallery post was put up to replace one broken by a passing vessel; new inflow pipes for the water tanks were put in. Various repairs were made.

1899  Craney Island, mouth of Elizabeth River, Virginia.On August 20,1898, a new lens, flashing white every five seconds, was substituted for the fixed white apparatus hitherto in use. Various repairs were made.

1914  Charles A. Sterling, keeper, rendered assistance to Gasoline boat Daisy and Gasoline and sailing vessel Mary Se and prevented them from running down station. Happened on June 27.

1915  On June 2, 1915, barge No. 4 of the New York, Philadelphia & Norfolk Railroad Co., broke away from the tow line of tug Henrico of the Southern Transportation Co. and collided with Craney Island Light Station, Va. The cost of repairing the light station in the estimated amount of $150 will be borne by the Government, neither the barge nor the tug being held responsible for the accident.

1918  Charles A Sterling wrote letter to the Lighthouse Superintendent of the Fifth District regarding his garden on October 1, 1918.
Sir: During the summer I cultivated a garden. Mr. Pusey, first officer of the tender Holly, allowed me to use his land, on which I produced vegetables enough for home and station use, distributing some among my neighbors who were unfortunate not to have a garden. I have dried beans and peas saved from my garden sufficient for the winter. I have now a fall and winter garden of turnips and cabbage growing nicely.
On account of no coal this winter I have collected driftwood from river enough to run me through winter at home; also, I have been using driftwood at the station since August.
This I have done during my shore leave, trying to do my bit toward winning the war and avenge the Hun t hat killed my nephew.
I want to say that I registered on the 12th of September, and am ready to serve my country in any capacity most serviceable.
Respectfully yours, C.A. Sterling
P.S.  I have contributed $2 to the Red Cross during the month.

1922  Charles A. Sterling, keeper, Craney Island Light Station, rendered assistance to the gasoline boat Loretto with 13 passengers aboard which had become disabled and drifted before a strong wind. Happened on March 19, 1922.

1924  Charles A. Sterling, keeper of Craney Island Light Station, Va., on May 8 rescued a man whose boat had capsized in the vicinity of the light station.

1924  The steamer Gratitude was returning from Jamestown Island, Va., on July 26 with 288 passengers, and struck a sunken scow about 500 yards northwest of Craney Island Light Station and immediately sank. The keeper of the light station, C.A. Sterling, had followed the distress signal of the Gratitude by striking the station bell, thereby attracting the attention of the captain of the Pennsylvania. The keeper reported the accident to the captain, who proceeded to the scene of the wreck and assisted in rescuing passengers. The keeper in meantime went out in the station boat and rescued 12 passengers from the water; many had jumped overboard. The keepers boat was the first to reach the wreck. Keeper Sterling has been officially commended by the department for his heroic work on this occasion.

1925  A silver life-saving medal was awarded in August, 1925, by the Secretary of the Treasury to Charles A. Sterling, keeper of Craney Island Light Station, who on July 26, 1924, assisted in rescuing the passengers on the steamer Gratitude, which sank immediately after the rescue.

1925  On August 3, 1925, the Bureau of Lighthouses received from the Treasury Department and forwarded to the recipients two silver life-saving medals which have been awarded in recognition of the gallant conduct of Charles A. Sterling, keeper of Craney Island Lighthouse, Va., who rescued 12 persons from drowning on July 26, 1914, and Everett Wynoble, Wisconsin, oiler on the lighthouse tender Hyacinth, who rescued a woman from drowning on April 14, 1925.
The steamer Gratitude, while returning from Jamestown Island, Va., with 288 passengers on July 26, 1924, struck a sunken scow about 500 yards northwest of Craney Island Lighthouse and immediately sank. The keeper, Charles A. Sterling, followed the distress signal of the Gratitude by striking the station bell, thereby attracting the attention of the captain of the Pennsylvania. The keeper reported the accident to the captain, who proceeded to the scene of the wreck and assisted in rescuing passengers. In the meantime, the keeper went out in the station boat and rescued from the water 12 of the passengers who had jumped overboard. His boat was the first to reach the wreck. Keeper Sterling was officially commended by the Department of Commerce for his heroic work on this occasion.

1926  On April 25, for 15 minutes during a moderate westerly gale, Craney Island Light Station, Va., was enveloped with sand dust coming off Craney Island. During that time it was necessary to sound the fog signal, and the keepers remained indoors.

1926  Charles A. Sterling, keeper of Craney Island Light Station, Va., on June 25 rendered assistance to the owner of the yacht Gleen, when an explosion partially wrecked the vessel and severely burned the owner.

1927  C. A. Sterling, keeper of Craney Island Lighthouse, Va., on October 2 rendered assistance to the disabled launch R-128, which broke down near the station with a party of women and children on board.

1928  C. A. Sterling, keeper of Craney Island Light Station, Va., on December 29, 1927, rescued a man from drowning when the motor boat Defiance burned in the vicinity of the light station.

1928  On May 21, 1928, the Treasury Department sent to C. A. Sterling, keeper of Craney Island Lighthouse, Va., a silver life-saving medal of honor, second service bar, in recognition of his service in rescuing a man from drowning when the motor boat Defiance burned in the vicinity of the station on December 29 ,1927.
On July 26, 1924, Keeper Sterling rescued several passengers on the Steamer Gratitude, and the Treasury Department on August 3, 1925, awarded him a silver lifesaving medal of honor for this rescue. This matter was reported in the Bulletin for September, 1925.

For a larger map of Craney Island Lighthouse, click the lighthouse in the above map.