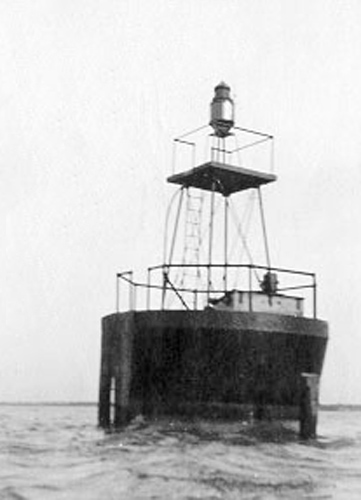 1838  Bowler's-rock light-boat, Rappahannock river.Found the captain, mate, and crew absent; examined the lantern and lamp. The lantern of this boat is too small for the lamp; it smokes badly, and has not sufficient ventilation to carry off the smoke; the boat requires calking and painting; lantern hoists above the slides with weights, which I think is a good plan.

1855  Bowler's Rock, Rappahannock river.This vessel was removed for repairs on the 8th December, 1854, at the close of navigation, and towed to Norfolk. Upon examination, she was found to be so badly decayed that it was deemed most advisable and economical to condemn her. She was sold at public auction by the superintendent of lights at Norfolk. The "Relief" light-vessel, which was attached to this district, was ordered to be fitted out for Bowler's Rock station. She was put in thorough repair, having a Costan lamp on board, and was placed at her station on the 15th April, 1855. This district is now without a relief light-vessel.

1862  All the light-vessels from Cape Henry southward, including the two in the Potomac River and those in Chesapeark Bay, (except Hoopers Straits and Janes Island,) have been removed and sunk or destroyed by the insurgents.

1867  Bowler's Rock.The vessel formerly occupying this station having been destroyed by the rebels, examinations have been made with a view to the erection of a screw-pile structure to mark it in future. Other matters of more importance having demanded immediate attention, this is still held under consideration.

1868  Light-vessel No. 28 is the regular relief vessel of the district. She has been repaired where necessary, and has rendered valuable service in marking temporarily Bowlers Rock in Rappahannock river and Smith's Point in Chesapeake bay, during the progress of construction of light houses at those points. While at Smith's Point, and during a gale or wind, the main boom was broken. A new one has been supplied and she is now in good condition.

1868  Bowler's Rock.A screw-pile light-house has been erected to take the place of the light-vessel formerly marking this station, and the light was exhibited for the first time on the evening of June 10, 1868.

1892  On shoal on port side of channel going up Rappahanock River, Va. Square white screw-pile structure; piles, brown shingle roof; lantern, black. Bell struck by machinery every 10 sec. Built in 1868. Fixed white, 5th-order light. Stands in 6 ½ feet at mean low water. On end of shoal on S. side of river, with a depth of 5 fathoms of water close-to. It is opposite to and 150 yards from Bowlers Rock obstructions, between which and the light-house the main channel lies.

1895  Bowlers Rock, Rappahannock River, Virginia.This is one of the older screw-pile light houses. It stands low in the water and the iron foundation suffered somewhat from the impact of the ice during the past winter. Its age and position render doubtful its ability to withstand without protection another similar experience, and it was accordingly considered prudent to place masses of heavy riprap stone in the axis of the current to act as ice breakers. Arrangements were made to this end, and the stone will be placed in position during July, 1895.

1896  Bowlers Rock, Rappahannock River, Virginia.During July, 1895, 270 cubic yards of riprap stone were disposed in masses on each side of the station in the axis of the current to afford protection against moving ice.

1897  Bowlers Rock, Rappahannock River, Virginia.About 200 additional tons of granite riprapping were placed on the masses already deposited about 100 feet above and below the light-house as a protection from ice fields.

1906  Bowlers Rock, Rappahannock River, Virginia.For protecting the structure from further injury by ice, about 200 tons of riprap stone was placed in position in August, one-half on top of the stone deposited in 1895 and 1896, about 100 feet upstream, and the other half around the upper ice-breaker pile of the light-house.

1918  Many light stations and other aids to navigation were damaged or destroyed, including upward of 150 aids in the waters adjacent Maryland, Virginia, and North Carolina. The estimated damage amounted to nearly $400,000, and a considerably larger amount than this will be required to reestablish the stations and provide against similar damage to these stations in the future. Important stations either wholly or practically destroyed were Choptank River, Md.; Bowlers Rock, Va.; Old Plantation Flats, Va.; North River, N. C.; and Wade Point, N. C.

1921  A small caisson structure with acetylene light and automatic carbon dioxide fog-bell apparatus has recently been completed at Bowlers Rock, in the Rappahannock River, Va., to take the place of the screw pile lighthouse which was destroyed by ice during winter of 1918. The structure is built on a submarine site, about 60 feet southeast of the old location, depth of water being 6 feet.

1921  At Bowlers Rock Light an acetylene light and automatic fog bell operated by carbon dioxide gas have been established on a caisson structure, to replace the iron pile lighthouse destroyed by ice.

For a larger map of Bowlers Rock Lighthouse, click the lighthouse in the above map.