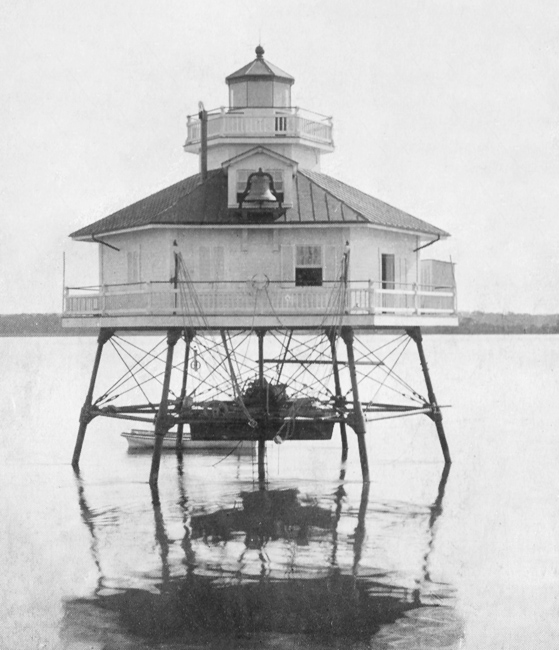 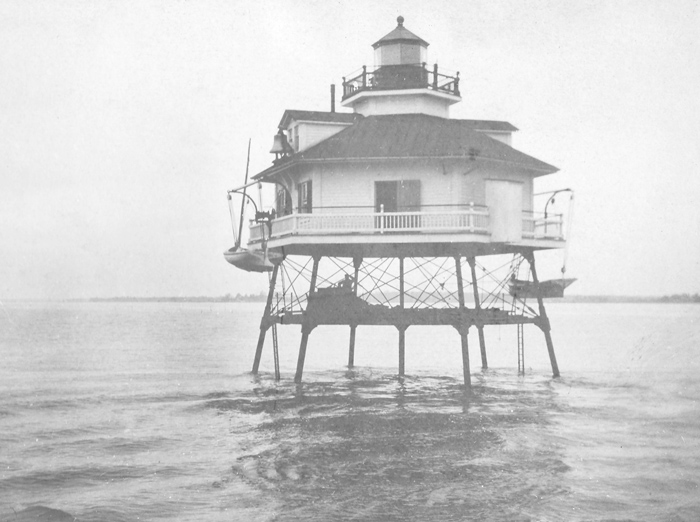 1879  Bell Rock, York River, Virginia.Owing to the increase of commerce, it is necessary to construct a light to enable vessels to reach the dock at West Point, Virginia. West Point is situated on the spit of land between the Pamunky and Mattapony Rivers, and is the sea terminus of the Richmond and York River Railroad. A screw-pile lighthouse should be constructed at Bell Rock, which would show the steamers when to change their course. The cost would be $25,000

1881  Bells Rock, York River, Virginia.The superstructure for this house was completed at the Lazaretto depot on November 20, but was used in the rebuilding of the Thimble Shoal light-house. A new structure was prepared and completed in February. The iron-work, manufactured by Messrs. Paulding, Kemble & Co., of Cold Spring, N. Y., was commenced in August and completed November 15, an extension of fifteen days having been granted the contractors. The erection of the light-house at the site was begun on April 22, and by the end of the month the iron-work was in place and the setting up of the superstructure commenced. The latter was in position and the lens set and lighted on May 30 in accordance with the published Notice to Mariners. The light-house is hexagonal in form and stands on iron piles in ten feet of water; it shows a fixed white light of the fourth order. A fog-bell is struck by machinery at intervals of fifteen seconds, during thick and foggy weather.

1883  Bell's Rock, in York River, Virginia.A new column, to replace the broken one, and new tanks, to replace the old ones taken from Thimble Shoal, were made, and will soon be placed in position.

1884  Bell's Rock, York River, Virginia.In October a new foundation column, to replace a broken one, was put in place and new water tanks were set up. In June three other columns were broken by a colliding schooner.

1885  Bells Rock, York River, Virginia.The three iron columns of the house which were broken in October, 1883, were replaced by new ones. The doors throughout the building were put in order.

1892  Bells Rock, York River, Virginia.Early in the spring arrangements were made for putting a red sector into the fixed white light at this station. This change was made on March 10, 1892. Various repairs were made.

1900  Bells Rock, York River, Virginia.A storage platform was built under the house after the old one had been removed. Various repairs were made.

1928  Bells Rock Lighthouse was demolished and a skeletal tower was erected atop the screwpile foundation.

For a larger map of Bells Rock Lighthouse, click the lighthouse in the above map.

The screwpile foundation and modern light are shore in Belleview.