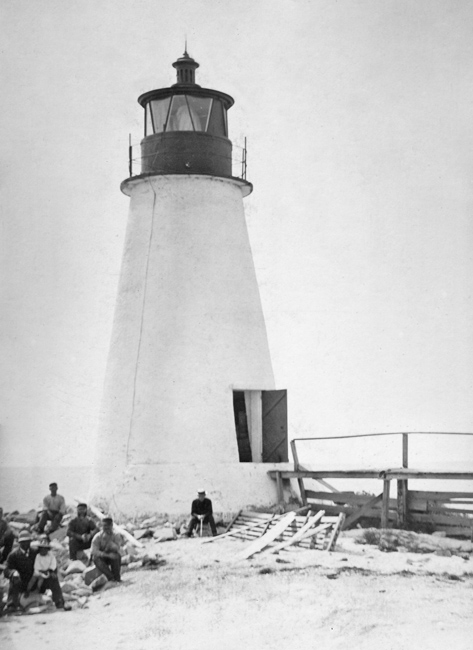 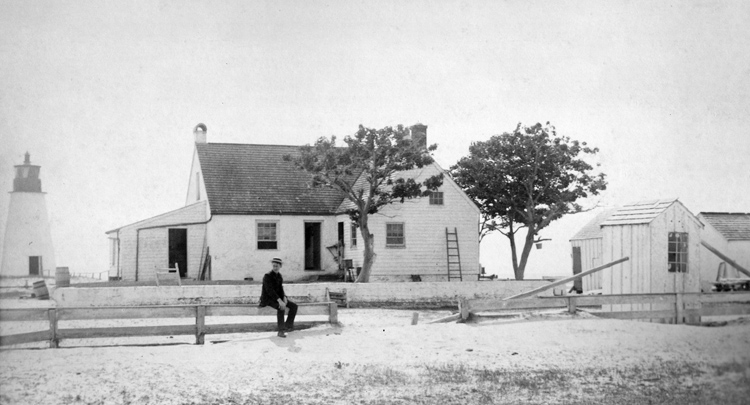 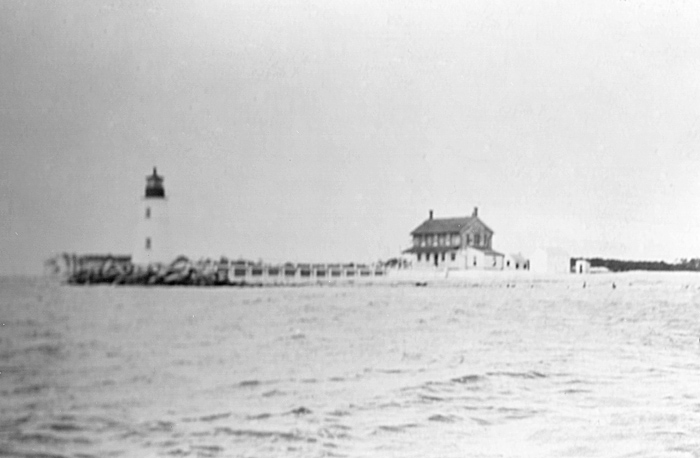 1829  To enable the Secretary of the Treasury to provide, by contract, for building a light-house or beacon light at a point of land at or near Back River Point, on the Chesapeake Bay, in the State of Virginia, March 2, 1829, $5,000.

1850  Back River Point light-house  10 lamps; William Jett, keeper; supplied June 21, 1850. Repairs and improvements have been made and put on to this establishment the year past. Door to the towers has been raised, steps partly made new, and a bridge of joist and plank, with a railing, made from the dwelling to the light-house. The land, which is very low and subject to be overflowed in heavy storms, is washing away; lamps and reflectors are good, but the chandelier is poor. A new kitchen has been built.
Left June 18, 1849 374 gallons of oil. Found on hand 40. 334 consumed in 368 days is equal to 331 gallons per year, or 33 1/15 gallons per lamp.
Delivered 228 gallons spring oil, 128 gallons winter oil, on hand 36, for total on hand of 392
50 tube glasses; 25 yards cloth; 1 gross wicks; 1 buff skins; 1 pair scissors; 1 box soap;1 oil butt; 1 hand lantern; 1 file; 12 burners complete.
2 spare lamps, in good order; common burners; 13 and 14-inch reflectors.

1851  BACK RIVER LIGHT. June 20, 1851.
Revolving bay light; also for Back river harbor. William Jet, principal and only keeper; twenty-two years keeper. Is now sick; saw his son, but not the assistant keeper. Questions generally answered by son, who does not reside here, (son about-thirty years of age;) assistant appointed by keepernegro man.
Brick tower, leaks on platform above; wooden stairs; wooden tube for weight; revolving light, without air-fly to regulate it; will not start of itself; sometimes gets out of order; is not now in good order.
Light was reported as out when it stopped once; collector inspected it once; no repairs made; lamps arranged on two opposite parallels, three below and two above; lamps like those of Cape Henry, nearly; reflectors small, thirteen inches; three of them old; seven of them fourteen-inch; burners as usual; mirrors clean; wicks well trimmed; tower moderately clean; lantern small; glass 12x9, small panes; lower row iron.
Astragals thick iron; dome black inside; ventilated by small holes below; shuts trap-door when he goes out; establishment moderately clean; tower whitewashed inside and out; wood-work painted lead color; keeper's dwelling in very good order; wants whitewashing; oil in lower part of tower; house raised by blocking around, say three feet high; bridge to light-house say sixty yards long. In a late storm, water washed away the garden and rose to near the top of wharf. Around the tower is wharfing, filled in with stones and mortar; done by Gibbons by contract; wall of tower is hollow, filled in with bats; oil-cans want painting; moderately clean; foundation (?) clay soil, below sand. Average consumption is twenty-four gills (three quarts) per night of oil; supplies furnished annually by Captain Howland; lights up at dark and puts out after daylight; wipes off the snuff; trims at ten and two oclock; winds up clock-work for revolving at the same time; sits up until ten oclock; wakes up regularly; no regular watch kept; no place to stay in; very warm now; uses stove sometimes; has heaters which are used, and stove also; does not know of any instructions; makes returns to collector quarterly.
Cape Henry, Willoughby's Point light-boat, New Point Comfort, and when the weather is good the Wolf-trap light-boat, are seen from the top of the tower; no special record is kept.
The colored man has been engaged in light-keeping since his boyhood. Walls of tower of good brick; cracks pointed up; there are white curtains to go up; site of light-house in danger from the sea; cistern in good order, but spouts leading to it in bad condition; depends upon rain-water; no cloth for coversonly for wiping.

1855  Black river, Chesapeake bay.A new revolving machine and reflecting illuminating apparatus, consisting of 6 21-inch parabolic reflectors and 6 fountain lamps, were substituted for the old apparatus of 10 lamps and 10 14-inch reflectors, on the 20th March, 1855, which adds very much to the brilliancy and efficiency of this light.

1860  In the fifth light-house district, extending from Metomkin inlet, Virginia, to New River inlet. North Carolina, and embracing the sounds of North Carolina, new lanterns have been placed at Black river, Point Lookout, and Ocracoke light-houses.

1863  The light-houses at Craney Island shoal, Back river, and Cape Henry have been repaired, renovated, and refitted, and are now in operation, the important light at Cape Henry being protected from the enemy by a military guard detailed by the general commanding at Fortress Monroe.

1868  Back river.Entrance doors refitted with new locks and hinges; steps to porch repaired; new glass set in windows; lantern and wood-work painted inside and out two coats; house and tower whitewashed; rip-rap stone collected and placed around the tower to serve as a breakwater; old guard-house on the beach moved up to the dwelling for use as an outbuilding.

1869  Back River.Generally in good condition. A lightning rod is required for the keeper's dwelling.

1878  Back River, south side of entrance to Back River, Chesapeake Bay, Virginia.The tower, which was in a very dilapidated condition, a portion in front having been undermined and thrown down by the action of wind and waves, was thoroughly repaired in August and September. Small stones were carefully packed about the foundation, and on the top of these 100 cubic yards of riprap stone, weighing from 1,500 to 3,000 pounds each, were placed to prevent further damage to the structure. Minor repairs were made to the keeper's dwelling at the same time, leaving the station in good order. No damage was done by storms during the rest of the year.

1881  Back River, south side of entrance to Back River, Virginia.A new kitchen floor was put in. As an experiment to prevent the drifting of the sands from about the tower, movable screens were made and placed; this was but partially successful; experience in placing them may render them more efficient.

1888  Back River, entrance to Back River, Virginia.In September 450 cubic yards of riprap stone were deposited around this structure to protect it from the advance of the sea.

1894  Back River, entrance to Back River, Virginia.The keepers dwelling, which was too small to accommodate his family, was enlarged by the addition of another story and by other improvements, so that three habitable rooms were gained. Various repairs were made. The small building used as a kitchen by the working party was left as a summer kitchen for the keeper.

1899  Back River, entrance to Back River, Virginia.The cistern house was practically rebuilt, and the rear porch and the elevated walk leading to the tower were repaired.

1904  Back River, Chesapeake Bay, Virginia.The concrete protection wall around the keepers dwelling was completely wrecked on the sea front. Temporary props were set in against that portion of the old wall still standing, and sheet piles were put in in front of the wall to prevent the seas from undermining it. A bulkhead about 459 feet long, composed of sheet piling, backed by round piles 16 feet long, was built along the front and sides of the dwelling, outside of the lines of the old concrete wall. Fifty-five pine piles and 30,440 feet of lumber were used, 88 screw bolts, 85 drift bolts, 4 strap bolts, and 38 iron washers were made for securing the timbers in place. The piles and timber were coated with a wood preservative before placing in position. The elevated walk to the tower, 144 feet long, leading from the dwelling, was rebuilt. About 135 running feet of fence was built. During a very severe storm in October, about two weeks after the construction of the bulkhead had been commenced, the dwelling and the elevated walk leading to the tower narrowly escaped destruction. The repair party, by working day and night for three days, succeeded in saving the dwelling and supporting the walkway so that the light might be maintained. Seas dashed to a height of 14 feet against the porch of the dwelling and moved from their places large stones near the tower. The tin roof was partly torn from the dwelling, and the gutters and down spouts were carried away. The tender Thistle parted her anchor lines and went ashore, with a quantity of lumber, which had to be thrown overboard in order to float her, but which was subsequently recovered. She was considerably damaged. The pile driver also went aground well up on the beach, but was afterwards floated without damage. Extensive general repairs were made.

1956  Hurricane Flossy destroyed Back River Lighthouse on September 27, 1956, leaving just a pile of stones in the surf.

For a larger map of Back River Lighthouse, click the lighthouse in the above map.

There is a historical marker at the end of Beach Road that gives a history of Back River Lighthouse Ruins, but the actual site is located just under a mile to the northeast.

Find the closest hotels to Back River Lighthouse