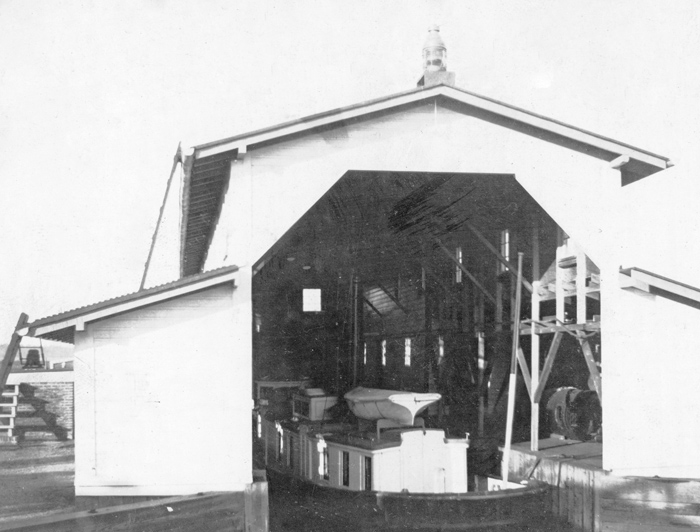 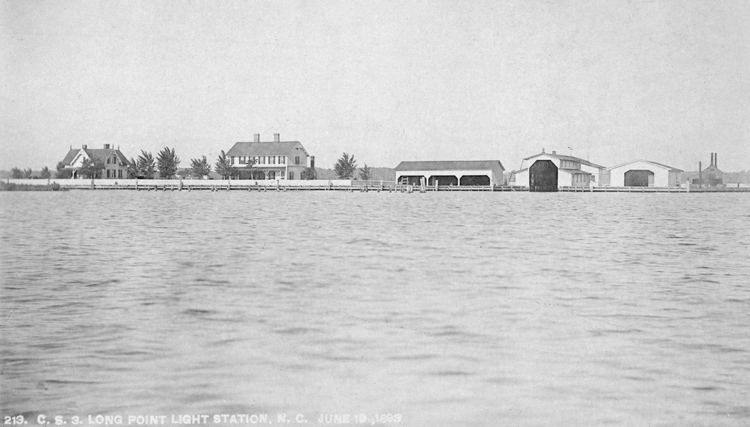 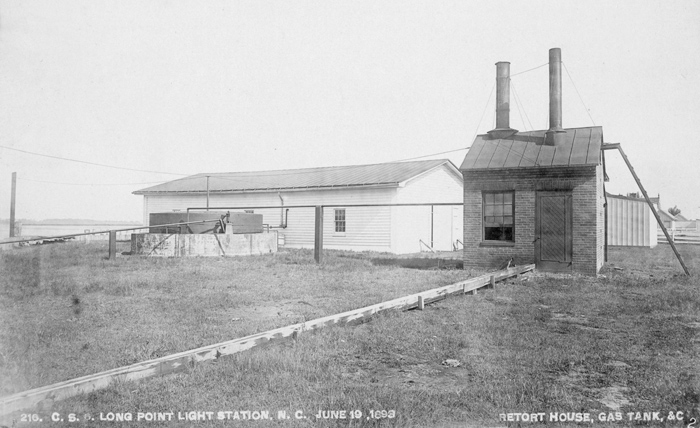 1879  Lighted beacons in North Landing River, Virginia, and Currituck Sound and North River, North Carolina.Ten lighted beacons on the line of inland navigation, between Norfolk and ports in North Carolina, were placed in their proper positions in April. One of the beacons shows its light from the top of the keeper's dwelling, a frame structure, at Long Point, Currituck Sound. Each of the rest consists of an iron sleeve-pile, cast with a screw, the sleeve fitting over a wooden pile driven into the shoal. To the top of the sleeve, 3 feet above water, an iron column, 12 ½ feet in length, is bolted, which supports a lantern and the ladder for reaching it. Each beacon is protected from damage by vessels or rafts, by from three to eight fender-piles driven around it and connected by pieces of Georgia pine, 1 foot by 3 inches, securely spiked to the fender piles. The lights will be exhibited on July 15, 1879, and will be regularly kept up by the steam-launch Bramble.

1881  Beacon-lights in North Landing River, Virginia, and Currituck Sound and North River, North Carolina.The new keeper's dwelling at Long Point was commenced in the latter part of January and completed by the middle of February. It is a frame structure built on a pile foundation and contains six rooms. A detached kitchen was also built, affording, with the old dwelling, ample accommodations for the keepers of the beacon-lights. At the same time the old building was repaired where needed, and the plastering renewed, making the house very comfortable. The old wooden barn was underpinned and moved back to a proper position, affording a good barn for cows and additional store room. The inclosures to the dwellings were nicely graded, sown with grass seed, planted with willow, oak, pine, holly, and smaller shrubbery, and provided with neat fences, painted and whitewashed. The barn was also inclosed, affording the keepers a good yard for cattle. The Foster system of lighting the beacons by compressed gas was introduced during the year. A brick cistern, for use in storing the gas, was built on the light-house premises at Long Point. Three cylinders were securely bolted to each screw-pile forming the beacons, into which might be forced the compressed gas. A small house, with shingled roof and brick floor, was built for a retort. The system, with the exception of the clock work, which failed, has now been in operation for about six months, the gas burning continuously, and generally gives satisfactory results, but some improvements are still necessary. A frame building, with slip, 75 feet long and 10 feet wide with wings 7 feet wide, making a total width of 30 feet, was constructed in March, as a boat-house for the steam launch Bramble, in attendance on the beacons, and a scow with gas storage tanks. A plank way was laid under the wings. An auxiliary boiler was placed in the boat-house, to furnish steam for running the compressor, used in filling the storage-tanks on the scow. A portable forge, with various tools and supplies, was supplied the station. The beacons at Mackay's Island, Green Point, and Bell's Island were carried away by the ice. They were replaced in February.

1918  On December 5, William J. Tate, keeper of North Landing River, etc., aids (N.C.), furnished lodging to seven men of an aviation corps who arrived at the station in an open boat en route to Manteo, N.C., and again on December 12, on their return from Manteo.

1919  On June 5, W.J. Tate, keeper of North Landing River, etc. aids, North Carolina, went to the assistance of a disabled launch and towed it to a beacon and assisted in restoring the motor to working condition.

1919  W.J. Tate, assistance rendered yacht Linnie, which had run aground.

1920  As the keepers quarters at Currituck Beach Light Station, N.C., have been inadequate for a number of years, it was decided to relieve the situation by moving an unused dwelling at Long Point Light Station N.C., across Currituck Sound and placing it on a new foundation at Currituck Beach.
On account of the isolation of both places it was carried out by the district construction force and the purchase of materials. The workmen occupied the dwelling during the entire time. Bunks, bedding, cooking utensils, etc., were provided and a cook and mess attendant employed.
The dwelling, which is a single frame dwelling, two stories in height, with porches front and rear, stood about 50 feet back from the edge of the canal or dredge cut in front of Long Point Lighthouse Reservation. It is about 33 by 34 feet and weighs about 40 tons. The large, brick chimney was first removed, and then the house was elevated above the brick piers on which it rested. Two flush-deck scows, 20 feet beam and 50 feet in length, were secured in the canal abreast of the dwelling and three 6 by 12 inch yellow-pine skids were placed directly under the sills of the house and extended out to the sea wall and over the scows. The skids were blocked up so that when the scows were displaced by the weight of the house their shore ends would clear the sea wall. Twelve wrought-iron rollers, 8 inches in diameter and 30 inches long, supported the house on the sills, and two triple blocks and falls were employed to move it out on the scows.
The scows and their load were then towed across the sound to the light station, a distance of 10 miles, by two small motor boats, the time consumed being about 14 hours. The structure was brought ashore at the nearest point to the light station, about five-eighths of a mile, which could be reached without building a wharf. Blocking, skids, and rollers were again employed and an improvised windlass with two lever arms furnished the power. By anchoring the windlass securely a sufficient distance ahead of the dwelling each time it was shifted, it was easily moved to the new site by two men on each lever arm.
The work of removing the dwelling was started at Long Point on December 13, 1919, and was completed at Currituck Beach, together with repairs on the wharf there, on March 23, 1920. The work of moving the dwelling, rebuilding the chimneys, building the piers and painting cost about $4,000.

1921  William J. Tate, keeper of North Landing River, etc., aids, assisted in floating a laden schooner, a scow, and a small yacht, which were stranded in vicinity of reservation. Happened on March 10, 22, and 25.

1921  William J. Tate, keeper, floated a submarine chaser which had grounded near the station, and towed barge, with rescued crew of burned tugboat on board, to landing. Happened on April 15, 1921.

1921  On December 4 and thereafter, W.J. Tate, keeper of North Landing River, etc. Lights, N.C., rendered assistance to yacht Cruz del Sur which had run ashore at Long Point, N.C. The yacht remained ashore for about 21 days, and during this time the keeper worked with its crew whenever it was possible to do anything.

1935  SEVERE WEATHER CONDITIONS IN INTRACOASTAL WATER- WAY The letter quoted below from the keeper of North Landing River Aids Light Station, Coinjock, N.C, gives some idea of the unusual severity of weather conditions experienced along the Intracoastal Waterway during the latter part of December: This station and section still under 6 inches of snow. Navigation absolutely closed between this point and Norfolk through Government Intracoastal Waterway. Temperature 7 a.m., December 26, 10°, a fall of 23° in 7 hours. The above conditions are extremely unusual in this latitud

Formerly located the western side of the cut of the Albemarle and Chesapeake Canal through Long Point.
Latitude: 36.398655, Longitude: -75.95437

For a larger map of Long Point (North Landing River) Lighthouse, click the lighthouse in the above map.

Remains of the station can still be seen on Long Point.