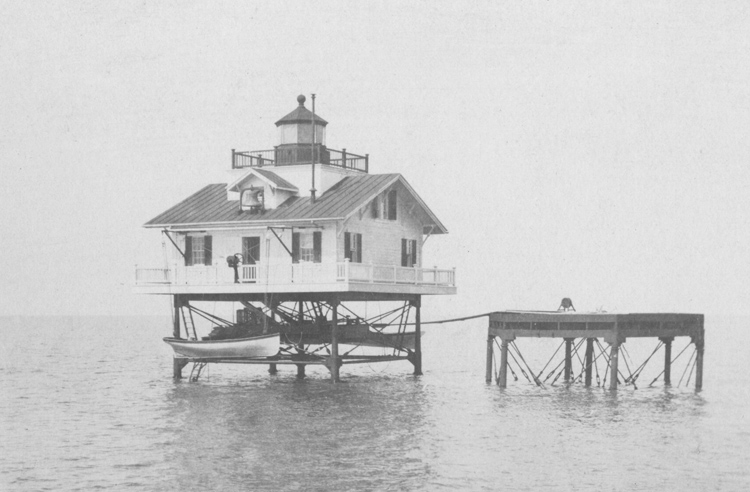 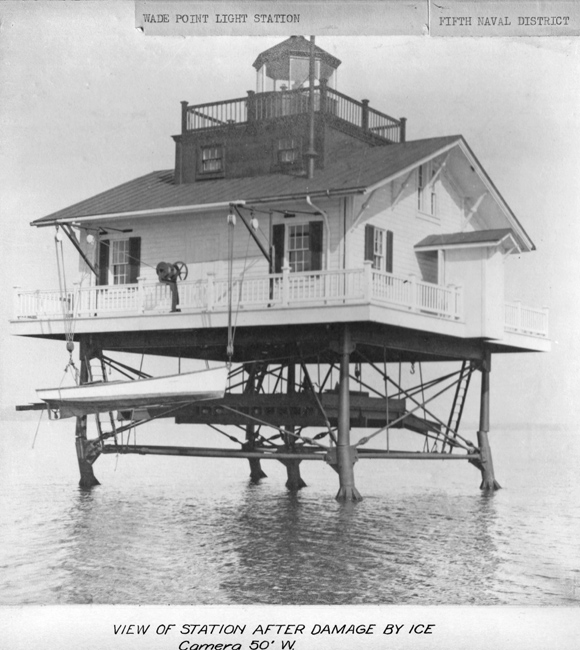 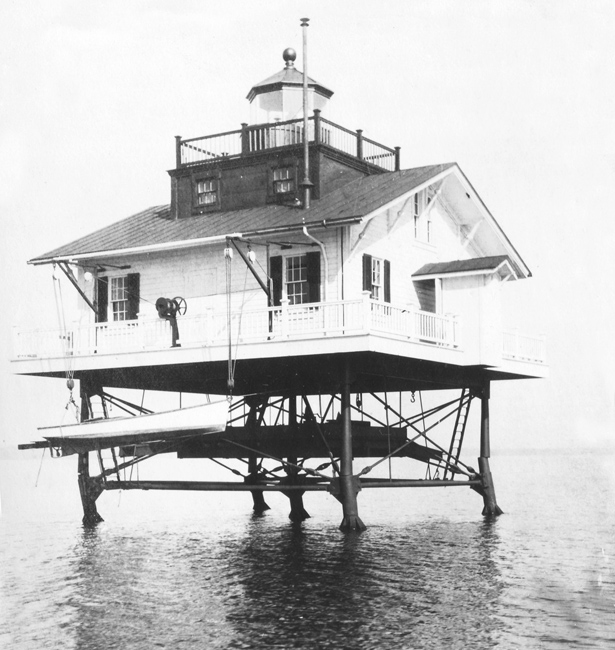 1855  Wades Point  This vessel was removed and condemned. A screwpile lighthouse will be substituted. At present, temporary rod lamps are exhibited at that station.

1856  The following light-houses have been completed during the year: at Seven-foot Knoll, (mouth of the Patapsco river, Maryland,) Jones' Point, (on the Potomac,) Wade's Point, (mouth of Pasquotank river,) Cape Hatteras beacon-light, and beacon-light and fog-bell at Old Point Comfort.

1863  In August last the light-house at Cape Charles was visited by a party of guerrillas, who completely destroyed that light; carrying away such portable articles as they deemed valuable. The new tower authorized for that station had, at the breaking out of the rebellion, progressed in construction to a height of 83 feet; the greater part of the materials to complete the tower to its proper height (150 feet) being on the ground, stored, ready for future use. During the rebel occupancy of this part of the peninsula the articles which had been thus stored were subjected to indiscriminate pilfering and spoliation, so that a new provision will have to be made. It is the earnest desire of the board that means may be provided for the resumption of work at this highly important station as early as possible.
Wade's Point light-house was visited in like manner, and the wooden superstructure entirely burned. This light had been re-established under the assurance that its continuance would be secured by military protection, and, having been destroyed, the board does not deem its reconstruction advisable until it can be maintained beyond peradventure.

1863  The light-house at Wade's Point was also re-established, but early in May last it was visited by a guerrilla force from the main land and again destroyed.

1864  The light-house at Wade's Point, whose destruction for the second time was alluded to in the last annual report, has not been re-established, the danger of a recurrence of injury from the rebels not yet having been entirely removed. The interests of commerce at this time will not materially suffer from its not being lighted.

1867  The light-houses at Wade's Point and Croatan, the superstructures of which were burnt by our own troops, and that at Pamplico Point, which had been extinguished by the rebels, have been restored and are now lighted.

1879  Wade's Point, west side of Pasquotank River, North Carolina. The running ice in January broke the lugs of the casting holding the lower ends of three of the tension-braces. The lugs are 6 feet below the surface at ordinary tide. The old braces were removed, and taken to New Berne, North Carolina, where new threads were cut on them, and new threads were run in the nut on the turnbuckle. There being no way to repair the lugs, a section of 1-inch iron chain was passed around the pile, below the horizontal braces and broken lugs, and the two ends connected to the lower end of the tension-brace by means of heavy wrought-iron clevises. This work was done by a diver. The distance from the ends of the brace thus attached to the upper lug was then measured and the other ends of the braces brought to Baltimore, where they were cut to the proper lengths. They will be replaced before winter, when it is thought they will be as strong as when first placed.

1883  Wade's Point, west side of Pasquotank River, North Carolina.A fog-bell operated by machinery, striking two blows in rapid succession at intervals of 20 seconds, was established in February, new boat-hoisters were set up, and several minor repairs were made. The station is in good condition.

1897  Wade Point, Albemarle Sound, North Carolina.An additional landing ladder was set in place and a storage platform was constructed under the dwelling.

1898  Wade Point, Albemarle Sound, North Carolina.This light-house was built in 1856. As it shows signs of weakness and decay, steps are being taken to rebuild soon. Borings were made in January, 1898, to ascertain the character of the foundation at the site, and the plans for the structure were commenced. Drawings and specifications for the metal work were completed in February, 1898, bids were asked for in March, and a contract was made in April. The plans and specifications for the woodwork and for the erection of the light-house at the site were approved on June 24, and are now being printed for issuance to bidders.

1899  Wade Point, Albemarle Sound, North Carolina.At the date of the last annual report the construction of the metal work required in the rebuilding of this light-house was in progress under contract, and the printing of the plans and specifications for the erection of the structure had been commenced. On August 26, 1898, the metal work was all delivered at the Lazaretto light-house depot. A contract was made for the erection of the light-house at the site with the lowest bidder. The contractor with his materials and working plant arrived at the site November 25,1898, and the construction of the temporary platform from which the erection of the light house was to be carried on was begun the next day. The pile foundation, or substructure, was in place January 7. The framework of the superstructure was raised January 14. The exterior, including tin work, was completed on February 18; the fuel platform and most of the inside work, February 28, and the entire structure, including painting, on March 14a week earlier than the time stipulated in the contract. The work was creditably done in every respect. After its completion the old light house, except the pile foundation, was dismantled and removed. The lens, being out of repair, was not transferred to the new structure, but was retained for use elsewhere after being put in order. The fog bell and striking apparatus, the boat hoisters, the supplies and keeper's outfit, their furniture, etc., were removed to the new house, the new lens apparatus provided for it was placed in position, and the new light was shown for the first time April 17,1899. The structure is composed of a two-story square wooden dwelling, with a gable roof, resting on a substructure consisting of five wooden piles provided with cast-iron sleeve columns fitting over them, and braced and tied together by means of beams, struts, and tie rods, and supporting an iron lantern, with a copper roof, from which is shown the light, 39 feet above mean high-water level.

1919  Wade Point Light Station, N.C., situated in the northeastern part of Albemarle Sound was subjected to heavy pressure from ice in the latter part of January,1918. The structure consists of a frame dwelling surmounted by a lantern and supported by five cast-iron columns and sleeves over wooden piles, the columns being braced by wrought-iron sockets and tie rods above the water line. There is not bracing below water, which is about 9 feet deep. The ice piled upon one side of the structure and pushed it over in a northwesterly direction, fracturing all five of the columns just above the lower sockets, which are about 3 feet above water. The house and columns above the fractures remained practically level and plumb, but the columns and sleeved piles below were pushed over to an angle of about 15 to 20 degrees with the vertical. The fractured parts of the columns remained close together, however. No damage was done to the house; not a door was jammed nor a pane broken.
Two plans were under consideration for restoring the station  one to rebuilt the substructure anew on its original lines and the other to placed a frame concrete-filed caisson alongside and transfer the dwelling to it. Bids received in both cases were so excessive as to cause rejection, and it was decided to repair the columns of the old structure by casting them together as they then existed without and effort being made to straighten up the structure, and placing riprap about it and over the site.
The working part arrived in the Holly at the station on August 19. Each corner was successively jacked up in order to take the weight off the columns preliminary to making the cast. Each fracture was then cut out so as to leave a gap of about 1 ½ inches and a small handhole cut in the column above it to accelerated the work. The interior spaces of the columns for about 3 to 5 feet below the fractures and 1 foot above them were willed with molding and facing sand, well rammed in, the latter extending 6 inches above and below the breaks. A wax patter was then formed about each fracture 6 inches wide, ¾ inch thick outside the column, and 1 ½ inches thick inside. A mold box was fitted about the column and rammed up, with a pouring gate and proper number of heating gates, risers, and vents. The mold box was long enough to project under a crucible resting on a staging, the crucible being charged with a patented cast-iron material. A preheating of the mold of two and one-half hours duration was followed by igniting the charge in the crucible, which was tapped when the reaction was complete and the mold filled with the liquid metal, producing a good joint at each fracture. The whole work was completed September 5, about three weeks after it was started.

1920  The act of March 28, 1918, appropriated $150,000 for rebuilding, repairing, and reestablishing aids damaged by storm and ice, from which $100,000 was allotted to the fifth district. The act of November 16,1918, appropriated $300,000 additional for the same purpose, from which $284,000 was allotted the fifth district. The restoration of light stations in the fifth district damaged by ice floes during the winter of 1917-18 was continued during the past fiscal year by depositing riprap at nine light stations, building up existing protective works near or around these stations, or constructing new barriers or ice breakers, and by constructing new foundations and inserting bracing under several screw pile lighthouses, as follows: At Wade Point Light, Albemarle Sound, N.C, the broken foundation piles were welded in position by a patented process, thus restoring their original strength; subsequently a deposit of 600 tons of riprap stone, to add stability to the station, was made.

Formerly located on a shoal making off from Wade Point on the western side of the entrance to Pasquotank River in Albemarle Sound.
Latitude: 36.156308, Longitude: -75.97742

For a larger map of Wade Point Lighthouse, click the lighthouse in the above map.

A structure appears near the location of the former Wade Point Lighthouse.