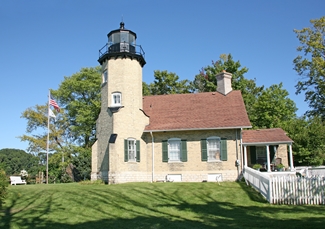 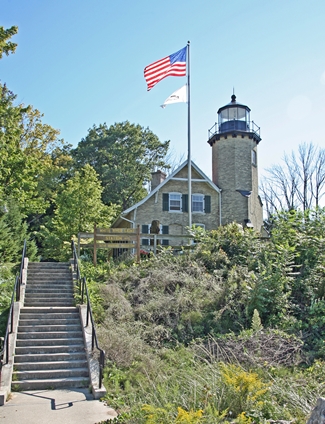 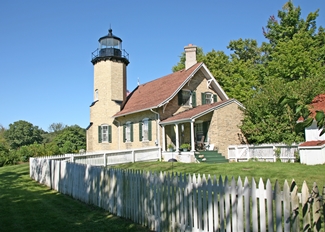 White River is nearly twenty-four miles in length and passes through White Lake before emptying into Lake Michigan. In 1675, Father Pere Marquette stopped in the area and learned that the Native Americans called the stream Wabish-Sippe, meaning the river with white clay in the water, which gave rise to the names of White River and White Lake. The cities of Whitehall and Montague are located on opposite sides of the river at the head of White Lake and were first settled by Europeans just before the Civil War. In 1867, the Michigan legislature passed a resolution calling for its senators and representatives to Congress to use all honorable means to procure an appropriation of money for the completion of the harbor of White river. Their effort was successful as $57,000 was appropriated that year for improving the harbor, which would be necessary before the $10,000 that had been granted the previous year for a lighthouse could be spent.

In 1868, the Lighthouse Board noted, The harbor works at this place are not yet sufficiently advanced to warrant a final decision concerning the character of the requisite buildings and their exact site. On July 12, 1870, Congress passed an act requiring that all non-permanent appropriations had to be spent or contracted out during the year they were made. As a result, the $10,000 appropriated in 1866 for a lighthouse reverted to the treasury.

Parallel piers at the mouth of White River were completed early in 1871, and later that year a pierhead light was established on the south pier. A fifth-order Fresnel lens was used inside a twenty-seven-foot-tall tower to produce a fixed red light that could be seen for roughly eleven-and-a-half miles out on Lake Michigan. William Robinson, the lights first official keeper, began his service in 1872. Noting that no dwelling had been provided for the keeper, the Lighthouse Board requested $4,000 in 1872 to remedy this problem.

In recommending a $15,000 appropriation for another lighthouse at White River, the Lighthouse Board noted the following in its annual report for 1873: Very large interests, especially in lumber, are centered here, and a larger light than the present pier light should be placed here. The vulnerability of the pier light was made manifest on December 4, 1873, when a small storehouse at the base of the tower was washed away in a storm.

The requested amount for a new tower and keepers dwelling at the mouth of the river was provided on June 23, 1874, and by the following summer title to the necessary land had been obtained. Construction of the lighthouse began on August 28, 1875, using a Norman Gothic design that had been used on Chambers Island, Wisconsin and would later be used at several other Great Lake locations, including Eagle Bluff, McGulpin Point, Eagle Harbor, St. Clair Flats Canal, Passage Island, Sand Island, and Squaw Island. E. Rhodes, a construction foreman for the Lighthouse Service, oversaw the work, but Keeper William Robinson pitched in and did some of the masonry work himself.

When completed, the lighthouse consisted of a tower set in the northwest corner of a gabled-roof, one-and-half-story dwelling. Limestone was used for the foundation and yellow brick for the superstructure. Though square at its base, the towers corners are beveled mid-way up to create an octagonal form. Work on the lighthouse wrapped up on December 28, 1875, and the following April, Mr. Crump, the district lampist, arrived to install a fourth-order Fresnel lens in the lantern room. Keeper Robinson activated the new light, whose characteristic was a fixed white light, varied every minute by a red flash, on May 13, 1876. The period of the flash was reduced to forty seconds on December 12, 1892, through the fitting of another flash panel to the lens, and then in 1902, the lights characteristic was changed to alternate red and white flashes, with twenty seconds between each flash.

As the piers at the mouth of the river were extended, the pierhead tower had to be relocated. In 1880, the beacon was moved 100 feet lakeward and a corresponding amount of elevated walkway was built, along with an extra 226 feet to replace a section that was carried away by a storm. The tower was moved another 150 feet in 1884, and the elevated walk was extended to it.

Given their exposed location, the pierhead tower and elevated walkway suffered significant damage over the years from a variety of sources. On August 15, 1877, Keeper Robinson recorded the following in his log: The steamer Tempest entered this harbor and a spark from her smoke stack fell into the pier and burnt the foundation of the frame of the South Pier-head Beacon Light. Shallow water in the channel between the piers caused two schooners, the Lillie Pratt and Ella Ellingwood to collide with and damage the elevated walk in April 1890. A piece of driftwood tossed up by violent waves in December 1904, broke a section of the walk. In August 1911, the elevated walkway was struck by lightning, and the pierhead tower suffered the same fate in July 1916.

A brick oil house with a metal roof and door was added to the station in 1902, and in 1917, the color of the pierhead tower was changed from white to red. The main light was electrified in 1918 and its characteristic changes to an occulting white light alternately on for ten seconds and eclipsed for ten seconds.

In 1919, eighty-seven-year-old Keeper Robinson was told that he had to retire and let William Bush, his grandson who had been serving as his assistant, take charge of the light, but the feisty octogenarian wasnt going to leave the lighthouse he had called home for over forty years. As the inevitable became clear, Keeper Robinson fell into a terrible depression, and it seems he willed himself to die before he had to leave. An old newspaper clipping details the end to the saga: On the final day of his stay at the lighthouse he died, peaceably and quietly. Hundreds of people whom he had aided in time of trouble came to grieve with the family, for Capt. William was more than an honored resident of the White Lake community. He was an institution. Keeper William and his wife Sarah were the parents of thirteen children.

By the 1920s, heavy seas and ice had taken their toll on the wooden piers, and to top this off, on June 20, 1924, Keeper William Bush noted in his log that he had to spend two hours during the night fighting a fire in the south pier. With the south pier settling and breaking up, the metal walkway was taken down during the spring of 1925. At the same time, the light in the pierhead tower was changed to acetylene supplied by a tank, so it wouldnt require daily attention. Another fire broke out in the pier on September 9, 1928 that necessitated a call to the Whitehall fire department.

New stone and concrete piers were put in place in 1930, and a thirty-one-foot-tall metal, skeletal tower replaced the faithful wooden tower, which was, according the keepers log, wrecked to pieces. The metal pierhead tower was electrified in 1939, and then replaced with a steel pole in the late 1980s.

Frances Marshall served as assistant keeper of the lighthouse in the 1940s while her husband, Leo Wuori, was keeper. After the couple divorced, Frances remained at the lighthouse and served as keeper from 1949 to 1954. In 1953, she traveled to New York and appeared on the TV show Whats My Line, where the panel of celebrities was unable to guess her occupation. She is known for being the last female lighthouse keeper in Michigan.

White River Lighthouse was deactivated in 1960 and turned over to the General Services Administration. Fruitland Township expressed an interest in the property in 1965, and the government agreed to sell it for $6,250, half of its appraised valued. The Sylvan Beach Association, comprising owners of nearby vacation property, raised the necessary funds, and in 1970 the property was opened as a museum.

In 1983, Karen McDonnell became the fourth in a string of curators that ran the lighthouse museum. With a degree in museum history, McDonnell expanded the collection of artifacts at the lighthouse, oversaw detailed restoration work, and documented the stations history. Every third grader in the local school district visits the lighthouse and learns about the local shipping and lighthouse history in school, thanks to a curriculum developed by McDonnell. Though the pay isnt great and she has to live in cramped quarters at the lighthouse with her family, she loves her job.

Can I say when I am done with my life that I put a good chunk of it into something that I felt was worthwhile, and that it did something for other people that made a change in their lives and thinking? McDonnell asked. I have people that literally have walked into the museum and have never been in a lighthouse and its changed their life coming in here. Changed their life.

As an example, McDonnell mentions a man who came in one day and said, My wifes greatest goal is to get to the top of a lighthouse tower. And shes had MS for years. To which, McDonnell confidently responded, Well we will make it happen today.

With the husband in front and McDonnell behind, the wife slowly ascended the forty-four steps in the towers circular staircase, and when she reached the lantern room, she broke down and wept. Her goal had been accomplished.

Karen McDonnell received the Kaplan Award in 2002 for helping preserve a part of the Great Lakes as a resource and destination. With over thirty years of service at the light, McDonnell is a modern day lighthouse keeper and deserves to be mentioned right along with Keeper Robinson and his grandson.

In 2012, the board of Sable Points Lighthouse Keepers Association signed an agreement with Fruitland Township to operate the gift shop and museum at White River Light Station. The association is expected to continue the employment of Karen McDonnell. The budget-strapped township had been spending around $40,000 annually operating the lighthouse, a figure partially offset by $10,000 in admissions revenue. Roughly $22,000 of the annual cost funded the caretaker position.

For a larger map of White River Lighthouse, click the lighthouse in the above map.

From Highway 31 south of Whitehall, exit onto White Lake Drive and proceed west. When the road tees at the lake, turn left onto Shore Drive and follow it around White Lake. When you get to Scenic Drive, proceed straight through the intersection where the road will become Murray Road. Follow Murray Road as it turns north and leads to White River Lighthouse, which is down a short road to your left near the end of Murray Road.

White River Lighthouse is open from Memorial Day weekend through the end of October. For hours, visit their website or call (231) 894-8265.

A fourth-order Fresnel lens used in White River Lighthouse is on display at the lighthouse.


One of our trips to this lighthouse occurred right before sunset on a cold February evening. With a slight wind, it was quite frigid even being bundled up in winter wear. I can't imagine how the beautiful white swans spend the winter in the cold water surrounded by floating blocks of ice. Haven't they heard about flying south?