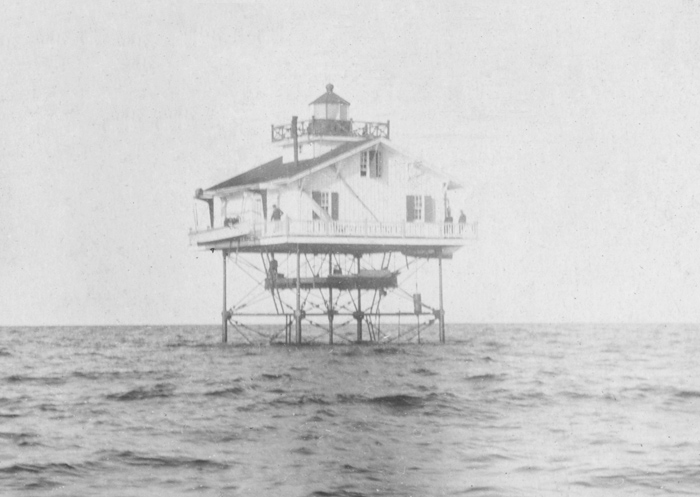 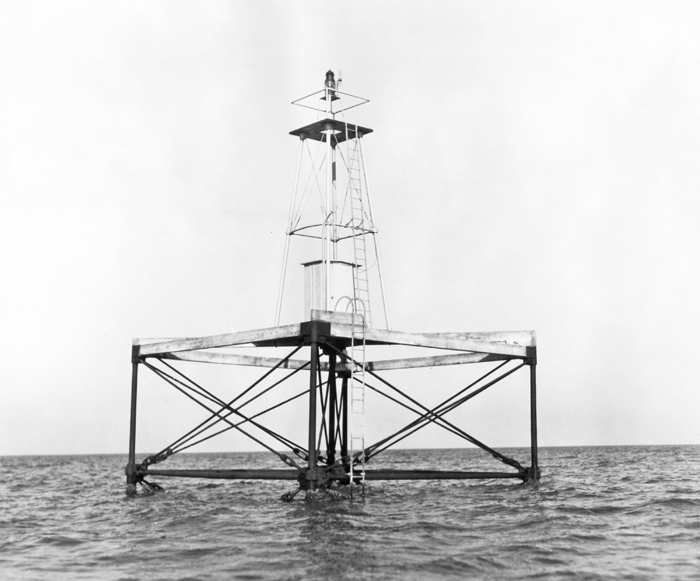 Established in 1826 by a light-vessel.

1855  Royal Shoal  This vessel was fitted with a Costan lamp at the same time the Long shoal vessel was.

1864 - The light-vessel formerly marking Royal shoals, North Carolina, was removed by the rebels in 1861, and sunk as part of the barricade in Neuse river; but after the capture of Newborn by the United States forces, she (with two others) was raised. She was subsequently brought to Baltimore, thoroughly repaired, and is now employed as a relief vessel for the district.

1867  Royal shoal.This vessel was destroyed by the rebels at the beginning of the war. The site formerly occupied by it being suitable for that of a screwpile light-house, the station was re-established by the erection of one, from which a light was exhibited for the first time on the night of the 30th April, 1867.

1868  Southwest Point of Royal Shoals.Iron-work of foundation painted two coats and the outside of superstructure one coat; lantern painted inside and out; new glass set where required.

1869  Southwest Point Royal Shoals.Screw-pile light-house; iron work cleaned of rust and painted; outside of house and outside and inside of lantern painted, as well as lantern deck and balustrade; glass reset, and material for boat's falls supplied.

1890  Southwest Point Royal Shoal, Pamplico Sound, North Carolina. In December, 425 cubic yards of riprap stone were put under and around the light-house to strengthen it and check the erosion of the site, which had recently been considerable. Some minor repairs were made.

1914  A.J. Simpson keeper of Southwest Point Royal Shoal Light Station, N.C., has been commended for the efforts made by him on July 31 with the station sailboat to assist a disabled motor boat, which was finally towed to port by a power boat.

For a larger map of Southwest Point Royal Shoal Lighthouse, click the lighthouse in the above map.

No evidence of the lighthouse is believed to remain at the site today.