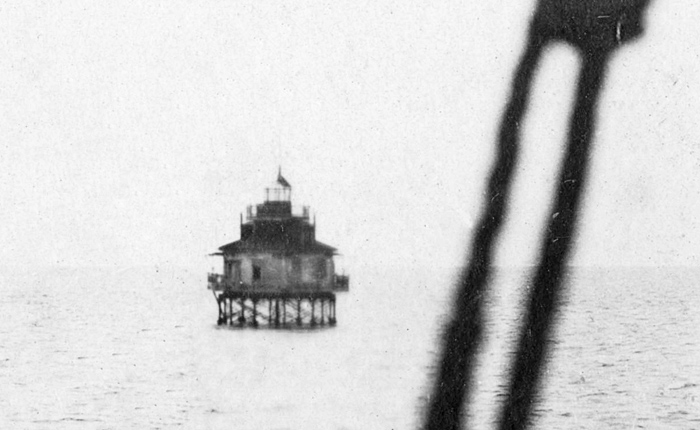 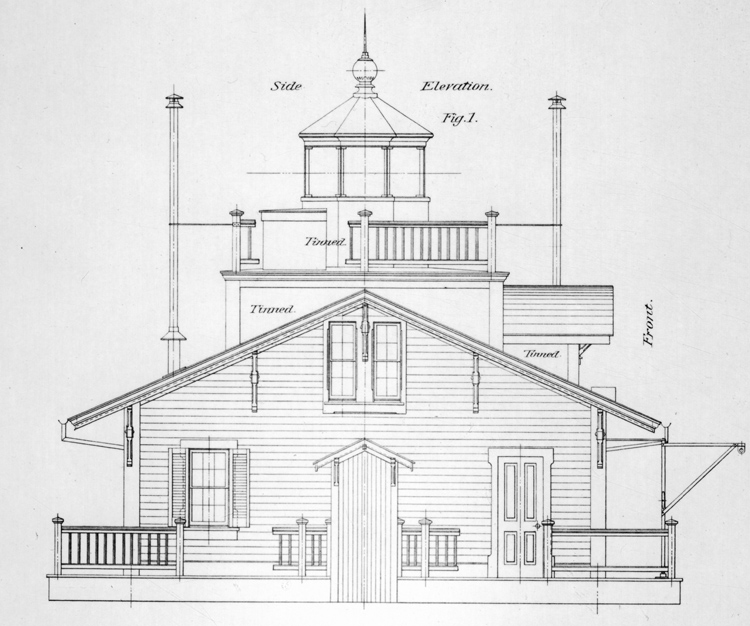 1857  The new light-house on iron screw-piles foundation authorized to be built at the northwest point of Royal shoals, the beacon on Hatteras point, at Fort Washington, Potomac river, and the small light in Norfolk harbor, near the naval hospital, have been completed and lighted.

1863  The light-houses at Roanoke marshes, northwest point of Royal Shoal, Croatan, Cape Lookout, and Ocracoke have been refitted and the lights re-exhibited.

1869  Northwest Point Royal Shoals.Screw-pile light-house; iron work cleaned of rust and painted; roof of house and inside and outside of lantern painted, and lantern platform repaired.

1882  Northwest Point Royal Shoal, Pamplico Sound, North Carolina. The superstructure of this light-house was in such a dilapidated condition as to require rebuilding. Work was commenced at the depot in November, and the superstructure was ready for transportation to the site in January. The loading was completed on the 9th, when the tender Jessamine went south. The keepers property and family were removed, as-well as such appurtenances and portions of the light-house as were of value. The superstructure was then removed by burning. The work was completed on the 25th. The water being shallow at the site, a suspended scaffold was placed under this station, giving ample room for storing oil, empty cans, and fuel, and adding much to the keeper's comfort in so small a house.

1889  Northwest Point Royal Shoal, Pamplico Sound, North Carolina. Soundings were made in June to determine the extent of the scour which has taken place around the structure. This is general and not confined to the immediate vicinity of the light, and amounts to 3 ½ feet since the establishment of the light. The piles were sunk only 6 feet below the surface, so that there now remain but 2 ½ feet between the bottom and the ends of the piles. The structure shakes considerably in high winds. Riprap stone is to be deposited around the structure before the winter sets in.

1896  Northwest Point Royal Shoal, Pamlico Sound, North Carolina. Inspection showed that the riprap stone which had been placed under and around the light-house in 1889 has been either partly washed away or embedded in the shoal, leaving the structure in a weak condition. This is one of the oldest screw-pile light-houses in the district. The shoal upon which it is built has undergone much change since soundings were made in 1868. The six piles have now but 2 feet 6 inches hold in the ground. The superstructure was renewed in 1882. Some of the braces were injured by the ice; the house moves some in storms, and it is not quite safe. As it would cost so much to replace this light-house, it was decided to strengthen the house, so as to prolong its life, if not to rehabilitate it. It is therefore proposed to sink six hollow 13-inch cast-iron piles between the present piles and at a like distance from the center pile. All stone in the way is to be removed. After the piles come to a bearing, they will be filled with concrete. These piles will be surmounted by columns, upon which will rest I-beams connecting them with each other. In addition, two cross beams will be set under the house, securely fastened to two opposite peripheral beams. All will be properly braced, and the superstructure will be blocked up and firmly brought to a bearing. A contract was made in June to do the work. Operations at the site will soon be commenced.

1897  Northwest Point Royal Shoal, Pamlico Sound, North Carolina. The contractors for the repair and strengthening of this structure, in the manner outlined in the last annual report, began work at the site in October, 1896, when they built a storehouse for materials, tools, etc., on a small island in the vicinity. The contract required that the work should be completed by December 27,1896, but as practically nothing had been accomplished by this date an extension of time to June 30, 1897, was granted. Early in June, 1897, the contractors secured a suitable vessel, which left Norfolk for the site on June 13. By the end of the month three of the six supplementary piles were placed in position, the stones on the bottom having been removed for this purpose.

1898  Northwest Point Royal Shoal, Pamlico Sound, North Carolina. The work of strengthening this light-house, referred to in the last annual report, was satisfactorily completed by the contractors on July 20, 1897. A new system of tension braces for the ironwork has been made and soon will be put in place.

1899  Northwest Point Royal Shoal, Pamlico Sound, North Carolina. Some 16 iron bands were placed around the foundation piles and 24 new tension braces were secured in place. New model fourth-order lamps were supplied. Various repairs were made. The site of this light-house, on the edge of a shoal that is wearing away, is unsafe. The house is so low that during the hurricane of August 17,18, and 19,1899, the storm seas dashed over it, doing much damage. The recent efforts made to strengthen this structure were unsuccessful. It oscillates so badly in ordinary weather that it is impracticable to keep the roof from leaking. It is important that a new structure be erected soon at a point farther back on the shoal. This is one of the most important light-house sites in the sounds of North Carolina. It is estimated that the proposed work can be done for not exceeding $30,000, and the Board therefore recommends that an appropriation of this amount be made therefor.

1900  Northwest Point Royal Shoal, Pamlico Sound, North Carolina.The following recommendation, made in the Board's last annual report, is renewed:
The sight of this light-house, on the edge of a shoal that is wearing away, is unsafe. The house is so low that during the hurricane of August 17, 18. and 19, 1899, the storm seas dashed over it, doing much damage. The recent efforts made to strengthen this structure were unsuccessful. It oscillates so badly in ordinary weather that it is impracticable to keep the roof from leaking. It is important that a new structure be erected soon. This is one of the most important lighthouse sites in the sounds of North Carolina. It is estimated that the proposed work can be done for not exceeding $30,000. and the Board therefore recommends that an appropriation of this amount be made therefor.

It was decided, in view of the dangerous condition of the structure, to remove the apparatus and discontinue the lens light, establish an eight-day lantern light instead, and transfer the keeper to the neighboring light-station at Southwest Point Royal Shoal, from which he could attend to the light. In order to increase the efficiency of the light, of which complaint was made, a fifth-order lamp with reservoir to hold eight days' supply of oil was installed in the place of the post lantern, and a fourth-order lens was placed in the light-house lantern. The fog-bell apparatus was removed from the station. On June 1,1900, the light was changed to fixed red by means of ruby chimneys, so as to distinguish it from Southwest Point Royal Shoal light. The light is not satisfactory and is liable to be destroyed at any time.

1901  Northwest Point Royal Shoal, Pamlico Sound, North Carolina.An asbestos hood was supplied for the lamp reservoir in August and minor repairs were made. An appropriation of $30,000 for rebuilding this light-house was made by the act approved March 3, 1901. Plans and specifications for the new structure have been prepared and are being printed.

SIR: This Department has the honor to state, at the instance of the Light-House Board, that an appropriation of $30,000 was made by the act approved March 3, 1901, for rebuilding a light-house upon Northwest Point Royal Shoal, North Carolina, and that it has since been made evident to the Board that this light would be more useful if established in the near vicinity upon Bluff Shoal, which would be a much better site than that at Northwest Point Royal Shoal, as all courses either up or down Pamlico Sound are changed at this point, and as, in the estimation of the local light-house officers, to whom the matter had been referred, it would serve as a guide to clear Northwest Point Royal Shoal much better than if it were established on the northwest point of that shoal.
This Department therefore, has the honor to recommend, at the instance of the Light-House Board, that legislative authority be given to expend the $30,000 appropriated for rebuilding the light upon Bluff Shoal for the reasons stated, instead of building it upon Northwest Point Royal Shoal, as authorized in the act approved on March 3, 1901, as above quoted.

Respectfully, L. J. GAGE,
Secretary.
The SPEAKER OF THE HOUSE OF REPRESENTATIVES.

1904  Northwest Point Royal Shoal, Pamlico Sound, North Carolina.After the lighting of the new station at Bluff Shoal this light was discontinued, and the lens, pedestal, lamps, and chimneys were removed for use at Hatteras Inlet light-station. The structure remains to serve as a daymark.

For a larger map of Northwest Point Royal Shoal Lighthouse, click the lighthouse in the above map.

No evidence of the lighthouse remain at the site today, but a modern light, known as ROYAL SHOAL LIGHT 5RS, is located nearby.