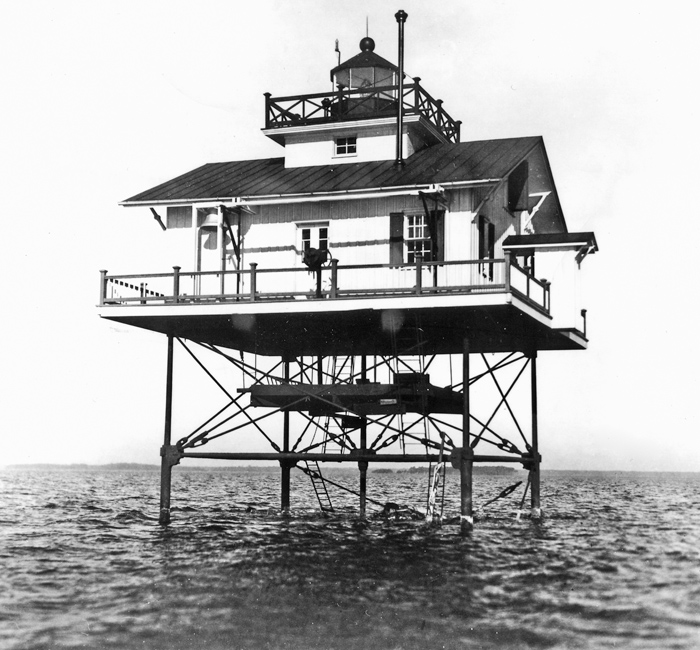 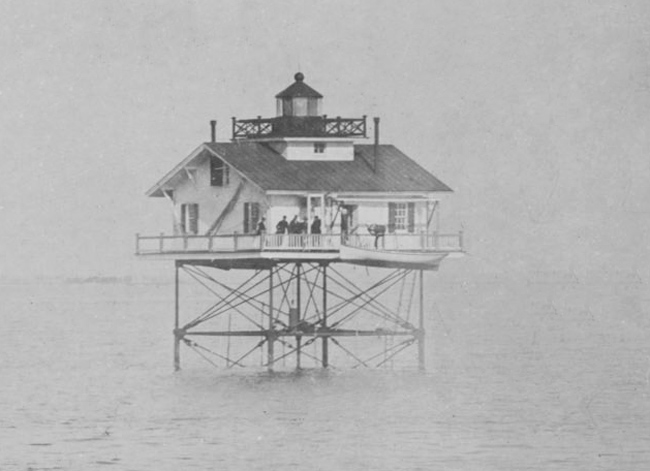 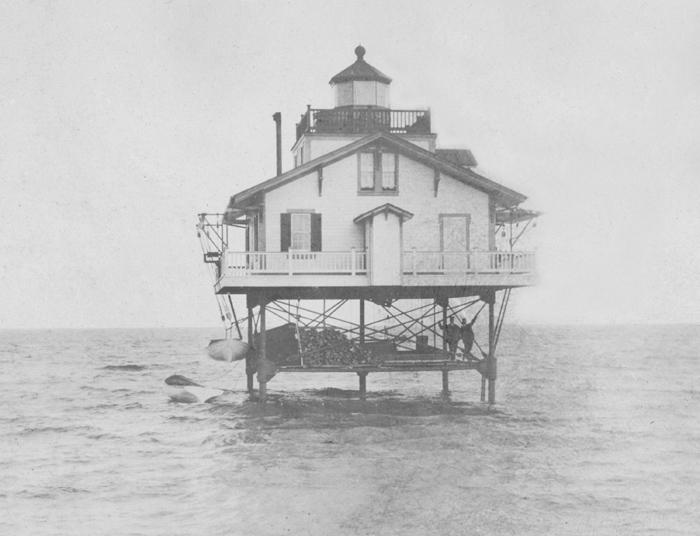 1855  Neuse River  This vessel was removed for repairs to Newbern, North Carolina, on the 18th of May, 1855. She resumed her station on the 30th of June following in perfect order.

1862  The light-house at the mouth of the Neuse river, which was under construction at the time of the breaking out of the rebellion, was necessarily abandoned. The work has been recommenced, and is rapidly approaching completion.

1863  A new light-house has been established at the mouth of Neuse river, showing a fixed light of the 5th order, and a 500-pound bell, to guide mariners during foggy weather, has been provided and put in operation.

1868  Neuse river.Iron-work of foundation painted two coats, outside of dwelling one coat, and lantern inside and out two coats; new glass set where required; new cooking stove and fixtures supplied.

1869  Neuse River.Screw-pile light-house; iron work cleaned of rust by hammering, and afterwards painted; outside and inside lantern painted; also, lantern deck and balustrade; reset defective window glass. The boat has been repaired, and a new sail and material for boat's falls supplied. Funck lamps are to be supplied.

1875  Neuse River, entrance to Neuse River, North Carolina.The roof of this structure, which is a screw-pile light-house, was removed during the past season, a new one put on, and the station left in good order.

1883  Neuse River, entrance to Neuse River, North Carolina.The decayed wood-work was replaced. The diagonal and main beams were renewed or scarfed. New joists, fascias, posts, railing, balusters, and decking were supplied; a new floor was laid in the hall; an iron hand-rail was put on the stairway; new door-sills were put in; the wood-work and lantern were painted, and two boat-hoisters were set up. The station is now in good condition.

1900  Neuse River, entrance to Neuse River, North Carolina.A platform was built under the house for the storage of fuel. Three iron landing ladders were placed, and a trapdoor was fitted in the gallery deck. Two water tanks were set. Various repairs were made.

1920  The act of March 28, 1918, appropriated $150,000 for rebuilding, repairing, and reestablishing aids damaged by storm and ice, from which $100,000 was allotted to the fifth district. The act of November 16,1918, appropriated $300,000 additional for the same purpose, from which $284,000 was allotted the fifth district. The restoration of light stations in the fifth district damaged by ice floes during the winter of 1917-18 was continued during the past fiscal year by depositing riprap at nine light stations, building up existing protective works near or around these stations, or constructing new barriers or ice breakers, and by constructing new foundations and inserting bracing under several screw pile lighthouses, as follows: At Brant Island and Neuse River Light Stations, Pamlico Sound, N. C, 800 tons of riprap stone were placed under the former and 400 tons under the latter to restore the stability of the structures formerly attained by underwater bracing, all of which was carried away by ice. A new foundation of piles and mushroom castings was placed under Brant Island Light Station and the station leveled by the district force previous to the deposit of riprap stone.

1923  Thomas D. Quidley, keeper of Neuse River Light Station, N.C., on July 6 rendered assistance to the fish boat Elizabeth and occupant when that vessel was discovered in a disabled condition in the vicinity of the light station.

For a larger map of Neuse River Lighthouse, click the lighthouse in the above map.