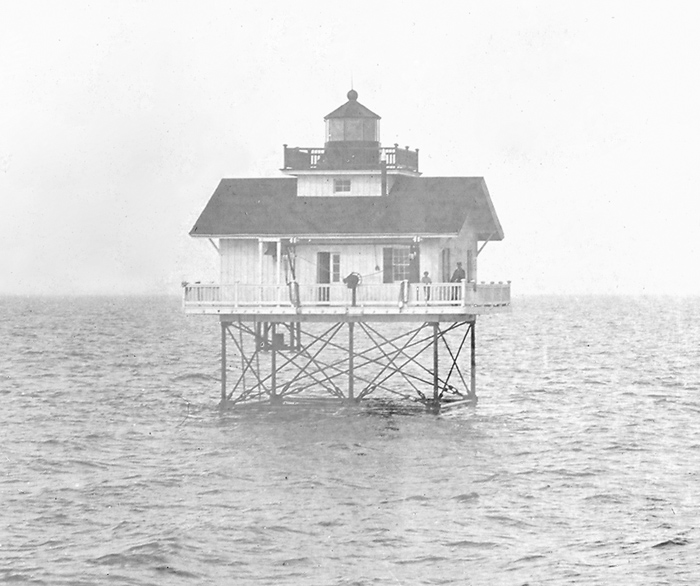 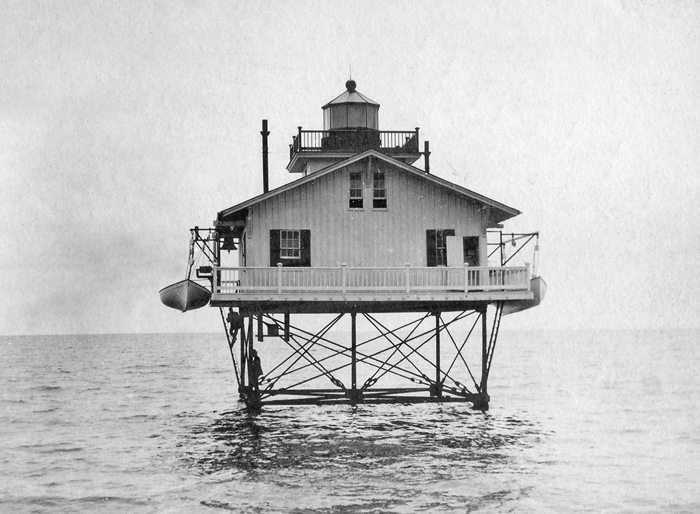 1859  Borings have been made at the stations of the several light-vessels in Virginia and North Carolina, with a view to the substitution of screwpile light-houses for the light-vessels. The changes will be made as rapidly as the appropriations for the support of the light-vessel service will admit.

1860  Parties are now engaged in putting down screw-pile light-houses in lieu of light-vessels at Croatan and Long Point shoals. The work will be completed during the coming winter.

1862  All the light-vessels from Cape Henry southward, including the two in the Potomac River and those in Chesapeake Bay, (except Hoopers Straits and Janes Island,) have been removed and sunk or destroyed by the insurgents. The light-vessel stations in the bounds of North Carolina have been marked by suitable vessels showing temporary lights, viz: Brant Island Shoal, Royal Shoal, Harbor Island, Long Shoal, and Roanoke River.

1866  The Long Shoal light-vessel is in a very defective condition; it is, however, not recommended to remove her for repairs, as she may still keep her station until the screw-pile structure-now in progress to supply her place is completed.

1867  Before the war, the aids to navigation in this district included a great number of light-vessels, many of which were in waters not subject to heavy seas, and but rarely to ice of such mass and strength as to make it dangerous to permanent structures. The rebellion had swept away all the light-vessels in the sounds of North Carolina, and some of those in the lower Chesapeake. In re-establishing these stations the opportunity was presented to carry into effect an object long had in view by the Board, viz., to replace the light-vessels, wherever practicable, by permanent structures, because of their greater economy, both in construction and maintenance. Generally the stations occupied by light-vessels are of such a character that the screw-pile light-house is the most eligible form of construction for any permanent substitute. This is particularly the case in the district in question, owing to the slight elevation of the adjacent shores and their swampy formation, the shallow water and the nature of the bottom. Since the last annual report screw-pile light-houses have been erected upon the eight following stations, formerly occupied by light-vessels, viz: Roanoke river, Harbor island, Southwest Point Royal shoal and Long shoal, in North Carolina, Upper Cedar Point, Hooper's straits, and Janes' island, in Maryland, and Lower Cedar Point, in Virginia, at a total cost of one hundred and twenty-one thousand and one dollars, ($121,001,) which, under the authority of the second section of the act making appropriations for light-houses, light-boats, buoys, &c, and providing for the erection and establishment of the same, and for other purposes, approved March 3d, 1859, has been charged to the appropriation for seamen's wages, repairs, &c, of light-vessels. Thus far, no light-vessel removed or destroyed by the rebels has been replaced by a new one built for the purpose.

1867  Long shoal.A new screw-pile light-house having been completed at this station, a light was exhibited from it for the first time on the night of May 31, 1867. The vessel previously occupying it, being no longer worth repairing, was taken to Newbern, North Carolina, stripped of everything which could again be of service in the light-house establishment, including lantern and accessories, chains, anchors, &c, and on the 9th July, after due notice, sold at public auction for the sum of three hundred and eighty dollars, ($380.) The lantern and accessories were sent to the light-house depot on Staten island, and the remainder of her outfit retained in the district.

1869  Long Shoal.Screw-pile lighthouse; cleaned rust off iron work and repainted it; outside of house, and lantern deck and balustrade painted ; material for new boat's falls supplied.

1883  Long Shoal, east point of Long Shoal, North Carolina.New boathoisters were put up, the fog-bell machine was repaired, and various minor repairs were made. The station is now in good order.

1917 - On November 17 Thomas H. Baum, keeper, and Lloyd V. Gaskill, assistant keeper of Long Shoal Light Station, N.C., rendered assistance to the steamer Velma Brook, which had become disabled in the vicinity of the light station.

1917  On February 4 the Department commended T.H Baum, keeper of Long Shoal Light Station, N.C., for excellent service rendered in maintaining the light and fog signal under hazardous ice conditions. L.V. Gaskill, assistant keeper, has also been commended for efforts made to reach the station in order to assist the keeper.

1920  James B. Cox, keeper, towed the disabled U.S. naval seaplane NC-2 to station and furnished food and lodging to occupants until arrival of the tender Juniper. Happened on August 11, 1920.

1920  T. H. Baum, keeper, cut adrift a string of 15 barges which had become entangled around the light station and threatened considerable damage. Happened on Dec 24, 1920.

1921  About 5 oclock on the morning of December 24, 1920, the keeper of Long Point Shoal Light Station, North Carolina, discovered that a string of 12 or 15 barges had become entangled around the lighthouse, causing violent vibration of the structure. The keeper thought the lighthouse in serious danger, as the sea was running high, with a strong tide. The keeper stated: I knew that something had to be done, and that quick, or the lighthouse would soon be torn free. When I descended I found that the barges were connected with a heavy . Cable. I got an ax and managed to cut the cable, and by hard labor and perseverance for quite a while I got the barges on the weather side freed. It was the worst job I ever tackled in the night, but I believe I saved this house from serious damaged if not wreck, for just after this it blew hard.

For a larger map of Long Shoal Lighthouse, click the lighthouse in the above map.

No evidence of the lighthouse remains at the site today.