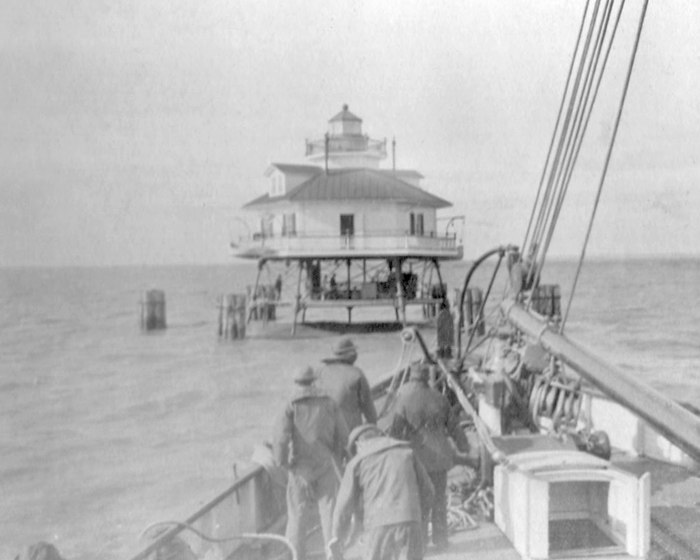 1868  Laurel PointSeveral petitions, numerously signed, asking for the establishment of a light at this point, to facilitate the navigation of Albemarle sound, having been forwarded to the Board by the inspector of the district, with his report as to the necessity for the light, the subject received careful consideration, and the Board is of opinion that a light at or near that point is desirable. An estimate of appropriation required is submitted.

1878  Laurel Point, south side of Albemarle Sound, North Carolina. An appropriation of $25,000 has been made by Congress for a lighthouse at this point. Plans and specifications will be prepared as soon as the examination for the site and borings for the foundation are made.

1879  Laurel Point, south side of Albemarle Sound, North Carolina. After due public advertising, a contract was made for the metal-work of this light-house, in connection with that for Hooper's Straits and for Jane's Island light-houses, Maryland. At the end of June, the construction of the wooden superstructure, at the Lazaretto depot, was completed, and the frame was stored in the depot building. The metalwork will be ready for delivery by the contractors in December, 1879. The erection of the house will immediately follow the delivery of the iron-work.

1880  Laurel Point, south side of Albemarle Sound, North Carolina. The engineer's tender, with a scow and hired schooner in tow, having on board the prepared material and a construction party for the erection of this light-house, left Norfolk (to which point the workmen and material had been transported by a hired schooner from Baltimore) on the 1st and arrived at the site on the 4th of January. Work was commenced on the next day, and on the 6th the platform was in position and the center pile screwed into its place. On the 8th, all the piles were in position and the ties and braces set. On the 10th, the frame of the superstructure was erected and the sheathing commenced. The weather-boarding was completed on the 15th, and by the end of the month the station was finished with the exception of a little painting. The light-house is hexagonal in shape, stands upon seven screw-piles and shows a flashing white light of the fourth order. It was lighted for the first time January 31,1880.

1886  Laurel Point Light-Station.This screw-pile structure stands in 9 feet of water about three-fourths of a mile north of Laurel Point, Albemarle Sound, North Carolina. The keeper reports that he felt an earthquake shock on August 31, at 9.50 p. m. Three light shocks were felt, which lasted about thirty seconds. Again, on September 3, at 9.30 p. m., there were three very light shocks of about thirty seconds duration. Again, on October 22, at 2.45 p. m., three distinct shocks were felt. They were light and lasted about forty-five seconds. The vibrations of the earth seemed to be from east to west.

1893  Laurel Point, Albemarle Sound, North Carolina.The seven cast-iron columns forming the upper series of the substructure were all broken in greater or less degree by the ice during the winter. There was also a slight lateral movement of the superstructure from its position and a settlement of one of the piles. The light-house has, however, held together with remarkable firmness and there is no danger of a collapse before measures can be taken to straighten and strengthen the structure. This will be done before the coming winter.

1894  Laurel Point, Albemarle Sound, North Carolina.A working party was sent on the tender Jessamine in September, with the necessary materials and plant, to repair the injuries done by ice to this light-house. Heavy timbers were laid on the horizontal braces, around corner and center piles, and on these supports jackscrews and blocks were placed. After the removal of the fuel platform from under the house the superstructure was lifted from the foundation and blocked up, the broken columns were removed from the sockets, and the seven new columns were inserted in their places. The house was lowered on to the new columns, all of the tension braces were replaced, and the new work was painted. The fuel platform was restored to its position and the jackscrews and temporary supports were removed. Repairs of a general character were also made.

1896  Laurel Point, Albemarle Sound, North Carolina.This structure suffered severely from moving-ice masses during the winter of 1893-94. Measures had been taken in the fall of 1893 to strengthen the lighthouse by the substitution of new iron columns for the broken ones, but the severe weather of the next winter, which caused an unprecedented formation of ice in this locality, left the structure in a worse plight than before. During an inspection made in October, 1895, it was found that five of the new columns were cracked below the flanges and above the lower main sockets. The house had been pushed over, and it was somewhat out of level. In the construction of this light-house the iron piles and columns upon which the superstructure rests were designed to stand in an inclined position instead of vertically, as in most types of the screw-pile light-house, and consequently any attempt to level the house and straighten the ironwork was likely to result in a collapse of the structure. Hence, clusters of heavy wooden piles were driven in front of and a short distance from each of the iron foundation piles, to act as fenders against ice fields in action. These groups were composed of about fifteen piles each, securely fastened together at the top by iron chains.

1899  Laurel Point, Albemarle Sound, North Carolina.New model fourth-order lamps were supplied, the fog-signal apparatus was overhauled, the interval of striking adjusted, and the force of the blow increased. Various repairs were made.

1926  B. F. Cox, keeper of Laurel Point Light Station, N. C., and William A. Bateman, assistant keeper, on the night of February 19 rendered assistance to two men in a small boat adrift near the station and gave aid to one of the men who had mangled this foot in the machinery of the boat, and on a later date also rendered assistance to a man in gas boat adrift near the station.

For a larger map of Laurel Point Lighthouse, click the lighthouse in the above map.