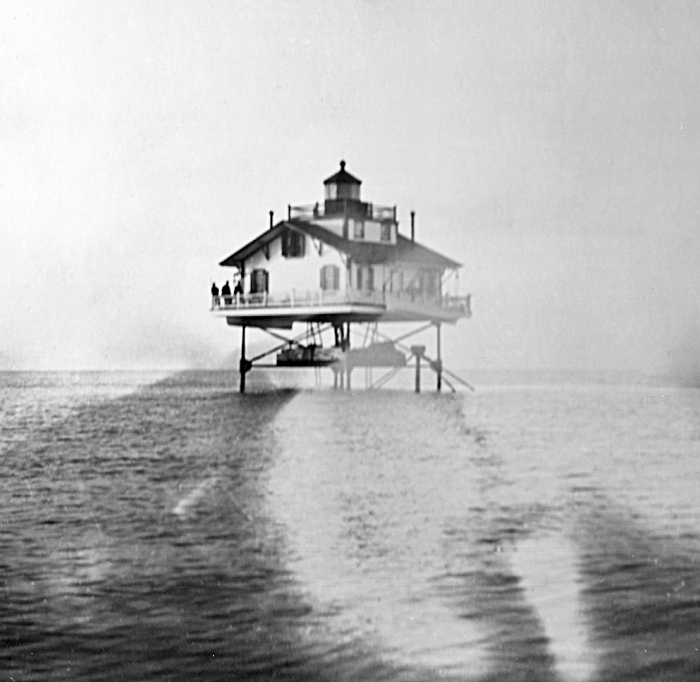 1862  All of the light vessels from Cape Henry southward, including the two in the Potomac river and those in Chesapeake bay, (except Hooper's straits and Jane's island,) have been removed and sunk or destroyed by the insurgents. The light-vessel stations in the bounds of North Carolina have been marked by suitable vessels showing temporary lights, viz: Brant Island Shoal, Royal Shoal, Harbor Island, Long Shoal, and Roanoke River.

1867  Harbor island.This station was re-established by the erection of a screwpile light-house, from which a light was exhibited for the first time on the night of April 1, 1867. The vessel formerly occupying it was destroyed by the rebels at the beginning of the war.

1868  Harbor island.Iron-work of foundation painted two coats, dwelling one coat, and lantern inside and out two coats.

1869  Harbor Island.Screw-pile light-house; entire outside and inside of house and lantern painted.

1879  Harbor Island, between Pamlico and Core Sounds, North Carolina.An examination of this light-house made in November revealed the fact that the action of the current on the shoal had deepened the water about the house, until the wooden piles supporting the house were exposed below the iron sleeves, to a distance of 5 feet, thus laying bare from 6 to 12 inches of the wooden piles to the ravages of the worm. Prompt measures were necessary to preserve the station, and, accordingly, the plan was adopted of placing a block of rich concrete, 6 feet by 6 feet by 5 feet around the base of each iron sleeve and the exposed portion of the pile. The iron sleeves and exposed wood of the piles were cleaned by a diver, who prepared the bottom to receive the wooden boxes. They were held in place by wedging them to the iron-work of the light-house and filling them with concrete. Where the bottom required it, gunny-bags partly filled with concrete were placed on the bottom, inside the boxes. Gunny-bags of sand were then placed on the top of the new concrete, to prevent it from being washed by high seas before the cement had thoroughly set.

1885  Harbor Island, on Harbor Island Bar, between Pamplico and Core Sounds, North Carolina.The old light-house at this station is in such a dilapidated and insecure condition that its relighting, as contemplated, has been found to be impracticable. The necessity for the light is, however, so great that the Board asks for an appropriation of $20,000 for its re-establishment.

1887  Harbor Island Bar, between Pamplico and Core Sounds, North Carolina.An appropriation of $20,000, approved August 4,1886, was made for re-establishing the light at Harbor Island Bar. Borings were made in May, to determine the character of the shoal in the vicinity of the present structure and the results obtained were such as to justify the recommendation that a screw-pile structure be built on the plan of the light-house now being constructed at Croatan, N. C. This can be built alongside the present house, which it is impracticable to remove or re-establish as a light-station, and will serve to mark a dangerous obstruction, as well as to fulfill the purposes for which the present structure was erected.

1888  Harbor Island, between Pamplico and Core Sounds, North Carolina.Plans and specifications having been prepared, proposals were invited in August for furnishing the metal work required for the new light-house, and contract therefor was made in September with the lowest bidder for $5,000. The framing of the wooden superstructure was commenced at the same time at the Lazaretto depot, and it was completed in April. The working party left Baltimore for the site on the tender Jessamine April 23. The tender had in tow the launch Nettle and two scows loaded with the necessary materials. After some delay in passing through the Albemarle and Chesapeake Canal and stopping at Long Point light-station for a part of the working plant, they arrived at the site on the night of April 30. The work of erecting the light-house was commenced the next day and it was completed in one month except as to the painting, but a painter and a laborer were left there to finish the work. During this time the old light-house structure was torn down, the upper series of tension rods were disconnected, and all the iron sleeve piles except the center one were broken off below the surface of the water. This one was left with some of the tension braces attached, to indicate the position of the old house. The light from the new structure was first shown on the night of June 10, 1888, and has since been continuously exhibited. It is of the fifth order and gives a red flash every ten seconds. The light house consists of an iron screw-pile foundation painted brown, surmounted by a square frame dwelling painted white with brown roof, green shutters, and black lantern. It is provided with a fog-bell, which is sounded during thick or foggy weather every ten seconds.

1904  Harbor Island Bar, Pamlico Sound, North Carolina.On February 14, 1904, the characteristic and order of this light were changed from flashing red of the fifth order to fixed red of the sixth order. The lens apparatus was removed and replaced by one in store. Minor repairs were made.

Formerly located in 6 feet of water on Harbor Island Bar in the southern part of Pamlico Sound and on the eastern side of the channel leading from Pamilco Sound into Core Sound.
Latitude: 35.007425, Longitude: -76.221168

For a larger map of Harbor Island Bar Lighthouse, click the lighthouse in the above map.