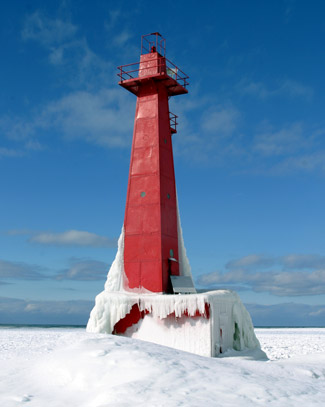 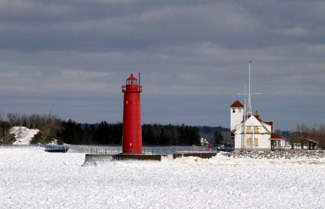 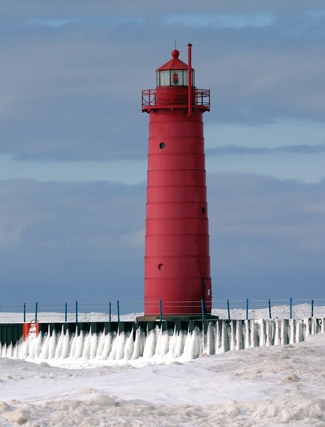 The name Muskegon comes from the Ottawa Indian term Masquigon, meaning marshy river or swamp, and refers to the Muskegon River that expands into Muskegon Lake before emptying into Lake Michigan. Settlement on the shores of Lake Muskegon began in 1837 with the establishment of Muskegon Township. Nicknamed the Lumber Queen of the World, Muskegon was home to more millionaires than any other town in America during the late 1800s, when its lumber helped rebuild Chicago after the great fire of 1871. In August 1838, Lieutenant James T. Homans visited the river and included the following in a report to the Secretary of the Treasury:

Muskegon river, on lake Michigan, came next under my observation, it is a large stream, opening, within half a mile of its outlet, into a considerable lake, eight miles long by four wide. The channel in, is wide and easy of access, and not less than twelve feet of water in it; making this harbor, in my estimation, the best on lake Michigan, all things considered. Its value as a safe haven, and the rich lumber trade in which it will soon be engaged, (three extensive steam saw-mills having been erected there,) entitle it to a light-house near the entrance. I selected a point, on the south side of the rivers mouth, as the best location, in the event of an appropriation being made for a light there.

On March 3, 1849, Congress set aside $3,500 for a lighthouse at the site selected by Homans, and in 1851 a one-and-a-half-story, rubblestone dwelling, surmounted by a wooden tower, was built. The dwelling measured thirty-six by eighteen feet, and the top of the tower stood twenty-six feet above the ground. Six lamps with fourteen-inch reflectors were originally used in the lantern room, but a sixth-order Fresnel lens replaced these in 1856. Alexander Wilson was hired as the lights first keeper at an annual salary of $450.

Congress allocated $8,000 on March 2, 1867 to rebuild Muskegon Lighthouse, which by this time was old, and no longer worth repairing. The light was exhibited from a temporary structure, while the old lighthouse was torn down and timber was framed for the new one. At this point, it was observed that a wooden lighthouse would be in great danger of fire from piles of combustibles (lumber, slabs, sawdust and shavings) which surrounded it, and the decision was made to acquire land on the north side of the river. When gaining title proved difficult because one of the owners of the desired parcel was out of the country, the Lighthouse Board decided to keep the light on the south side of the river.

A wooden dwelling topped by a square tower was completed in 1871 and equipped with a fourth-order lens. The following year, a wooden pierhead tower was built at the outer end of the south pier, with an elevated walk connecting it to shore. This tower exhibited a fixed red light at a focal plane of thirty-six feet, using a sixth-order lens, and was equipped with a fog bell.

By 1891, a post light had been placed on the end of the south pier to form a range with the wooden tower, for in that year, the following modification was noted: A post for supporting the wire for operating the light shown from the post at the outer end of the south pier was placed midway between the beacon and the outer end of the pier, and an additional wire for operating the light was provided. Two iron brackets for supporting the operating wires were placed on the light and intermediate posts. In 1894, a 580-foot-long conduit used for running a lantern to and from the front light was built, and this new light was displayed on July 25.

The present circular, metal tower was erected near the inner end of the south pier in 1903, and the fourth-order lens from the land-based lighthouse at Muskegon was removed and placed in the new tower. This new light was established on September 27, 1903, and the sixth-order light, shown from the wooden tower on the pier, was discontinued and the structure removed. No longer needed, the tower atop the land-based lighthouse was taken down. In 1917, the structures supporting the pierhead range lights were painted red.

Early on the morning of October 28, 1919, the wooden side-wheel steamer City of Muskegon struck the south pier while trying to make the harbor in a powerful storm, and in less than fifteen minutes it had practically gone to pieces. First Assistant Keeper Ransom Jakubovsky, who was on duty in the fog signal building, sounded distress signals with the fog signal and then rushed to the wreck. With the aid of a flashlight, Jakubovsky helped the passengers and crew alight on the pier and then directed them to the safety of the fog signal building. I had my flashlight in my pocket and by using that many of the passengers were able to get off, recalled Jakubovsky. It was so dark we couldnt see and my flashlight was the only aid these people had. I threw my light so people could jump, but I could not throw it everywhere.

During the rescue effort, Jakubovsky was knocked over a number of times by breakers. At daylight, the survivors walked to shore where they were cared for by Keeper Thomas Robinson and residents in the vicinity. The Lighthouse Bureau commended Keeper Robinson and Jakubovsky for assisting in the rescue and helping recover the dead. Fifteen of the thirty-seven passengers perished along with seven of the crew.

On March 3, 1925, a project was adopted for creating an arrowhead harbor entrance, consisting of converging exterior breakwaters, and for removing the greater part of the existing parallel piers. A seventy-foot steel tower, housing an air oscillator fog signal, was installed at the outer end of the south breakwater in 1930. Electricity for this new light, which was operated by remote control, came from a new powerhouse built on shore. About 1,000 feet of the outer ends of the parallel piers was removed, and the circular red tower was placed at the end of the shortened south pier. The light on the south breakwater and the pierhead light on the south pier formed a range to help mariners approach the harbor at Muskegon with the proper bearing. A flashing acetylene light was established atop a skeletal tower on the north breakwater in 1932, and a radiobeacon was added to the station the following year.

The old land-based lighthouse was moved in 1929 and placed atop a new foundation, and two additional dwellings were built to house the keepers. The former lighthouse was torn down in the early 1970s to make way for a new Coast Guard station.

In June 2008, the Muskegon South Pierhead and South Breakwater Lighthouses, deemed excess by the Coast Guard, were offered at no cost to eligible entities, including federal, state and local agencies, non-profit corporations, educational agencies, or community development organizations. On June 17, 2010, Michigan Lighthouse Conservancy, a statewide historical preservation group, was announced as the new owner of the fifty-five-foot-tall South Pierhead Light and the South Breakwater Light.

Located on the south side of the entrance to the channel leading to Lake Muskegon from Lake Michigan.
Latitude: 43.22412, Longitude: -86.34711

For a larger map of Muskegon South Pierhead Lighthouse, click the lighthouse in the above map.

From Highway 31, take the Highway 31 Business Route into Muskegon. Turn west onto Sherman Boulevard and follow it for approximately thee miles to Beach Street. Turn right onto Beach Street and follow it to Pere Marquette Park where you can park and view Muskegon Lighthouse. The Coast Guard and NOAA both maintain active facilities at the shoreward end of the south pier, but the NOAA station leaves their gate open and has a painted path labeled "Visitors Walkway" that leads from the public sidewalk, around the NOAA station, and to the pier. The public can freely walk the south breakwater.