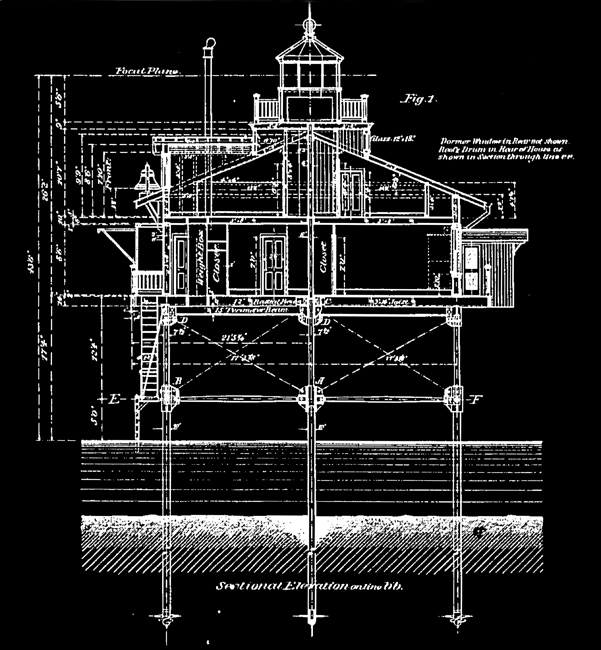 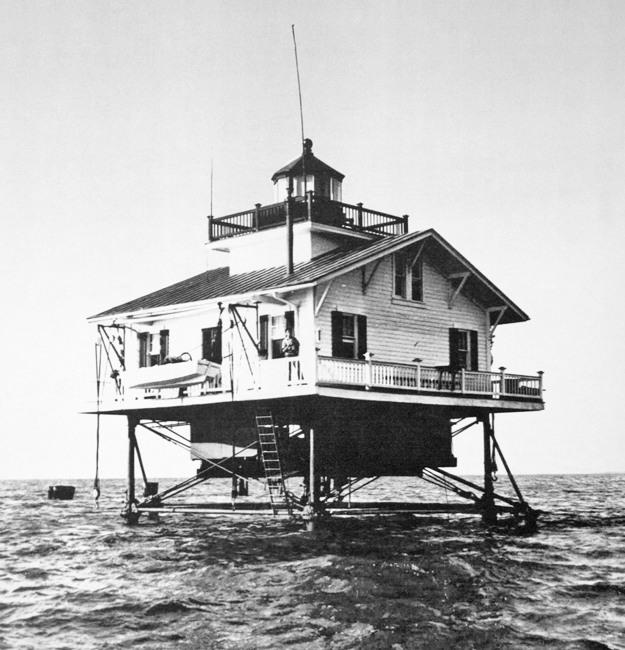 1888  Gull Shoal, on the west side of Pamplico Sound, North Carolina.A light and fog-signal on Gull Shoal would be of great benefit to the general navigation of Pamplico Sound. This shoal projects far into the Sound and is on the track of vessels running between Long Shoal and Northwest Point Royal Shoal lights. A light placed upon it would enable vessels to shape their course to either point.
After leaving the Long Shoal light no guide at night or in thick weather is found until the Northwest Point Royal Shoal, North Carolina, light is reached, the distance being 35 miles, and even if the shore can be seen there is nothing to indicate the locality, the shore line being marsh with distant woods.
A large number of vessels, and among them the largest steamers navigating the sounds of North Carolina, have struck on Gull Shoal, some of them having been lost, and on the afternoon of November 28, 1887, the U. S. Coast and Geodetic Survey schooner Scoresby struck there, notwithstanding that she was navigated with great care and skill, and had on board every appliance necessary to her safety. If a vessel thus equipped is in danger of striking on this shoal, the danger to vessels less well equipped must be far greater, and such has proved to be the case.
It is estimated that the light can be constructed for $30,000, and it is recommended that an appropriation of that amount be made.
A bill authorizing the establishment of this light was passed at the current session of Congress, but no appropriation was made for its construction. The Board therefore calls attention to this case with renewed urgency.

1889  Gull Shoal, on the west side of Pamplico Sound, North Carolina.An appropriation of $30,000 was made by Congress March 2, 1889, for establishing a light and fog signal at this place. The borings made at the site in June indicated a good foundation of sand and shells to a depth of 20 feet. Plans for the new structure were prepared.

1890  Gull Shoal, on the west side of Pamplico Sound, North Carolina. Proposals for furnishing the metal-work of this and a like structure to be erected at Pamplico Point Shoal, North Carolina, were opened September 18, 1889. The lowest bid received was $14,200 for the two houses, the work to be completed within five months. The framing of the superstructure was commenced at the Lazaretto depot in December and finished in April. This was not pushed as there was no prospect of the early completion of the metal-work. The latter was not delivered until May 27, about seventy days after the stipulated time. The erection of the house upon the site will be commenced at an early date.

1891  Gull Shoal, on the west side of Pamlico Sound, North Carolina. Operations at the site were commenced on September 2, 1890. The working platform was placed in position with the necessary material and machinery, and the setting of the foundation piles was begun. Though at first penetration was difficult, it was found that at the depth of 10 feet but little resistance to the revolution of the screw was encountered. This was unexpected, as the preliminary borings made in the vicinity indicated a firm foundation. Upon sounding with a rod the soft layer appeared to extend deeper than the piles had been intended to penetrate. It was therefore evident that without some additional means of support it would not be prudent to place the light house upon such a foundation. It was decided to surround each pile with a cast iron sleeve 1 ¾ inches thick and 11 feet long provided with a disk of the same material 5 feet in diameter, in order to give as large a bearing surface upon the hard upper stratum of the shoal as practicable. This plan had been tested and, while economical, proved entirely effective in a similar case elsewhere in the district. Accordingly, after all the piles had been placed in position and screwed to a depth of 13 feet, the work was suspended until the sleeves could be made. The tenders and working party returned to Baltimore to engage in other operations, and the platform and materials were left in charge of watchmen. The sleeves were finished in October, but it was not until December 4 that everything was in readiness to return to the site. Work was re-commenced on December 13. The disks were bolted to the sleeves and the latter, after proper adjustment, were fastened securely to the piles by set screws. The work was then prosecuted rapidly and was practically completed, and on February 1, 1891, the station was ready for the exhibition of the light. The light-house is a wooden dwelling, hexagonal in plan, resting on seven wrought-iron piles 10 inches in diameter, and surmounted by a lantern showing a fixed red light of the fourth order. During thick and foggy weather a bell is struck by machinery a double blow every fifteen seconds.

1900  Gull Shoal, Pamlico Sound, North Carolina.The fuel platform was removed because its position endangered the safety of the light-house during very high tides. Various repairs were made.

1926  By the installation of acetylene in lieu of oil lights at Hatteras Inlet and Gull Shoal Light Stations, four positions of keeper have been discontinued and three positions of lamplighter. These two lights and six minor acetylene lights and three minor oil lights have been given in charge of the three keepers of Bluff Shoal Light Station where an additional keeper has been allowed in connection with the formation of this group.

For a larger map of Gull Shoal Lighthouse, click the lighthouse in the above map.