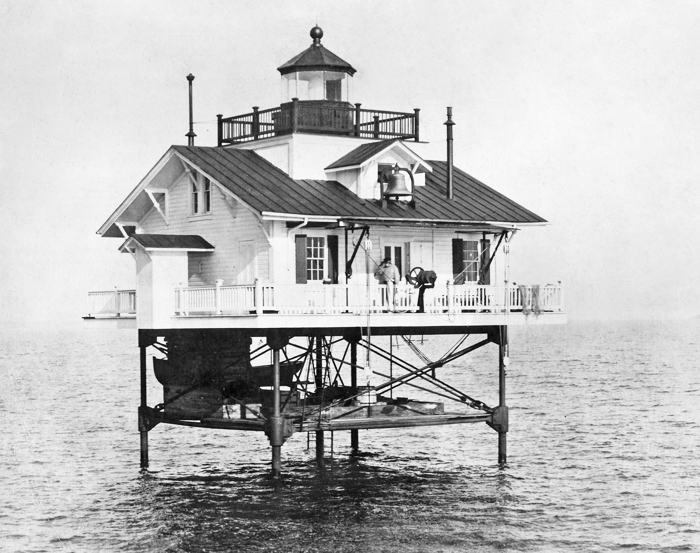 1860  Parties are now engaged in putting down screw-pile light-houses in lieu of light-vessels at Croatan and Long Point shoals. The work will be completed during the coming winter.

1863  The light-houses at Roanoke marshes, northwest point of Royal Shoal, Croatan, Cape Lookout, and Ocracoke have been refitted and the lights re-exhibited.

1866  Re-establishment of Lighthouse at Croatan,  North Carolina. The lighthouse at Croatan, between Croatan and Albemarle Sounds, has been restored, and will be lighted up for the first time on the 1st December, 1866. It is 35 feet high, and visible at the distance of 10 miles.

1867  The light-houses at Wade's Point and Croatan, the superstructures of which were burnt by our own troops, and that at Pamplico Point, which had been extinguished by the rebels, have been restored and are now lighted.

1868  Croatan.Iron-work of foundation painted two coats; also outside of dwelling, and lantern inside and out; new glass set where required; a new cooking stove and fixturesalso materials for boat fallssupplied.

1882  Croatan, between Croatan and Albemarle Sounds, North Carolina.A new fog-bell was put up at this station in place of a defective one. The roof was repaired.

1883  Croatan, between Croatan and Albemarle Sounds, North Carolina. New floors were laid in the kitchen and hall, and new sills in the front and rear door-ways; 400 feet of new decking were laid; a new stand was made for the water-tank; a broken tension-brace was repaired; bolts, washers, and clamps for securing the girders and sills were made, and the lantern-deck was retinned. The station is now in good condition.

1885  Croatan, between Croatan and Albemarle Sounds, Pamplico Sound, North Carolina.An appropriation was made on July 7, 1884, "for removing the Croatan light-house to a point where it will be of more value to navigators." The light-house consists of an old and decayed wooden dwelling upon a screw-pile foundation. The dwelling cannot be taken down and rebuilt, and to move it bodily would cost, including the appliances which must be purchased, several times as much as will be required for a new and much better dwelling. The foundation, if moved, must first be taken up and brought to some place where the iron work can be reforged, the corrosion being so great that it cannot be taken apart and removed without much cutting and breaking of parts. The cost of moving the light-house being vastly more expensive and less effective than to construct a new one, the latter method was proposed. Plans and specifications were prepared and material purchased for the foundation and superstructure. The latter was constructed at the Lazaretto depot, Baltimore, and the metal-work was delivered, when further operations were suspended, owing to a decision by the Commissioner of Customs that the money appropriated under the foregoing clause could not be applied to the construction of a new light-house. Work has therefore been suspended pending further Congressional action.

1887  Croatan, between Croatan and Albemarle Sounds, North Carolina.By act approved July 10,1886, Congress made the appropriation "for removing Croatan light-house to a point where it will be of more value to navigators" available for the erection of a new light-house at the proposed point. The necessary materials for the superstructure, and the lantern and water-tanks, were purchased under contract in March, and the framing of the house was commenced at the Lazaretto depot. New oak levers were made for screwing down the piles. The iron superstructure was already on hand, having been purchased in 1885. The wood-work was completed in May and prepared for shipment. The material of the working platform and the iron foundation were taken by the tender Jessamine to Long Point Station, N. C., early in June, and landed there until the completion of the necessary repairs at North River light-station, in the latter part of the month. Operations were commenced at the site on the 21st. The positions of the piles were indicated, the platform was placed in position, the ironwork was transferred to it from the scows, and the screwing down of the piles commenced. All the piles were in place on the last day of the month.

1888  Croatan, between, Croatan and Albemarle Sounds, North Carolina.At the date of the last annual report all the iron screw-piles had been set. The erection of the iron-work and the frame superstructure were carried forward rapidly and on July 30, 1887, the light-house was entirely completed. In the mean time the lens had been transferred from the old structure so that the light could be shown from the new light-house on July 15, 1887, the date announced in the notice to mariners of the change. After the removal of the lens the old house was torn down. The present light-house is a square frame structure painted white, standing upon five iron screw-piles securely braced. The iron foundation is painted brown. A fog bell placed on the west side of the house is, during thick or foggy weather, struck at intervals of fifteen seconds.

1891 - 47.5. Croatan, between Croatan and Albemarle Sounds, North Carolina. In June arrangements were made for the introduction of a red sector into this light to mark, in conjunction with another in the Roanoke Marshes light, the Fulker Island obstructions in Croatan Sound. This improvement will take effect July 30,1891.

1899  Croatan, between Croatan and Albemarle sounds, North Carolina.New model fourth-order lamps were installed and a new landing ladder was put up to replace one carried away by the ice.

1916  On May 20, 1916, one of two barges in tow of the tug Sarah was in collision with Croatan Light Station, N. O, smashing the station boat. Efforts are being made to have the owners of the tug assume the cost of the damage, estimated at $150.

1917  On January 6, 1917, Croatan Light Station, N. C, was collided with by the tug Curtin with four barges in tow, causing damage to the light station in the estimated amount of $120, which the owner of the tug has agreed to pay for.

1919  C.C. Midgett, assistant keeper, rendered assistance to disabled motor boat with one occupant aboard. Happened on May 10, 1919.

For a larger map of Croatan Lighthouse, click the lighthouse in the above map.