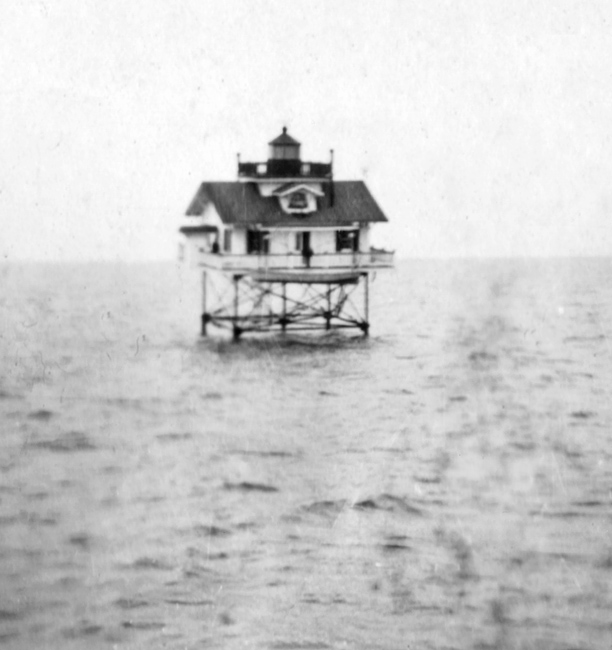 1855  Brant Island shoal  This vessel is now undergoing repairs at her station.

1862  The light-vessel which formerly marked Brant Island shoal, and which was recaptured on the taking, by the United States forces, of Forts Hatteras and Clark, at Hatteras inlet, was subsequently sunk by accident at that inlet. She has, however, been raised, and is now undergoing repairs to fit her for service as a light-vessel.

1863  The light-vessel stations at Long shoal and Brant Island shoal have been marked by suitable vessels and apparatus, and are now in effective operation. The vessel marking the latter station being old and defective, measures are in progress for the erection at that site of a screw-pile structure, and it is confidently expected that in the course of the coming winter the new light will be completed.

1864  At the date of the last annual report, a temporary light-vessel marked Brant Island shoal. Since then a screw-pile light-house has been erected on the point of the shoal, and lighted, and the vessel removed to Newbern, where in March last she was sunk by order of the military authorities, as an obstruction to rebel naval movements in Neuse or Trent river.

1868  Brant island.Iron-work of foundation painted two coats, outside of dwelling one coat, and lantern painted inside and out two coats; locks and hinges to doors repaired and new glass set where required; new cooking stove and fixtures supplied.

1869  Brant Island.Screw-pile light-house; iron work cleaned of rust, and painted; house painted outside, and lantern painted outside and in. Funck lamps are to be supplied.

1876  Brant Island Shoal, southern part of Pamlico Sound, North Carolina.This station was destroyed by fire, May 24, 1876, but the ironwork remaining intact, with a few minor exceptions, the station can be restored at an expense not to exceed $10,000, for which an appropriation is needed.

1877  Brant Island Shoal, southern part of Pamlico Sound, North Carolina.This light-house was destroyed by tire on May 24,1876. The iron foundation was not, however, injured. As the light is quite an important one, it is deemed advisable to rebuild it, and defray the expenses from the general appropriation applicable to such work. The frame has been prepared and will be shipped to the station in a short time.

1878  Brant Island Shoal, southern part of Pamlico Sound, North Carolina.The rebuilding of this light-house upon the iron foundation, which was not materially damaged by the fire which destroyed the light-house, was commenced on the 27th of October, and completed the following month. The light was exhibited on the 1st of December. The characteristics of the light remain as formerly.

1883  Brant Island Shoal, southern part of Pamplico Sound, North Carolina.A new boat-hoister was put up, the fog-bell-striking machine was repaired, and various minor repairs were made. The house is now in good order.

1885  Brant Island Shoal, Pamplico Sound, North Carolina.A boathoister has been set up and a new weight-cord supplied for the fog-bell machine.

1920  The act of March 28, 1918, appropriated $150,000 for rebuilding, repairing, and reestablishing aids damaged by storm and ice, from which $100,000 was allotted to the fifth district. The act of November 16,1918, appropriated $300,000 additional for the same purpose, from which $284,000 was allotted the fifth district. The restoration of light stations in the fifth district damaged by ice floes during the winter of 1917-18 was continued during the past fiscal year by depositing riprap at nine light stations, building up existing protective works near or around these stations, or constructing new barriers or ice breakers, and by constructing new foundations and inserting bracing under several screw pile lighthouses, as follows: At Brant Island and Neuse River Light Stations, Pamlico Sound, N. C, 800 tons of riprap stone were placed under the former and 400 tons under the latter to restore the stability of the structures formerly attained by underwater bracing, all of which was carried away by ice. A new foundation of piles and mushroom castings was placed under Brant Island Light Station and the station leveled by the district force previous to the deposit of riprap stone.

Formerly located in 7 feet of water on the eastern end of the shoal making off from Brant Island in the southwest part of Pamlico Sound
Latitude: 35.135968, Longitude: -76.293001

For a larger map of Brant Island Lighthouse, click the lighthouse in the above map.