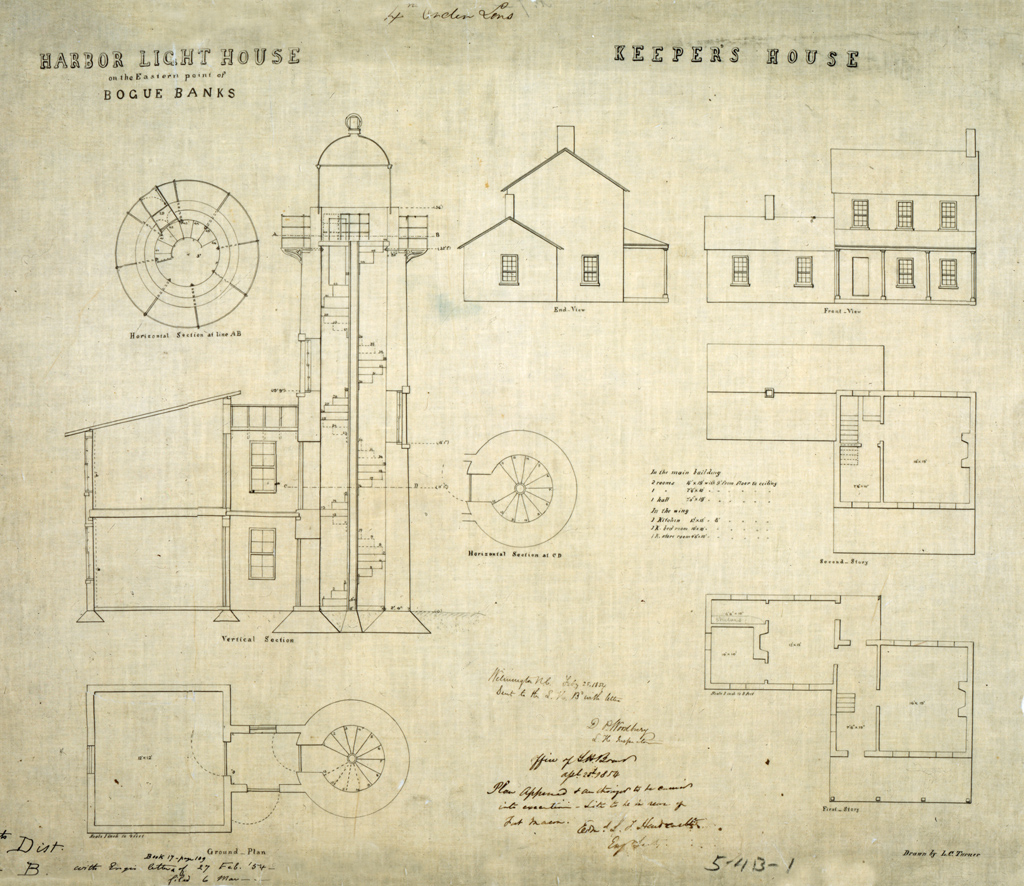 1853  In the sixth district, embracing the coasts of part of North Carolina, South Carolina, Georgia, and part of FloridaCaptain D. P. Woodbury, United States corps of engineers, inspectorin addition to the ordinary routine duty of inspection, repairs to light-house towers, buildings, light vessels, and illuminating apparatus, raising, cleaning, painting, numbering and replacing buoys, the following special works have been placed under the charge of the inspector: The light-house on the upper jettee, Cape Fear river; light-house on Bogue banks; three beacon-lights at Georgetown, S. C.; beacon on Morris island, Charleston harbor, and a new light house off Cape Romain. Plans for all of these works are in progress; and as soon as the necessary preliminary steps in regard to the selection of sites, obtaining deeds and cessions of jurisdiction, are completed, the works will be commenced and prosecuted vigorously.

1855  Bogue Bank and Fort Macon.These two lights near Fort Macon, entrance to Beaufort harbor, were erected under the superintendence of Captain D. P. Woodbury, corps of engineers, since the date of my last report, and the lights first exhibited on the 20th day of May 1855.

1855  A harbor light-house and a beacon light on the eastern point of Bogue Banks were erected during the past winter and spring and lighted, in accordance with a printed notice on the 20th of May last.
The harbor light consists of a fourth order lens, fifty feet above the sea, surmounting a tower made of excellent bricks. The beacon is lighted by a small lens, thirty feet above the sea, supported by a wooden frame.
The beacon is about one-fourth of a mile from the harbor light. The two range with the outer buoy on the main bar and afford easy access to the harbor by night.

1864  The absence of any special pressing necessity for re-establishing at this time the lights at Body's island, Pamplico Point, and Bogue Banks has induced the board to abstain from any action in the premises.

1867  Bogue banks.This station, destroyed by the rebels, and not yet re-established, formerly consisted of a small brick tower, showing a fourth order light, and, together with a beacon of the sixth order, formed a range to enter the harbor of Beaufort, North Carolina. An estimate of the cost of its re-establishment is submitted.

1868  Bogue Bank light-house and beacon. These lights were entirely destroyed by the rebels, and have not yet been re-established.

1869  Bogue Banks.These light-houses were entirely destroyed by the rebels, and have not been re-established; an estimate of the cost of rebuilding them was last year submitted to Congress, but the item was stricken out of the estimates, from which it is inferred that it is not desired to re-establish them; they will consequently be dropped from the list of lights.

For a larger map of Bogue Banks Lighthouse, click the lighthouse in the above map.

No lights exists at this location today, but there is a pair of range lights in the water just northeast of Fort Macon.