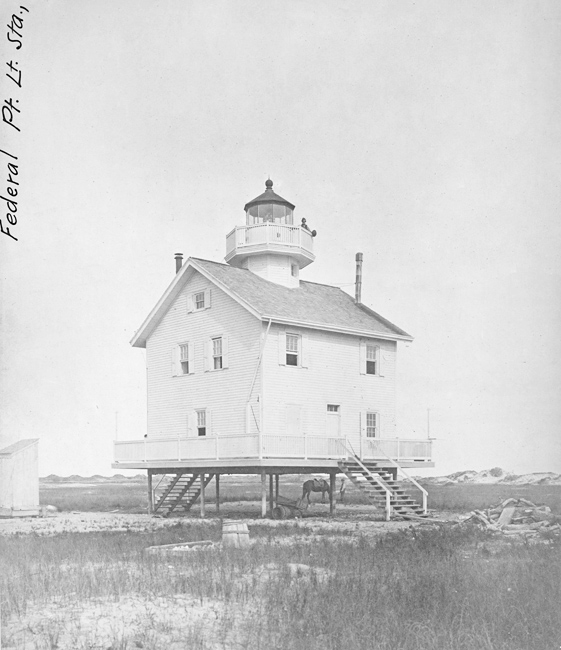 1837  For rebuilding the light-house at Federal point, a contract was some time since made, by which the work was to have been completed by the 15th October, ultimo.

1850  Federal Point light-house - 11 lamps; James Newton, keeper; supplied May 28, 1850.
Tower has recently been whitewashed. The lantern deck, which is built of soap-stone, is leaky through the joints, and a mason has been working upon it, stopping and filling up the seams with brimstone, but it is still leaky; lighting apparatus is in fair order; oil butts are good. A new keeper has now charge of this establishment. Dwelling is out of order; kitchen chimney was blown down last August, and has not been rebuilt; and besides, the kitchen is very leaky.
Left June 1, 1849 411 gallons of oil. Found on hand 200. 211 gallons consumed in 361 days is equal to 213 gallons per year, or 19 4/11 gallons per lamp.
Delivered 102 gallons spring oil, 101 gallons winter oil, on hand 200 gallons, for a total of 402.
60 tube glasses; 28 yards cloth; 4 gross wicks; 1 buff skins; 1 pair scissors; 1 box soap; 1 glaziers diamond; 1 wick-box; 1 hand lantern; 1 Japan lamp; 1 file; 1 lamp-feeder; 2 burners complete.
2 spare lamps, in good order,; common burners; 13 and 14-inch reflectors.
1851  NEW INLETFEDERAL POINT LIGHT.
September 4, 1851.

James Newton, keeper: appointed October, 1849; was a pilot. Eleven spherical reflectors, 12 ½ inches diameter; burners 2 ½ to 3 inches from centre to parameter of reflector; very bad order throughout; common tin lamps; leak badly; reflectors bad; plating worn off; spotted all over from water through leaks and from trimming lamps: not cleaned to-day; glass in lantern 8 by 11; everything inside of lantern black with soot, and rusty; lanterns too small to allow keeper to get around the apparatus; everything very dirty; oil spilled from the lantern to the floor: ventilators bad, and not properly used. Lights at sunset and puts out at sunrise. Has plenty of glass, but no putty. Oil bad; could not give the quantity consumed last year. Has difficulty in getting tube-glasses when they are out; obliged to use broken tube-glasses. Whitewashed about five years ago; no lime allowed. No journal kept, has only one box of soap; very small. Keeper returned an hour after the light-house was reached; light evidently very badly kept. Keeper has had no instructions. Tower too low. Frame movable, and only nine lamps lighted in good weather; lamps and reflectors not properly placed at night, to show to the best advantage to the most desirable parts of the horizon.

This light, seen at the anchorage at Smithville, a distance of about seven miles, is very dim on a clear night with the wind from the N. W. The same objection exists in this case to a movable frame as usual, as it leaves the keeper to place it properly or not, as he pleases; according as he is informed upon the subject or not. The light from this tower, as seen on clear nights from the anchorage at Smithville appears like two lights, one above the other; which results from the reflectors being out of adjustment. - It has frequently been seen that the reflectors are thrown out of their proper positions, by wooden wedges being placed so as to raise the fountain to make the oil flow freely.

An open wooden tower, like the beacons recently proposed for Charleston harbor, near Federal Point lightthe two to range nearly with the light vessel on Horseshoe shoalthe object being to dispense with that light vessel altogether; it is of little use. Vessels going up from Smithville pass over the foot of Horseshoe shoal by following the range of Price's Creek lights until they come to a buoy a little below the light-vessel, when they turn and take their course up the river.

The light-vessel is of some use at night in finding the buoy or turning point. The proposed Federal Point range, by its intersection with Price's Creek range, would give the turning point with still more accuracy. The light vessel is also of little use at night for vessels coming down the river; but its place in that particular will be fully supplied, I believe, by the Cape Fear light proposed below.

The proposed beacon should be about three hundred yards from Federal Point light, would be tended by the same keeper, and the annual cost would of course be small compared with that of the light vessel.

Estimated cost of the proposed beacon, with three lamps and reflectors, including site .... $1,500

SIR: In my letter of the 15th instant I recommended a beacon-light near Federal Point light-house, in view of discontinuing the light ship on Horseshoe shoal. Yesterday I enclosed a copy of a letter from the chairman of the commissioners of navigation, Wilmington, relating to that subject. I now subjoin an extract from a letter just received from the collector at Wilmington, bearing on the same.

You will see that the light ship is regarded as of little use by those persons whose opinions are entitled to most respect, as representing the classes most interested.

I have asked for an appropriation; but without waiting for that, I would like to receive directions to put up the proposed beacon and then discontinue the light-vessel.

I have all necessary apparatus here, having spare (dismounted) lamps and reflectors at Price's creek and Oak island. I don't think the whole cost of the beacon, complete, will exceed $800.

It will be similar to the proposed Charleston beacons, of the same size at top, but not so high. I would like much to put it up, as a means of gaining experience, before putting up the higher Charleston beacons.

DEAR SIR: Your communication with regard to the removal of the light-boat, and the substitution of a range of lights on Federal point, was duly received, and laid before the "commissioners of navigation" at their last regular meeting.

The board see but one objection to the change which you propose. From Orton point to the turn of the channel, as indicated by the range of lights at Price's creek, the light-boat furnishes the only guide to vessels going down the river at night. If the light-boat is removed there will be no guide, and you propose nothing to supply the deficiency.

I am instructed by the board to say, however, that for reasons obvious to you they attach but little importance to this objection, and regard it as much more than counterbalanced by the benefits which will unquestionably result from the change.

There is but little navigation down the river at night  that little is confined to a small class of vessels; and the board are inclined to believe that they may be very easily guided by the lights which are now in use.

The board have delayed their action on this matter, that they might have full and free conversation with pilots and shipmasters in whom they had confidence. They have done so, and find no one to differ from the opinion expressed above. 

With sentiments of high regard, your obedient servant,
ROB'T H. COWAN,
Chairman, &c.

Since this appropriation was made the tow boats on the river have increased to three in number, and a fourth is now building. Their captains are much in the habit of running by night; and they now insist that the light-vessel, which it was proposed to dispense with, is highly useful in following the channel above New Inlet to Orton Point. It will, therefore, perhaps, be best to let this vessel remain as long as she lasts, and then adopt some cheaper substitute.

1866  A new light-house has been erected at Federal Point. It consists of a keeper's dwelling, with lantern on top, on a screw-pile foundation.

1867  Federal Point; Oak island.The buildings at these stations were erected in 1866, and are in good condition.

1868  Federal Point light station.Nothing has been done at this station during the year, and having been erected in 1866 it is believed that only incidental repairs will be required next year. The flues at this station are of terra cotta pipes, which at other localities have been found objectionable, and it may be necessary to remove them and substitute other material.
When this light-house was built the site occupied came within the limits of Fort Fisher and was in possession of the government. The land was owned by a private individual and has recently been restored to him by the government. Compensation being asked for the land occupied by the light-house establishment, steps are now in progress for its purchase.

1876  Federal Point, entrance to the New Inlet, North Carolina.This is a two-story frame house on nine iron piles, lantern on top. The house is in need of considerable repairs, which will be made at an early day.

1877  Federal Point, entrance to Sew Inlet, North Carolina.This is a two-story frame dwelling, with a lantern on its roof, and stands on a foundation of nine iron piles. The station needs extensive repairs, but in view of the probable discontinuance of the light on the closing of New Inlet, works to accomplish which are now in progress, nothing has been done toward making them.

1878  Federal Point, entrance to New Inlet, North Carolina.This is a two-story frame dwelling, with a lantern on its roof, and stands on a foundation of nine iron piles. The station needs extensive repairs, but in view of the probable discontinuance of the light on the closing of New Inlet, works to accomplish which are now in progress, nothing has been done toward making them.

1880  The closing of the New Inlet channel by the Engineer Department, rendered the light near that inlet, Federal Point, useless, and it was discontinued. The one on Bald Head was relighted, and it, and a small stake-light on the beach in front of it, serve as a guide through a 16 to 18 feet deep channel across the bar.

1928  Federal Point Lighthouse Reservation conveyed to the city of Wilmington for improvement and maintenance as a memorial to commemorate the Battle of Fort Fisher. The property to be transferred under this Act was conveyed to the United States by deed of April 7, 1817, from Charles B. Gause.

For a larger map of Federal Point Lighthouse, click the lighthouse in the above map.

No light exists at this location today, but there is a sign with information about Federal Point Lighthouse near Fort Fisher Monument.