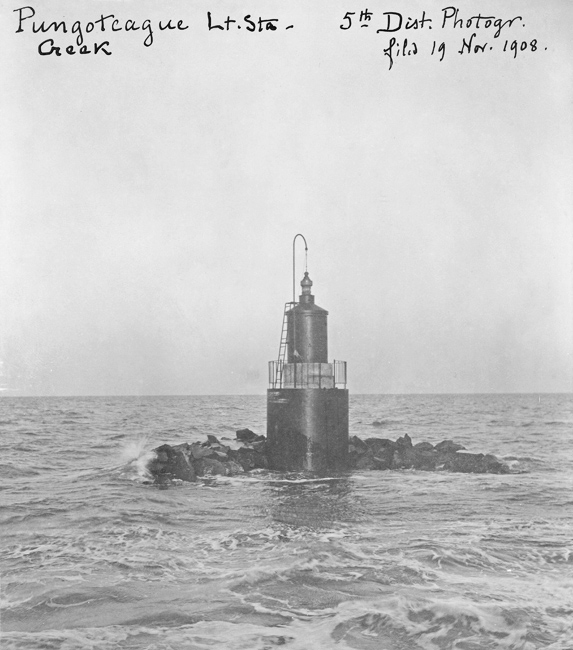 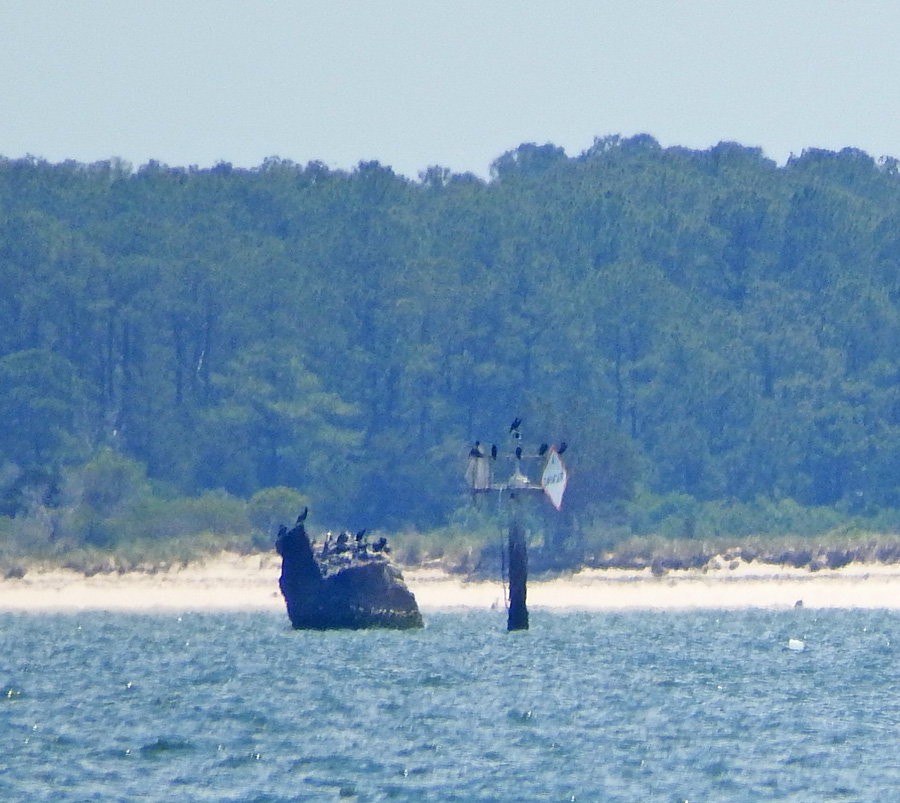 The site for the light house authorized to be placed at the mouth of Pungoteague creek, Virginia, has been selected, and plans and estimates submitted by Major Hartman Bache, United States corps of topographical engineers, which have been approved, and the necessary steps authorized to be taken by that office for the commencement of the work at the earliest practicable day.

For a light-house at Pungoteague creek, Virginia.  Having received from Lieutenant Pennock, U. S. N., light-house inspector of the fifth district, the result of his examination of the character of the shoal at the proposed site for this light, a plan, with an estimate, was submitted to the board, which I was requested to carry out. During the winter, the entire structure, foundation as well as superstructure, was prepared in the workshops of Philadelphia, as far as this could be done, before going on the ground, by fitting the iron-work, and framing the dwelling, tower, and lantern, and marking both for convenience in the final erection. Besides these measures, the doors, sashes, shutters, &c., were made, and the lumber for the floors, weather-boarding, ceiling, stairs, &c., &c., worked. The iron water-tanks, tin oil-cans, &c, and a boat for the station, were also obtained, and the means for constructing a platform on the shoal, including hoisting apparatus for the operations, prepared; and, finally, the necessary tools, glass, paint, and other materials, purchased. All, in short, that could be done in anticipation of the actual construction, received due attention. These preliminaries being completed early in April last, all was shipped on board a suitable vessel, which, properly manned and found, and with a full complement of the necessary mechanics and laborers, set out on the 23d of that month for the scene of operations.
The time estimated for the erection of the structure, including the transits to and from Pungoteague, was six weeks; but owing to the length of these from calms, but principally from either the deficiencies of the apparatus or the impossibility, from the choking by the soil, of sinking plies by atmospheric pressure as small as those used or having conical bases, which involved delays in providing other apparatus, it was increased to more than double that time. Failing, for the reasons just stated, to sink the piles by atmospheric pressure, this method was abandoned and the hydraulic process adopted, and the cylinders settled into the bottom to the required depth.

The structure now completed consists of seven hollow iron piles with conical bases, disposed at the angles and centre of a hexagon, sunk ten feet eight inches into the bottom and rising ten feet above the water, which is 7 ½ feet deep at low tide, being connected by spider-web braces, and also cross-braces between each two consecutive periphery piles, and between each periphery pile and the centre-pile. The piles and the collars and coupling-sleeves, &c., are of cast-iron  the braces of round rolled iron. On the piles as a foundation rests the dwelling, also hexagonal, of one story of nine feet, with a gallery all round, from the centre and floor of which rises a tower of the same figure eight feet in diameter, of such height that, with the lantern, the focal plane has an elevation of about fifty feet. The dwelling, thirty feet in diameter, is conveniently divided into a sitting-room, sleeping-room, store-room and kitchen. Two sash-doors and four windows open on to the gallery, to which there is a convenient ascent from the water by an iron ratline ladder. The ascent of the tower is made through a door from the sitting-room, and by an easy flight of stairs to the lantern, round which there is also a pathway. Further details are deemed unnecessary, as the board is in possession of the drawings from which they may be obtained.
The dwelling and tower, and the lantern in part, are of wood; the material and workmanship, as is the case throughout the whole structure, being of the best character. Two iron water-tanks extending from floor to ceiling, and receiving the water from the roof, are conveniently placed  one in the kitchen, the other in the sitting-room. Oil-cans, &c., are likewise provided. A coal-bunker is arranged under the stairs of the tower, opening on the side of the kitchen. A boat of proper size is furnished, with hoisting apparatus to raise it by the power of one man to the level of the gallery, and the structure protected by a lightning rod. The iron work is painted red; the dwelling, tower and lantern, inside and outside, white; and the gallery floors, roof of house, and lantern, &c., Ohio brown.
The lighting apparatus is of the fifth-order Fresnel, illuminating the whole horizon by a Cornelius lamp, but will be replaced by one of the same order, illuminating seven-eighths of the horizon by a constant level lamp.

Screw-pile light-houses were commenced at Pungoteague, Eastern Shore of Virginia, and on White Shoal, Point of Shoals, and Deep Water Shoal, James river, Virginia; also a light-house on Jordan's Point, on the same river.

Light-house at Pungoteague, Va.This structure was completed in the early part of the fiscal year, and the light exhibited on the 1st of November.

Pungoteague.This house, built on seven pneumatic piles, which was in course of erection at the date of my last report, was completed shortly afterwards, and a fifth order lens was first exhibited on the 1st November, 1854.

The light-house at the mouth of Pungoteague river, Virginia, on the eastern side of Chesapeake bay, was overturned by a large mass of floating ice. The lantern, illuminating apparatus, and many of the other fixtures and supplies, have been recovered from the wreck.

For rebuilding, on a proper site, the light-house destroyed by ice during the last winter, at Pungoteague, $5,000.

The light-house authorized at Pungoteague, Virginia, on the eastern shore of Chesapeake bay, cannot be built until after the meeting of the legislature of the State, jurisdiction ceded, and the title approved in conformity to law.

The title to the proposed light-house site at Pungoteague has not yet been completed.

The title to the site for a light-house at Pungoteague has been procured.

Pungoteague Creek, Chesapeake Bay, Virginia.The following is a copy of a letter dated December 24, 1903, from the Secretary of Commerce and Labor to the Secretary of the Treasury:
This Department, at the instance of the Light-House Board, has the honor to recommend that an appropriation of $8,000 be made for the establishment of a lighted beacon at the mouth of Pungoteague Creek, Chesapeake Bay, Virginia, or near the site occupied by a lighted beacon which was established on November 1, 1854. and was carried away on February 2, 1856, and which has not been replaced. The reestablishment of this lighted beacon is recommended in a petition of many vessel men, which was transmitted to this office by the superintendent of the Baltimore, Chesapeake, and Atlantic Railway Company, through the inspector of the Fifth light-house district.
A private light is now maintained near the mouth of Pungoteague Creek.
It is the opinion of the Light-House Board, in which this Department concurs, that as a light is so much needed here that it is maintained at private expense, it is evident that the Government should establish and maintain such a light, in the interests of general commerce.

Pungoteague Creek, Chesapeake Bay, Virginia.The act approved on June 30,1906, appropriated $8,000 for the establishment of this light. Plans for the structure are being prepared.

Pungoteague Creek, below Tangier Island, easterly side of Chesapeake Bay, Virginia.Plans have been prepared for the proposed structure and proposals, to be opened on July 1,1907, have been invited for furnishing the metal work required therefor.

Pungoteague Creek, Virginia.Amount appropriated, act June 30, 1906, $8,000. The metal work for this structure has been completed and is now stored at the Lazaretto light-house depot. Its erection will be commenced shortly.

For a larger map of Pungoteague Lighthouse, click the lighthouse in the above map.

A modern light marks the entrance to Pungoteague Creek today.