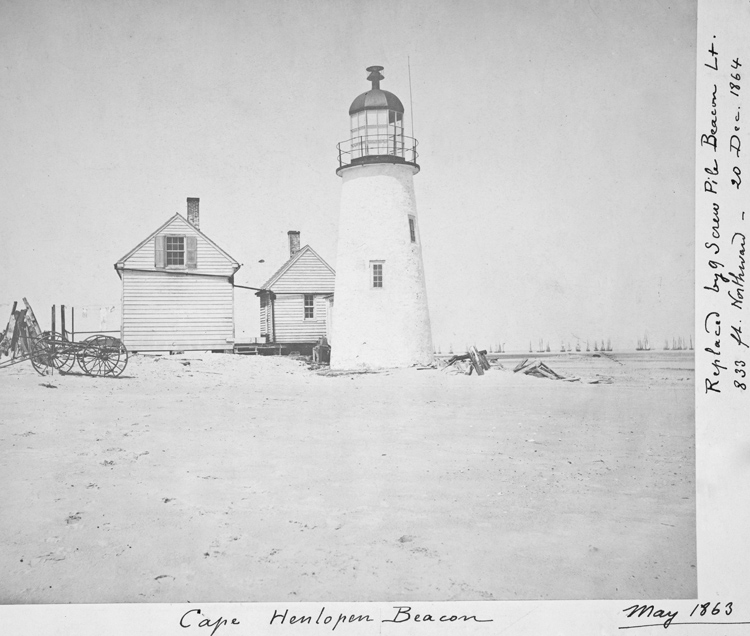 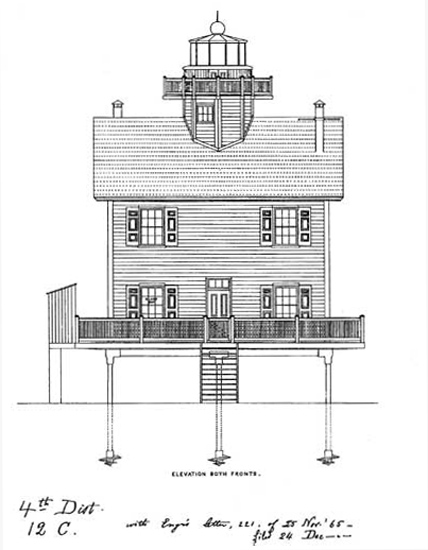 1850  Cape Henlopen beacon light-house. 10 lamps; William Elligood, keeper; supplied May 20, 1850.
Tower wants whitewashing inside and outside very much. Dome of the lantern is very leaky -- so much so that I suppose the covering, which is copper, must be cracked. The lower window is entirely useless, and ought to be closed up with brick. The house is so small that they are obliged to set a butt in the recess of the window. The whole of this establishment is a filthy concern, and never has been, since I have known, kept as it should be. Lighting apparatus is in very good order.
Left May 11, 1849 346 gallons. Found on hand 43 gallons. 303 gallons consumed in 374 days is equal to 295 gallons per year, or 29 8/15 gallons per lamp.
Delivered 196 gallons spring oil, 74 gallons winter oil, on hand 38 gallons, for a total of 308. 74 tube glasses, 4 gross wicks; 25 yards cloth; 1 buff skins; 1 box tripoli; 1 box soap; 1 pair scissors; 2 burners, complete; 1 hand-lamp.
Common burners, 14 -inch reflectors; lantern glass, 10 by 12; all iron burners.
1851  BEACON-LIGHT
For a range and harbor light. Ten 15-inch reflectors and lamps, bad; lantern miserablestove-pipe through the side of it; lantern about 3 1/2 feet too high, (seven panes of glass;) water runs through the lantern, keeping everything in bad condition; tower of rubble-stone masonryno repairs for two years; everything in a wretched condition; threatened with being carried away by the sand; wood-work inside, rotting and going fast; whole establishment in wretched condition, and if not repaired soon, will become unfit for use; no curtains up; keeper complains very much of not being supplied with necessary articles, to enable him to keep his light in order; paint, whitewash, &c, required; no dripping-pans to tanks; tanks not marked, except with chalk; repairs made by direction of a Mr. Middleton, last year, who gave it out for a fixed sum, and never came to see if it was properly executed; tower about forty-five feet high, of sienite; wood-work rapidly decaying inside; masonry of tower very inferior, and giving way, not worth repairing; sand encroaching on tower; board-fence around it, and in bad order, The point, during heavy gales, is submerged several feet.

1854  The catoptric light at Henlopen beacon is also now being replaced by a fourth-order lens, to be put in charge of a special keeper, and not, as heretofore, under the care of the keeper of Cape Henlopen light-house.

1855  Since July 1,1854, lenses have been introduced into this district, as follows: At Cape Henlopen beacon, a fourth-order of 270°, in place of ten lamps and reflectors.

1864  Congress having at its last session appropriated $17,500 for rebuilding the beacon-light at Cape Henlopen, the old site being unsuitable by reason of the beach at that place having made out some 400 yards since 1842, vigorous measures to complete the work at the earliest practicable day have been taken, and it is now making good progress.

1865  Under authority of act of Congress a new beacon-light required at Cape Henlopen, in place of the old structure, in consequence of change of shore-line, has been erected. The new beacon-light is a screw-pile structure, built near the point of the cape. The old beacon was taken down, and some of the materials have been used to protect the site of the new structure. The remainder has been sold at public auction.

1867  Cape Henlopen beacon.The building is now being painted inside and out. The steps leading from the platform to the surface of the soil were last season carried away by storm tides. They have been renewed and arranged to hoist up. A few slight repairs will be made to the station.

1868  Cape Henlopen beacon.The building has been painted inside and out, and the steps leading from the platform to the ground have been repaired. The double terra cotta pipes used for chimney flues, having been found to crumble, are considered unsafe, and fire-brick flues, surrounded by a wall of the same material, will be substituted for the pipes without delay. New brass faucets for the water tanks and an iron water sink have been supplied.

1869  Cape Henlopen Beacon, Delaware.Small repairs have been made to the chimneys and water tanks during the year. The station is in good order and condition.

1872  Cape Henlopen Beacon, Delaware Bay.On the 28th of July last the building was struck by lightning, and it tore off the cornice of the building, but did no other damage.

1874  Cape Henlopen beacon light-station.The water-tank and floor in one room need repairs, and eastern side of the house, which leaks during storms, should be shingled; the house, outside and in, needs painting. Estimated cost of repairs. $600

1875  Cape Henlopen Beacon, Cape Henlopen, Delaware.Complaint having been made of the want of brilliancy of this light, a double-wick burner was placed in the apparatus with satisfactory results. The repairs authorized by act approved March 3, 1875, for this station, are now being made. An appropriation of $12,000 was made by the same act for establishing a steam fog-signal here, which work is now in progress. It is proposed to place duplicate sirens at this station.

1876  Cape Henlopen beacon, sea-coast of Delaware.Under a special appropriation for that purpose, a new brick structure has been erected near this station, and supplied with duplicate steam-siren fog-signals, affording an important additional aid to vessels entering Delaware Bay in foggy weather. A plank walk has been built from the light-house to the fog-signal house, and electric bells provided for calling assistance in case of need.

1876  Cape Henlopen, Delaware.First-class steam siren in duplicate; completed and first put in operation December 29, 1875; in good order and efficient in every respect.

1877  Cape Henlopen, Delaware.First-class steam-siren, in duplicate; in good order and efficient in every respect.

1879  Cape Henlopen Beacon, entrance to Delaware Bay, Delaware.The fog-signal machinery was repaired, and the keepers' dwelling, which had been built for the accommodation of only one keeper, before the erection of the fog-signal, was enlarged so as to accommodate the two keepers now at this station. Some repairs are necessary at this station, and will be made during the present season.

1880  Cape Henlopen Beacon, entrance to Delaware Bay, Delaware.The boilers of the steam fog-siren were furnished with new grate-bars and otherwise repaired. An addition of two rooms, each 14 feet square, was rendered necessary by the appointment of another keeper, who is to operate the new steam-siren at this station. These were built, together with a gallery around it, and storm-doors were furnished. The east side of the dwelling was shingled, to give better protection against easterly storms. The structure was painted inside and out.

1881  Cape Henlopen Beacon, northern end of the cape, Delaware Bay, Delaware.Repairs were made to the boilers, &c, of the steam fog-signal sirens. New tubes are required in both boilers, which will be put in during the present season. New water-tanks are required and will be provided as soon as practicable.

1883  Cape Henlopen Beacon, on the northern end of the Cape, Delaware. Steam-siren, first-class. The engine and boilers were repaired.

1883  Cape Henlopen Beacon, on the northern end of the Gape, Delaware.The steps leading from the beach to the platform having been torn away and carried to sea in a storm, they were replaced by new ones hung on hinges, and the necessary tackle was supplied with which to raise them above the platform in case of necessity. The engines and boilers of the fog-signal were repaired, and an iron pipe and connection for the force-pump were furnished. An attempt was made to secure a permanent supply of fresh water for use in the boiler of the fog-signal by putting in an 8-foot drive-well, but it was found that the supply of fresh water was limited; so it was driven further, when the water became brackish, and finally salt. When it had reached the depth of 40 feet, with no better results, the pipe was withdrawn and the project abandoned. The sea encroached upon the ocean side of the station until the high-water line came under the light-house, and the question of the protection of the structure came under consideration. Meantime, the bark Minnie Hunter came ashore on the beach about 550 feet to the northward of the light. Since then, measurements show that from April 2 to May 20 the ordinary high-water line had made out from the site of the structure nearly 100 feet, and that the level of the sand under and around the structure was raised some 20 inches. This change was doubtless occasioned by the wreck acting as a jetty. Measurements will be made to note any changes that may occur in the beach, and the proper steps will be taken to replace the wreck with a permanent jetty, if it is in danger of being carried away. The boundaries of the site were marked with stone monuments.

1884  Cape Henlopen beacon, northern end of Cape Henlopen, Delaware. The beach is being cut away under this station, so that at nearly every high tide the sea comes up under the house. In December, 1884, brush loaded with stone was placed around the station, which caused the sand to bank up, but in a few weeks a storm carried it all away. The plank walk, 125 feet long, was rebuilt. The fog-signal machinery was thoroughly overhauled and repaired. It is the intention of the Board to put a beacon on the south end of the Delaware Breakwater. Then the present beacon can be discontinued. The station is in good order, but cannot be considered as safe, as a single long violent storm might throw down the beacon.

1885  Cape Henlopen beacon, on the northern end of the cape, about a mile from the main light, Delaware.This beacon having become unsafe from the undermining of its screw-pile foundation, the light was, on October 1,1884, discontinued, and the beacon, with the exception of the piles, was removed. A shanty for the keeper of the fog-signal was put up near the fog-signal house, and the material from the torn-down beacon not used for the shanty was stored in its vicinity.

1886  Cape Henlopen, Delaware. The fog-signal was discontinued on the establishment of the fog-signal at Delaware Breakwater (east end), November 5, 1885.

For a larger map of Cape Henlopen Beacon Lighthouse, click the lighthouse in the above map.

The site of this light is now under water.