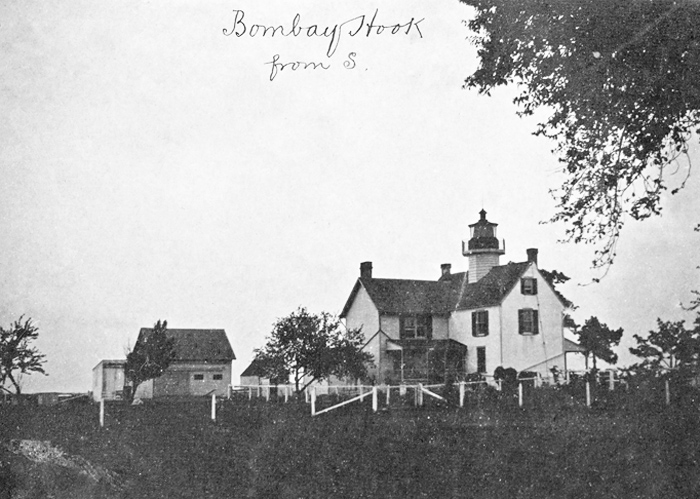 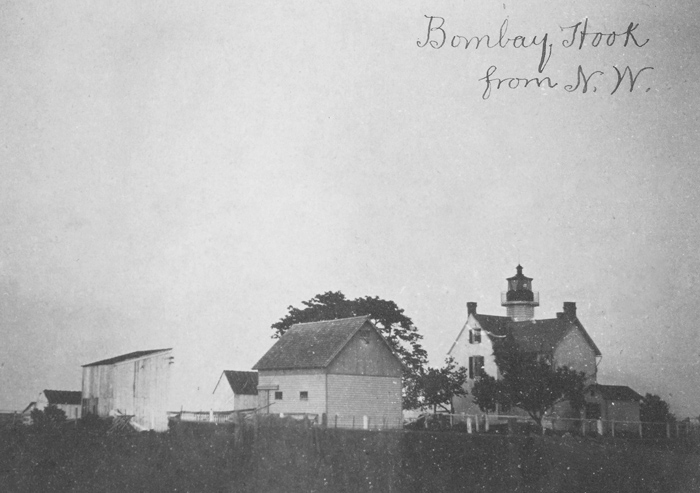 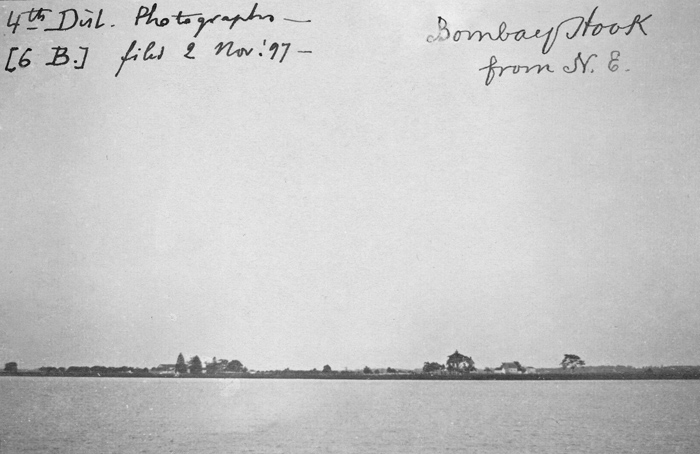 1838  Bombay-hook light-house.Light on keeper's dwelling; burns ten lamps with spherical reflectors. Light well kept. It will be necessary to raise this house one story, to permit the light to be seen above the fall and spring fogs. In all instances where the cupolas for lights are erected on the dwelling-houses of the keepers, I have found the latter in bad condition; the plastering either falling off, or the walls cracked, and the house leaky, which evidently arises from the frequent and violent agitations of the cupola attached to the building, by boisterous gales of wind. To obviate this, I would recommend that the dwelling be detached from the tower.

1850  Bombay Hook light-house.  10 lamps; Duncan Stewart, keeper; supplied May 23, 1850.
This establishment is one of those few to be found that I like to visit. Things are neat and clean  a place for everything, and everything in its place. Light-house, which is the dwelling, the lantern being on the roof, is in good order, except being leaky about the roof, or rather about the lantern. Kitchen chimney has been fitted, and a new pump put in use since we supplied it last year. Lighting apparatus is now in good order and clean. Keeper will be 87 years old to morrow, if he lives. He now lies very sick; has been a fine worthy man ever since I knew him.
Left May 8, 1849 392 gallons. Found on hand 96 gallons. 296 gallons consumed in 380 days is equal to 282 gallons per year, or 28 7/10 gallons per lamp.
Delivered 179 gallons spring oil, 104 gallons winter oil, on hand 96 gallons, for a total of 279. 15 tube-glasses, 2 gross wicks; 25 yards cloth; 1 box tripoli; 1 pair scissors; 2 burners, complete; 5 outside burners; 1 fountain.
Common burners, 14-inch reflectors; 2 spare lamps, in good order; put on iron burners.

1851 - Bombay Hook June 26, 1851 - 9 a.m.
Delaware bay; Duncan Steward, keeper - 89 years old; daughter keeps the light. Built in 1831, and rebuilt in 1841, on the top of the dwelling. Built by Winslow Lewis; unfinished; no plastering of tower.
Ten 13-inch reflectors and tin lamps, common burners; reflectors of thin copper and a very thin film of silver-plating, much worn off in spots ; not firmly placed on the frame, and easily put out of adjustment. Lantern small, glass 8 x12 inches; sashes thick and blackwant painting very much; the frame of the dome and lantern very dirty for want of paint. Lantern leaks very much; until rebuilt, leaked in every part of building; tower so open that it is difficult to carry a light into the lantern: wood-work rough and not planed; floor of lantern coppered; no curtains allowed; Captain Howland tinkered up the lamps and burners in May; four spare lamps, burners very common. House wants painting; spouts, & c., rusty for want of paint. A well, in good order; a pump (pine) put in last year, but it injured the water.
Inspected last June by the collector. Oil generally good. Captain Howland generally makes repairs of lamps, &.c., &c, as required. No lime allowed for whitewashing; whitewashed by keeper at his own expense.
Roof of the house very openplaces a quarter of an inch between the shingles; brick-work rough; floors not tongued and grooved; rough and open in the attics; garret-rooms not plastered; wooden pillar, supporting steps, much worm-eaten; cellar in bad orderwants cementing and repairs; kitchen in cellar; oil smells baldly.
May 20, Captain Howland delivered winter oil, 100 gallons; summer, oil 138 gallons.
Common scissorsno trimming-scissors; trims the lamps at midnight during summer. So far as the keeper's duties are concerned, the establishment is in good order, neat and clean.
Repairs to the out-houses, &c, neglected by the Contractor who undertook the work.

1855  At Bombay Hook and Christiana, new iron lanterns for fourth-order apparatus, and at Cohanzey and Mahon's river new iron lanterns for fifth-order, have been substituted for the old and defective style hitherto in use. These were furnished with very wide vertical astragals and inferior glasses, 9 inches by 12. The new ones have diagonal astragals, and superior French plate glass of very large dimensions. In placing these lanterns the towers have been necessarily remodelled, and in great part renewed.

1867  Bombay Hook  Slight repairs are required to the plastering and will be made before the close of the season.

1869  Bombay Hook, Del.The repairs in progress at the date of the last report were completed in last October, consisting of a new roof to the main building and kitchen, new galvanized iron water-gutters and conductors, repairs to cistern, with new pump and check-valve; fence repaired on the front of the lot; picket fence repaired; a new roof to privy; replastering and new sill to front of piazza. The dwelling was painted last year inside and out. The smoke ventilator on the kitchen chimney will be renewed this season.

1880  Bombay Hook, mouth of Duck Creek, Delaware Bay, Delaware. A new fence was put up, the front and back porches were rebuilt, the first floor in the dwelling was renewed, the first story was repaired, new shutter-hinges were put on, the water-gutters and conductors were renewed, a new pump put in the water-cistern, and the structure was painted inside and out. A new oil-house was erected outside of the dwelling.

1890  Bombay Hook, near mouth of Duck Creek, Delaware River, Delaware.The frame stable is in course of re-erection, and minor repairs were made.

1891  Bombay Hook, mouth of Duck Creek, Delaware Bay, Delaware. The brick kitchen attached to dwelling was removed and replaced by a two-story frame addition, and various repairs were made. The fences were rebuilt and the brick walks were relaid and lengthened.

1899  Bombay Hook, Delaware River, Delaware.A topographical survey was made and stone monuments were set to mark the reservation boundaries.

1900  Bombay Hook, Delaware River, Delaware.The grounds about the light-house were graded so as to drain the pool on the front of the reservation and to give the lawn a smooth surface. The disturbed portions were reseeded and the fences were repaired. Various repairs were made.

1901  Bombay Hook, Delaware River, Delaware.Corrections were made to the map of the station, bringing it up to date.

1902  Bombay Hook, Delaware River, Delaware.Corrections were made to the maps of the station, bringing them up to the date of the last survey. A new force pump was furnished for the well.

1907  Smyrna Range lights, Delaware Bay, Delaware.A survey of the proposed light-house site was made and a map was plotted and the site was purchased.

1910  Isolated oil houses were erected at the following-named stations during the fiscal year 1910 from the appropriation "Oil houses for light-stations."

For a larger map of Bombay Hook Lighthouse, click the lighthouse in the above map.

No light exists at this location today, but there are some remains of the lighthouse foundation and oil house.