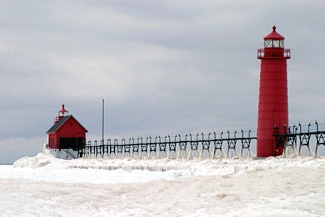 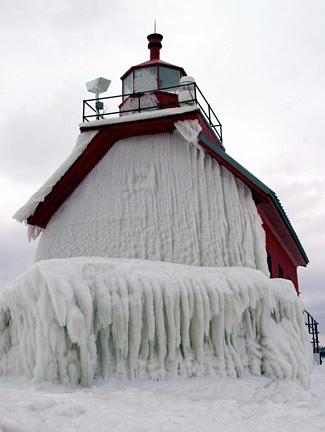 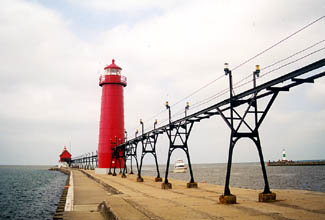 The first permanent settlers arrived at Grand River on November 2, 1834 from Mackinac Island, under the leadership of Reverend William Montague Ferry, and the following year, the settlement was platted and named Grand Haven, in recognition of its safe and spacious harbor. After having been appointed by the Board of Navy Commissioners to examine and select sites for lighthouses on the Great Lakes, Lieutenant G.J. Pendergrast gave a glowing endorsement for a lighthouse at Grand Haven in 1837:

Grand river is 40 miles north of Kalamazoo. This is by far the largest river that empties into Lake Michigan, having no less than two fathoms water on the bar at its mouth. It is the only safe shelter for large vessels on the east shore south of the Manitou islands. Of course, I did not hesitate to report in favor of a light here. My examinations here were of a limited nature, but I am inclined to think a small amount would make this by far the best harbor on Lake Michigan. The channel at the mouth only requires to be straightened a little so as to render it more easy of entrance.

Messrs. Rogers and Burnett of Milwaukee were hired to construct a stone dwelling and lighthouse near the mouth of Grand River, and during the summer of 1838, Lieutenant James T. Homans called to visit the work. Homans reported to Stephen Pleasonton, the overseer for the countrys lighthouses, that inferior materials were being used, and the work was on par with the materials. Pleasonton sent Trueman H. Lyon to examine the lighthouse, and he found that Homans report was incorrect. Only the foundation of the dwelling had been finished during Homans visit, and the contractors were not present to explain that the material on site had been condemned as inferior.

The stone used to complete the dwelling and tower was quarried in Green Bay, while the stone steps came from Cleveland. Having heard of the unfavorable report of Lieutenant Homans, the leading citizens of Grand Haven sent a letter to Trueman Lyon in October, 1838, stating that the materials used were of good quality and the work was done in a very permanent and substantial manner. These citizens and Mr. Lyon noted, however, that much of the bank in front of the lighthouse had been washed away and that during storms the water came within thirty feet of the structures.

Nehemiah Merritt was hired as the lights first keeper in August 1839. The stone lighthouse stood thirty feet tall, and in 1848, four oil lamps, backed by fourteen-inch reflectors, were being used in its lantern room to produce a fixed white light.

It wasnt poor materials or workmanship that doomed the lighthouse, but, as feared, shore erosion. Though a timber wall had been built to protect the property, on the night of December 17, 1852, it gave way, allowing storm-driven waves to pummel the lighthouse. A wall in the dwelling collapsed early the next morning, and the tower followed suit later that day.

Work on a replacement lighthouse commenced in 1854 on a bluff above the original site, and the light was placed in operation the following year. The lighthouse consisted of a circular tower attached to a six-room, one-and-a-half-story dwelling, both of which were built of rubblestone. The tower stood just over twenty-four feet tall, but the bluff gave the light a focal plane of seventy feet above the lake. A bulls-eye panel revolved around the fixed fourth-order lens in the lantern room to produce a white flash every ninety seconds.

In 1868, the tower was raised four feet and equipped with a new lantern room. This work was performed during the winter to avoid having to erect a temporary tower for the light.

The Detroit and Milwaukee Railroad established a line from Detroit to Grand Haven in 1858 to link with its ferry service providing cross-lake service to Milwaukee. To accommodate these ferries, the railroad company built a pier at Grand Haven on which it maintained its own light. After the federal government extended the pier between 1867 and 1870, the light was moved to the new pierhead, but it was later discontinued, as it could not be reached during heavy gales. The Lighthouse Board requested $8,000 in 1870 for a wooden tower, a bell, and 1,200 feet of elevated walkway for the pier, and these were put in place during 1871. A steam siren, installed in a fog signal house directly under the pierhead light, commenced operation in December 1875, replacing a fog bell that was rung by a hot-air engine.

A second assistant keeper was assigned to the station in 1876 to help with the added responsibility of running the steam fog signal. In 1883 and again in 1885, the light and fog signal were moved lakeward as the pier was extended. During a ferocious gale on December 9, 1886, the beacon was forced twelve feet backward, crushing the elevated walk behind it. The outer end of the crib settled so that it was below lake level, and the fog signal house was slightly damaged.

A tubular lantern light was established on November 30, 1889 to range with the existing light on the pier. An elevated conduit was added in 1894 so the keeper could run the lantern to and from the outer light from the safety of the inner light. On December 10, 1892 the period of the flash produced by the bluff-top lighthouse was reduced to sixty seconds from ninety seconds through the installation of an additional flash panel.

The front range light was discontinued on May 4, 1895, after the main pier light and fog signal were moved some 500 feet to the outer end of the pier. Two fog-signal buildings contained the duplicate steam sirens prior to 1895, but after the move, one of the fog-signal buildings was enlarged to hold both sirens. A siren sounded by air compressed by oil engines replaced the steam siren in January 1902. The bluff-top light was discontinued for ten days in February 1902 so a new pedestal and revolving apparatus could be installed.

During 1904, a cylindrical metal tower was built atop a concrete foundation near the outer end of the south pier, and on January 12, 1905, the lens from the old bluff-top lighthouse, which was discontinued, was established in the new pierhead tower.

On April 28, 1906, a temporary red lens-lantern light was established shoreward of the metal pierhead tower to form a range. Over the next year, the cylindrical metal tower was moved from the pierhead to a new concrete foundation nearly 600 feet shoreward, and the fog signal building was relocated to the pierhead, where a lantern and lantern gallery were erected on its outer gable end. A sixth-order lens was used atop the fog signal building to produce a fixed red light, while the fourth-order lens in the cylindrical tower retained its characteristic of a fixed white light varied every sixty seconds by a white flash. On May 15, 1917, the rear light was changed from white to red and the front light was changed from red to white. The structures were painted to match the color of their light.

A lighthouse keeper at Grand Haven gave the following description of a meteor that fell from the sky over Lake Michigan on November 26, 1919. What looked like a ball of fire appeared to fall in the lake about fifteen miles south of me. I thought it to be a falling star. In its rush downward at terrific speed, I could clearly hear it whistle. When it seemed that it was striking the water, a flash of flame shot into the air and caused a great disturbance. The meteorite caused a deep and prolonged rumbling that shook houses in southwest Michigan and neighboring regions of Indiana and Illinois and caused residents to flee in panic.

The Bureau of Lighthouses requested $12,700 in its annual report of 1921 for needed improvements at Grand Haven:

The present air siren fog signal at Grand Haven has been the subject of constant complaint from the vessel interests using this port, which include important car ferry and line boats which enter the port 12 months in the year. It is proposed to replace the present equipment with the latest type of diaphone fog signal and operate same by electric power, which will place the equipment at this station above further criticism; also to place electric light in front lens.

In 1922, a concrete superstructure, whose outer portion was made to resemble the prow of a ship to provide protection from the lakes waves, was placed beneath the old fog signal building, and a type F diaphone was installed in place of the air siren. The intensity of the front light was increased at the same time from 80 to 1,200 candlepower through the installation of an electric light. A radiobeacon was established at Grand Haven in 1927 as an additional aid to mariners.

In 1922, Keeper Charles Bavry and his two assistants, Rolla Paris and Carl Nafus, were commended for rescuing two young men whose canoe capsize near their station.

No longer needed, the tower was removed from the bluff-top lighthouse in 1910, and the dwelling was enlarged to provide improved quarters for the keepers of the pierhead lights. The dwelling was sold at auction in 1956 but remains standing to this day. The Fresnel lens, crafted in 1854 by Henry-Lepaute and used in the 1855 tower and the cylindrical pierhead tower, is on display in the Tri-Cities Historical Museums Train Depot Museum in Grand Haven.

The outer end of the north pier is marked by a D9 tower.

In 2009, Grand Havens lighthouses, deemed excess by the Coast Guard, were offered at no cost to eligible entities, including federal, state, and local agencies, non-profit corporations, and educational organizations under the provisions of the National Historic Lighthouse Preservation Act of 2000. The City of Grand Haven was given a deed to the two pierhead lights in December 2012, and the Grand Haven Lighthouse Conservancy, a community group, was formed to care for the structures. The group held a public open house in the fog signal building on Labor Day, 2011, and is actively raising money to restore the lighthouses.

After the conservancy group had raised over $400,000 through brick sales, fun runs, T-shirt sales and streetlight post banner sales, the Grand Haven City Council approved the expenditure of $259,577 to paint the structures, inside and out. The work was carried out during the late spring and early summer of 2013.

For a larger map of Grand Haven Lighthouse, click the lighthouse in the above map.

From Interstate 96, take either Highway 104 at Exit 9 or Highway 31 at Exit 1AB, and drive towards Grand Haven. Highway 104 will connect with Highway 31 just before Grand River. Cross Grand River and then turn right on Franklin Avenue. Follow Franklin Avenue until it ends at Harbor Drive. Take a left onto Harbor Drive and follow it to Grand Haven State Park from where you can walk the breakwater to Grand Haven Lighthouses.

The Fresnel lens, used in the 1855 tower, is on display in the Train Depot Museum, part of Tri-Cities Historical Museum in Grand Haven.

The lighthouse is owned by the City of Grand Haven. Grounds open, tower closed.