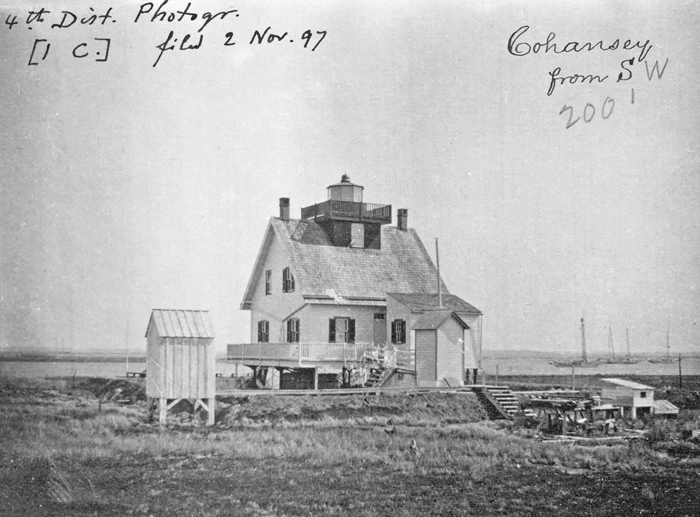 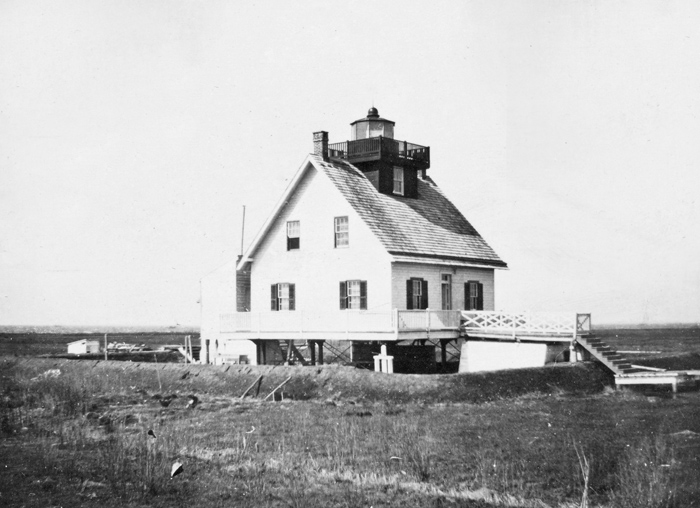 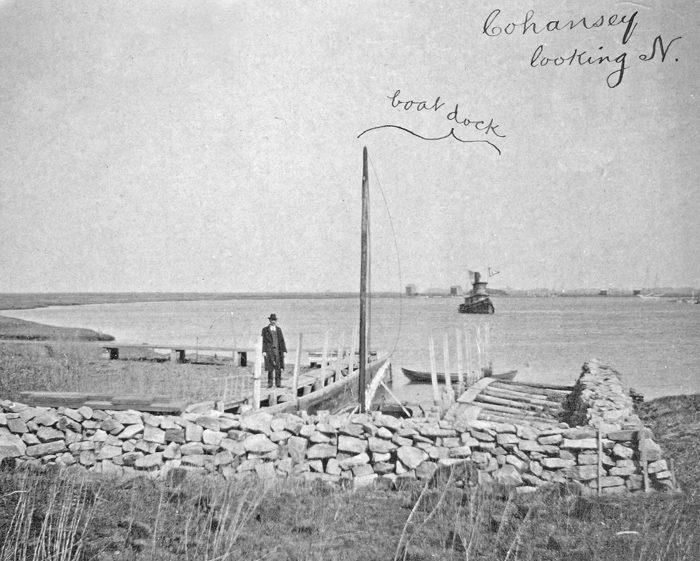 1837  Contracts have been entered into for building and completing the lighthouses at Cohanzy and at Egg island, by the 15th November, (instant.) previous to which no payment is to be made.

1855  At Bombay Hook and Christiana, new iron lanterns for fourth-order apparatus, and at Cohanzey and Mahon's river new iron lanterns for fifth-order, have been substituted for the old and defective style hitherto in use. These were furnished with very wide vertical astragals and inferior glasses, 9 inches by 12. The new ones have diagonal astragals, and superior French plate glass of very large dimensions. In placing these lanterns the towers have been necessarily remodelled, and in great part renewed.

1855  Cohanzey light-home.Having been directed by the board to examine this locality, I found the same operation taking place here as at Reedy island, viz: the abrasion of the shore of the bay by the storms and ice. A report was accordingly made, proposing to continue the protection, commenced previously, by making a breakwater of piles, sheathed with plank and revetted with building-stones.

1863  The sites of the light-houses at Cohansey and Egg island having been found to require considerable protection, the amounts necessary to complete the works have been asked for in a special estimate.

1864  The necessity of works of protection to the light-house site at Cohansey, which is in danger from the steady encroachment of the water, and for which a special estimate was submitted at the last session of Congress, still continues, and an item to cover the expense is again submitted.

1865  The deficiencies and wants of the district have been brought to the attention of Congress, and special appropriations asked for to meet cases which cannot be put off without incurring greater ultimate expense. Among these cases, that of Cohansey light-house is especially urgent. The necessity for providing an effectual protection to the work against the steady encroachment of the water, which has been several times urged upon Congress, is now more pressing than ever. A special estimate is therefore submitted to cover the cost of suitably banking in the site.

1866  At Cohansey light-station the buildings have been protected from the encroachment of the sea by a new earth-bank enclosing them, the outside face of which is faced with stone. This enclosure having been properly ditched and drained, the ground is becoming dry and solid, and the station is materially improved by the embankment.

1867  CohanseyThe earth bank enclosing the building has, after settling sufficiently, been increased in height, and the new earth has been faced with stone. Some repairs are required to the oil-house and plank platform, which will be made before the close of the present season.

1868  Cohansey.During the past year the frame oil-house has been furnished with new cover posts, and the plank platform and plastering in the kitchen have been repaired. The work of putting on a new roof, new gutters and conductors, is nearly finished. A set of lantern curtains has been supplied.

1869  Cohansey, N. J.The repairs in progress at the date of the last report were completed last November. They consisted of a new roof on the main building, kitchen, and oil-house; new galvanized iron gutter and conductor fitted, and small repairs upon the plank platform. These buildings will require to be painted next year.

1870  Cohansey, New Jersey, Delaware Bay.The following repairs have been made at this station: The bank inclosing the building has been thoroughly repaired and raised 18 inches above the original level for a distance of 250 feet, where it was damaged by the storms and high tides of last spring, the outer slope and new top of the bank protected with stone, the old gas-house taken down, and the debris (bricks and mortar) deposited along the bank to protect it from the wash of the sea. The removal of the old gas-house adds very much to the good appearance of the station.

1874  Cohansey light-station.A special appropriation of $400 was made during the last session of Congress for a new boat-house at this station, which will be built. The building needs thorough overhauling and renovating to the extent of leaving little of the present building but the walls, which are passably good; for this purpose an appropriation of $8,000 is asked.

1875  Cohansey, Delaware Bay, New Jersey.As stated in the last annual report, the buildings at this station are in a dilapidated state, and should be rebuilt.

1876  Cohansey, Delaware Bay, New Jersey.The earth bank inclosing the buildings has been raised one foot all around, the sluice put in good order, the platform on the front of the dwelling renewed, and other repairs made, placing the station in good condition.

1878  Cohansey, Delaware Bay, New Jersey.This station was considerably damaged by the storms and high tides in October and November last. Repairs have been made to the foundation of the dwelling and oil house. The earth embankment has been raised and repaired, and the plank platform on the front of the building repaired.

1879  Cohansey, Delaware Bay, New Jersey.The storm of October 23, 1878, damaged this station greatly. Such repairs to the embankment as were necessary for the protection of the site have been made; but the structure was so much injured as to render the rebuilding of the lighthouse necessary. An iron-pile light-house should be built, so that in great storms the water could pass under it. It is recommended that an appropriation of $15,000 be made for this purpose.

1880  Cohansey, Delaware Bay, New Jersey.To render the station habitable, the foundation walls were repaired and the end walls of the building tied together with iron rods passing through them. This station is on the marsh. It is an old brick building which was erected in 1838. As long ago as 1875 it was in such a condition that a new structure was recommended. In 1876 repairs were made which, it was hoped, would make the building last for a number of years; but in the storm of October, 1878, the sea passed entirely over the site to the depth of several feet, greatly damaging the foundation and nearly destroying the structure. A new structure on piles, which will let the sea pass under it without damage, should be built. A buoy-depot at this station has been repeatedly recommended, as it would be a saving of time and expense, by making unnecessary the long trips now made by the tender to the main depot. For the rebuilding of the light-house and the erection of the buoy-depot, an appropriation of $17,000 is necessary.

1882  Cohansey, near mouth of Cohansey Creek, New Jersey.A new cedar water tank was placed in the kitchen, as the brick cistern was damaged and useless. This station is on the marsh in an exposed position; it is an old brick building erected in 1832; in 1875 it was in such bad condition that a new structure was proposed; since then it has been damaged several times by storms, and repaired; at present it is hardly habitable. A frame structure on piles should be built in a different locality.

1883  Cohansey, New Jersey.An appropriation of $1,000 to purchase additional land for the site at this station was made by the act approved August 7, 1882. The ten acres selected were purchased and the title papers were approved January 24, 1883. Plans for the new structure were made, and the building is now under contract.

1887  Cohansey, near the mouth of Cohansey Creek, New Jersey.The old light-house on the marsh at the mouth of the creek was sold in August last.

1888  Cohansey, Delaware Bay, New Jersey.A red sector will be introduced into this light, covering an angle of 42 degrees, so as to give a well-defined line for keeping vessels off from Ben Davis' Shoal and to guide into the cove and mouth of the river. The intensity of the white light will be somewhat diminished over an angle of about 74 degrees, because of the complaints of mariners that its present brightness prevents them from seeing the shoal while close to the light on entering the river.

1889  Cohansey, Delaware Bay, New Jersey.The characteristic of this light was changed by the insertion of a red sector and by partially obscuring the white light from points in Cohansey Creek.

1897  Cohansey, New Jersey.The oil was moved into a rough, detached shed, which is to be used until a fireproof structure can be provided. The elevated foot walks were repaired. The area under the house was raised about a foot to keep it dry, and the drains and sluices were put in order. The boat dock was deepened about 2 ½ feet, and its pile bulkhead was riprapped on its two most exposed sides.

1907  Cohansey, Delaware Bay, New Jersey.The red sector of this light was widened about 4 degrees on November 23, 1900. A new sluice was made for the bank and various minor repairs were made.

1913  Postmaster Frank D. Pedrick acquired Cohansey Lighthouse at auction in April 1913 along with eight acres of surrounding land. A new light was erected nearer the point, allowing the old one to be sold. A few months later, the government rescinded the sale.

1932  Congressman Bacharach receives permission from the Commissioner of Lighthouses to allow the Sea Scouts of Bridgeton to use Cohansey Lighthouse as a sea scout base.

For a larger map of Cohansey Lighthouse, click the lighthouse in the above map.

A modern light on a skeletal tower still serves today as Cohansey Light.