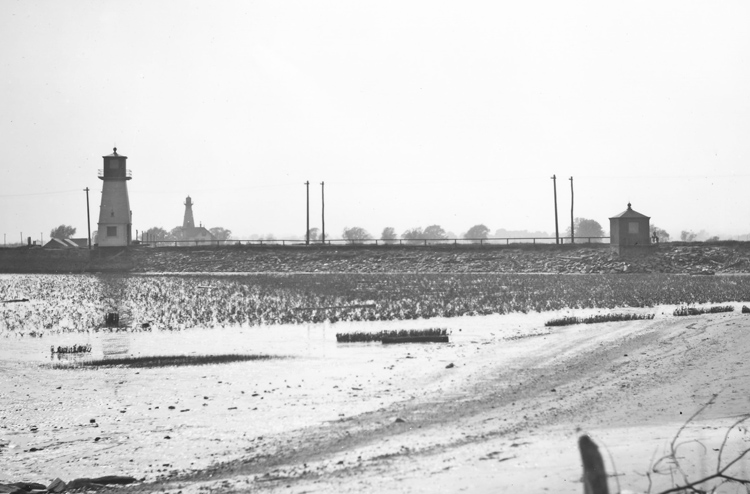 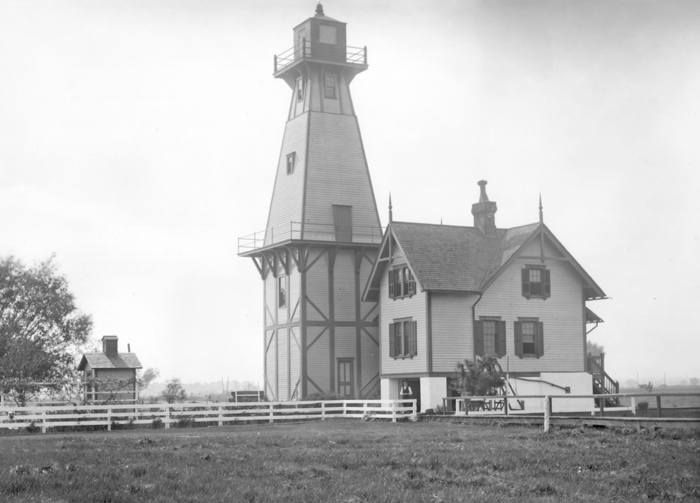 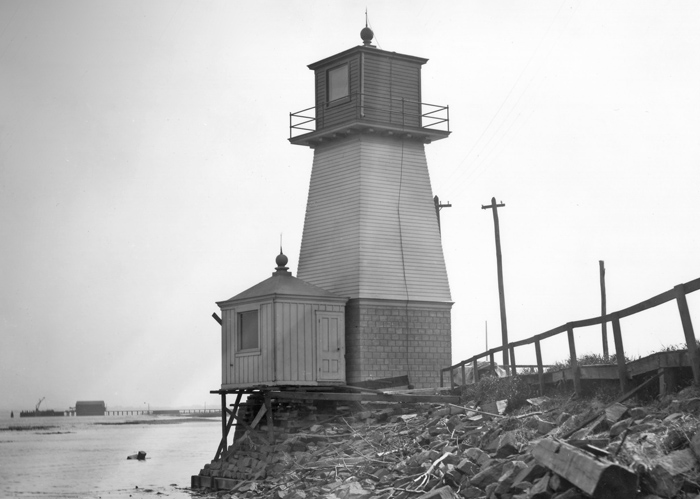 1881  Horseshoe Shoal Ranges, Delaware River. The deeds and title-papers for the purchase of the site at Howell's Cove, New Jersey, having been approved by the Attorney-General, and the right to build on Fort Mifflin reservation having been obtained, advertisements were issued for the frame structures necessary to form two ranges for passing the Horseshoe Shoal, Delaware River, and bids were opened on February 14 and forwarded to the Light-House Hoard. The bid of Bachman & Forrey, of Columbia, Pa., was accepted and the contract duly approved. The contractors are at work and the buildings are nearing completion. The site of Howell's Cove was fenced in.

1882  281-286 Horseshoe Shoal Range, Delaware River, Pennsylvania and New Jersey On September 9, 1881, these range-light structures were completed and accepted. These lights were exhibited on October 1, 1881, and the light at Fort Mifflin light-station was discontinued. A picket fence was erected, inclosing the dwelling, the rear tower, and about three acres of land, for the use of the keeper. A stone wall was laid in cement mortar under the front and sides of each of the front structures of the west group, to protect them from the wash of the sea. It is proposed to drain the site of the west group by ditching, and putting in a sluice in the river bank.

1883  281, 282, 283. Horseshoe Range, (west group,) on Fort Mifflin Reservation, Pennsylvania.A sluice 64 feet long was put in, and ditches were cut, to drain the site. A brick wall around the cistern, to protect it from frost, was built, the steps leading from the kitchen were changed, and the ground under the dwelling was raised and levelled; new galvanized-iron roofs and cowls were placed on the three lanterns, and certain minor repairs were made.

1883  284, 285, 286. Horseshoe Range, (east group,) in Howells Cove, below Gloucester, New Jersey.The boundaries of the site were marked with stone monuments, and various minor repairs were made.

1888  312, 313, 314. Horseshoe range beacons (east group) in Howells Cove, below Gloucester, Delaware River, New Jersey.Repairs were made to the lantern door and water-table of the tower of the rear beacon and to the roof of the dwelling, and three new reflector lamps were supplied. The right of way was opened from the county road to the reservation and the road was graded and graveled, and a gate put up.

1890  354, 355, 356. Horseshoe range beacons, east group, below Gloucester, Delaware River, New Jersey.A reflector was placed in the rear beacon to increase the strength of the light. A well was driven at the station and a pump was furnished.

1891  356, 357, 358. Horseshoe Range (west group), on Fort Mifflin Reservation, Delaware River, Pennsylvania.The raised foot walk from the dwelling and the rear beacon to the front beacons on the river bank, 1,600 feet long, and the frame barn, were rebuilt and various repairs were made.

1891  359, 360, 361. Horseshoe Range (east group), Delaware River, New Jersey.The frame tower of the rear beacon was sheathed from top to bottom with shingles. A kitchen addition, with pump and sink, was built, the stable was rebuilt and various repairs were made.

1897  471-473. Horseshoe Range (east group), Delaware River, New Jersey. The high tower was repaired. The dwelling was put in thorough order. The grounds around the dwelling and front beacons were graded and drained. The entrance road was surfaced. The sides and front of the site, 800 feet, were fenced in.

1900  510, 511,512. Horseshoe Range (west group) Delaware River, Pennsylvania.A topographical survey of the site and of the fill recently made by the International Company on the river front was made and a map was platted. Various repairs were made.

1902  Horseshoe Ranges (West Group)
Range lights for passing through Horseshoe Bend, Delaware River. The lights are in two groups, each group consisting of three lights a rear light, fixed white, and two front lights, one fixed white and the other fixed red.
The rear light of the first or west group, with its WHITE front light, forms a range to mark the channel passing League Island. Vessels running up stream pass directly from the Fort Mifflin Bar Cut Range to this range and hold it to the LOWER TURNING-POINT, which is where the lower or red front light of the east (Howell Cove) group is in line with the rear structure of that group. At this point a change of three points must be made to port.
Horseshoe Ranges (East Group)
The rear light of the second or east group, with its appropriate white or upper front light, forms a range marking the channel from opposite Greenwich Point to the UPPER TURNING-POINT, which is where the upper or red front light on Fort Mifflin (west group) comes in range with its appropriate rear light. At this intersection vessels going down stream change their course three points to starboard. The distance between these turning-points is about five-eighths of a mile, which is unmarked.

1903  552-553-554- Horseshoe range, east group, Delaware River, New Jersey.Two of the light-house site corners were marked with granite boundary stones; a topographical survey of the site was made and plotted. Various repairs were made.

1907- 577, 578, 579. Horseshoe Range, East Group, Delaware River, New Jersey.On May 13, 1907, the upper front lantern was moved to a position 22 ½ feet to the eastward of the old position, and reestablished on a new concrete foundation. The old wooden bulkhead was removed. Minor repairs were made.

For a larger map of Horseshoe Range West Group Lighthouse, click the lighthouse in the above map.