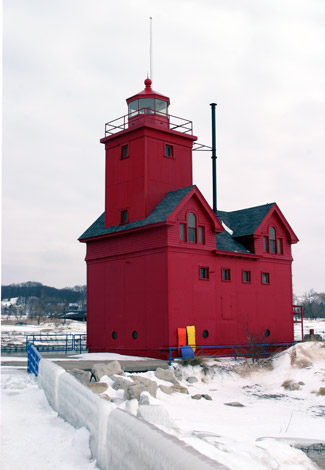 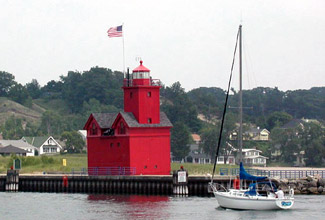 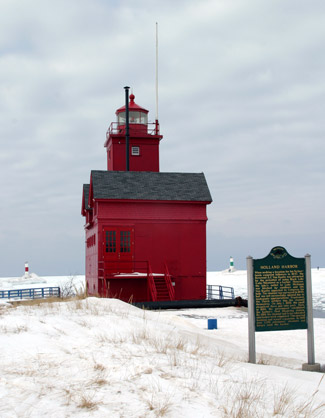 Spurred by religious oppression, Reverend Albertus C. Van Raalte led a group of sixty Dutch Calvinist separatists in 1846 from the Netherlands to America. The settlers made their way to New York and then struck out for Wisconsin, but an early winter forced a layover in Detroit. There they learned about lands available in western Michigan, and Van Raalte eventually selected the banks of Black Lake, now known as Lake Macatawa, as their new home.

Though Holland is known today for its lovely setting on Lake Michigan and its annual tulip festival that features over six million tulips, in 1847, the area consisted of a swamp and an insect-infested forest. With much hard work and determination, the settlement took root, but early leaders realized that linking Black Lake to Lake Michigan was the key to their future. After vain attempts to secure government aid, Hollanders used their own picks and shovels to create the link, and on July 1, 1859, the small steamboat Huron was able to call at Holland.

The federal government made appropriations in 1886 and 1867 that totaled over $106,000 to improve the harbor at Holland. With these funds, cribwork was used to extend the north and south piers out into Lake Michigan and close-piling was employed to line the channel for several hundred feet eastward into Black Lake. On July 15, 1870, Congress provided $6,000 for a beacon at Holland, and later that year a light was established on the south pier. Melgert Van Regenmorter, who was one of the original settlers that arrived with Van Raalte and later served in the Civil War, was hired as the lights first keeper at an annual salary of $540. Keeper Regenmorter was forced to find his own housing for a few years as difficulties in obtaining title to the desired parcel delayed construction of the keepers dwelling until at least 1873.

The pierhead beacon consisted of a wooden tower, painted white, that had an enclosed upper portion topped by a lantern room. A fifth-order Fresnel lens was used to produce a fixed red light at a focal plane of thirty-two feet that could be seen by mariners for up to eleven-and-a-half miles. During 1871, over 400 vessels cleared Holland carrying 34,861 tons of cargo that included 26,809 railroad ties, 23,275 pounds of barley, 5,490 bushels of potatoes, 17, 998 pounds of butter, and 8,540 dozen eggs.

In 1875, a section of elevated walk, 550 feet in length, was built to link the pierhead lighthouse with an additional 450 feet of plank walk that had been laid atop the cribs. Five years later, the lighthouse was moved 264 feet lakeward and the elevated walk was extended this distance.

On May 26, 1890, a post light was established at the outer end of the extended south pier to form, with the main light, a range for entering the harbor. Later that year, the scow Breakaway carried away the post light while attempting to enter the harbor during a northwest gale. While leaving the harbor in 1892, the schooner R. Ranters broke three legs of the elevated walk along with a section of its stringers and railings.

In 1901, a lantern carriage and wire rope were put in place so the keeper could run the lantern light out to the post on the pierhead from the main light. This improvement had a short life as on January 4, 1902, the post light was replaced with a square, pyramidal steel structure, similar in form to the original wooden lighthouse but taller, to serve as the harbors main light. This new tower displayed a fifth-order fixed red light and had a focal plane of forty-five feet. An elevated metal walk replaced a 217-foot portion of the old wooden walkway at the same time, and the stairs at the inner and outer ends of the walk were renewed.

On December 22, 1904, a gale damaged the crib beneath the metal tower, forcing the light to be discontinued. The tower was dismantled and stored, and then erected on a temporary wooden foundation the next spring.

A lens lantern was established atop a post 400 feet behind the metal pierhead tower on November 4, 1905 to form a range. The following April, the post light was replaced with a metal, skeletal tower that had a focal plane of sixty-one feet.

Starting in 1900, the Lighthouse Board requested funds for a fog signal at Holland, noting that it served as a port of entry for Grand Rapids and had substantial passenger and freight business during the navigation season. Work on this structure finally commenced in 1907, using money that had initially been appropriated for a lighthouse at South Milwaukee, Michigan. The metal fog signal building, which was built directly behind the metal pierhead tower, measured twenty-two by thirty-six feet. A ten-inch steam whistle, built in 1899 by George F. Motter & Sons of York, Pennsylvania and that had been discontinued at Calumet, Illinois, was installed in the first floor of the new building. An apartment for two assistant keepers was built in the upper story of the fog signal building, which had a pair of gables on each side, and a covered passageway that connected the apartment to the pierhead tower. A fourth-order lens was installed in the tower in 1907, increasing its range to thirteen miles.

Sixty-nine-year-old Keeper Van Regenmorter was still serving as keeper during the construction of the fog signal building, but he apparently decided to end his thirty-seven years of service rather than learn to run the new equipment. Charles Bavry was transferred to Holland Harbor from Pilot Island, Wisconsin to replace Van Regenmorter, and two assistants were assigned to the station to help with the added work required by the fog signal.

In 1908, a small steel tower was erected at the end of the south pier to range with the primary light. The two pier lights were electrified in 1932, and the following year an air whistle replaced the old steam fog whistle. A square tower was erected between the western pair of gables on the fog signal building in 1936, and the metal pierhead tower was shipper to Calumet, where it is still in service on the south end of the breakwater.

Joseph Boshka was transferred from his role as head keeper at Plum Island in Wisconsin to take charge of Holland Harbor Lighthouse in 1911. Keeper Boshka began his career as a lighthouse keeper in 1898 as second assistant at Seul Choix Point Lighthouse. After just five months, Boshka was promoted to first assistant at Seul Choix Point, and then in 1902, he was transferred to Menominee, where he served as assistant until be promoted to head keeper of Plum Island in 1907.

Henry Rocheleau served as second assistant at Holland Harbor from 1917 to 1922, and then was assigned to South Manitou Island Lighthouse for a few years before returning to Holland Harbor as first assistant in 1925. In 1919, Keeper Rocheleau was recognized for rescuing two persons from a capsized canoe and taking them ashore.

The formerly buff-colored Holland Harbor Lighthouse was sandblasted and given a coat of red paint in 1956, which lead to its being affectionately called Big Red by local residents. When the Coast Guard announced plans to abandon the lighthouse in 1970, citizens of Holland signed petitions and wrote letters to save their beloved landmark. This effort prompted the following reply by J. Natwig, Chief of Staff of the Ninth Coast Guard District: Based upon numerous letters from the citizens of Holland, Michigan, we have recognized the South Pierhead Light Structure to be an aesthetic landmark. Plans for the improvement of the aids to navigation system at Holland have been revised to provide for the continued maintenance of this structure by the U.S. Coast Guard. I trust this information relieves any doubts you may have had for the future of the South Pierhead Light. Holland Harbor Lighthouse Historical Commission was formed in 1974 to preserve and restore the structure.

Two modern D9 cylindrical towers now mark the ends of the breakwaters that extend out into the lake beyond the lighthouse. The Fresnel lens used in the lighthouse is on display at the Holland Museum. (Please note that taking pictures inside the museum is prohibited.)

In 2005, Holland Harbor Lighthouse, deemed excess by the Coast Guard, was offered at no cost to eligible entities, including federal, state, and local agencies, non-profit corporations, and educational organizations under the provisions of the National Historic Lighthouse Preservation Act of 2000. After the review process, the National Park Service transferred the lighthouse to Holland Harbor Lighthouse Historical Commission in February 2007.

In 2012, people were complaining that Big Red was looking more like Big Pink. The Historical Commission typically paints the lighthouse every ten years, but for some reason the 2009 paint job faded faster than normal. The Commission didnt have the $20,000 to apply a new coat of paint, but Lamar Construction generously stepped in to paint the historic structure for free with materials donated by Repcolite Paints.

For a larger map of Holland Harbor Lighthouse, click the lighthouse in the above map.

From Interstate 196 take the I-196 Business Route from either Exit 44 or 55 and drive into Holland. If you took Exit 44, the business route will become River Avenue. If you took Exit 55, turn right onto River Avenue in Holland. From River Avenue, turn left onto Douglas Avenue. Douglas Avenue will become Ottawa Beach Road which will take you to Holland State Park on the shore of Lake Michigan. From the park, you can get a good view of Big Red, which is located on the opposite side of the entrance to Lake Macatawa.

It is possible to get closer to Holland Harbor Lighthouse by a visit to the south side of the lake entrance, however, that area is mainly private property, and although limited public access is permitted, a lengthy walk is required to reach the lighthouse. In 2014, summer access to the lighthouse from the south side was limited to weekdays for out-of-state visitors and just Tuesdays and Thursdays for locals. These visits are permitted between 11 a.m. and sunset, from Memorial Day to Labor Day.

The Fresnel lens used in the lighthouse is on display at Holland Museum.