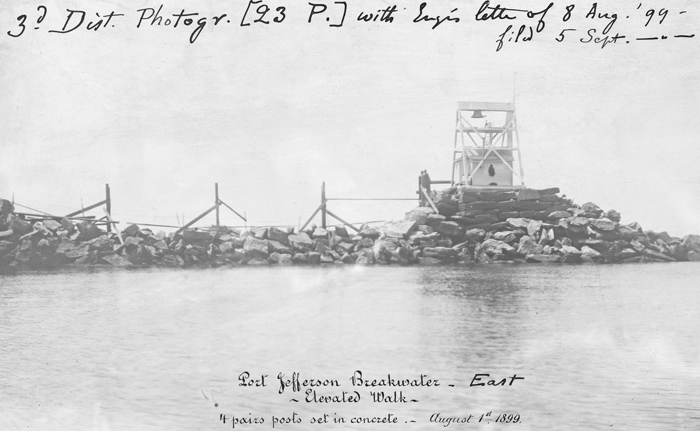 1896  Port Jefferson Harbor, New York.The east breakwater light and fog-bell signal pier was completed. A bell tower was erected and the small house built to protect the fog-signal apparatus was nearly completed. Some 900 tons of riprap were delivered for the protection of the site. On August 10, 1896, this station is to go into operation. The west beacon light concrete pier was completed and the post was erected June 30, 1896. On August 10, 1896, the light was shown for the first time.

1897  Port Jefferson East Breakwater Beacon, New York.The station was completed and a fixed red lantern light and fog signal were established August 10, 1896, on a structure erected on the northerly end of the east breakwater entrance to the harbor of Port Jefferson, south side of Long Island Sound. The fog-bell signal consists of a 1,261-pound bell, struck by machinery a double blow every 30 seconds. The frame of the bell was strengthened. The door on the north side of the tower was closed and one was built on the south side with a vestibule and storm door. Some 240 tons of riprap were furnished and placed for the protection of the pier.

1897  Port Jefferson West Beacon, New York.This station was completed and a fixed white lantern light was established August 10,1896, on the structure erected on the point of the beach on the westerly side of the entrance to the harbor of Port Jefferson, south side of Long Island Sound.

1898  Port Jefferson East Breakwater Beacon, New York  Some 300 tons of riprap were furnished and placed for the protection of the foundation.

1900  Port Jefferson, east breakwater, beacon, New York.An elevated walk was built on the breakwater for the convenience of the keeper. The fog-signal apparatus was overhauled and repaired. A lens lantern was substituted for the post lantern. Minor repairs were made.

1901  Port Jefferson East Breakwater Beacon, New York.On July 25, 1900, the color of the light was changed from red to white, its intensity increased by changing from a pressed glass to a lens lantern, and the height of the focal plane above mean high water was reduced to 30 feet. Various repairs were made.

1902  Port Jefferson East Breakwater beacon, New YorkMaterial was prepared for repairs to the beacon, and concrete was placed on the east side of the foundation to replace that damaged by the November storm. A small platform was built on top of the bell frame for the lens lantern, and a 360-degree five-day lens lantern was placed. Various repairs were made.

1906  Port Jefferson East Breakwater beacon, New York.On November 16, 1905, the structure supporting this light was burned, and a temporary light was established pending the rebuilding of the structure. It was completed on December 9, 1905, and was similar to the old one excepting that light was 28 feet instead of 30 feet above the water.

For a larger map of Port Jefferson Breakwater Lighthouse, click the lighthouse in the above map.