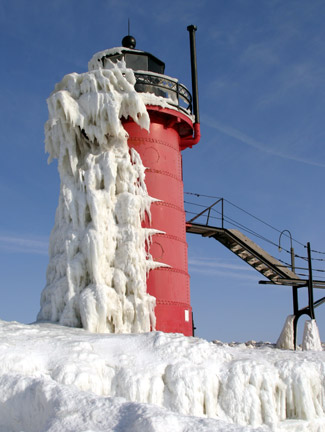 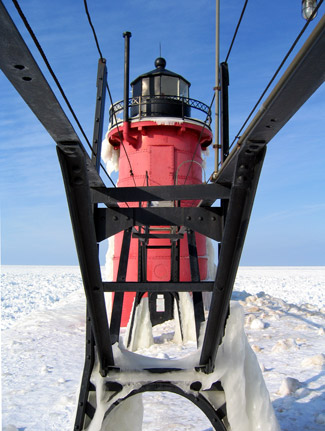 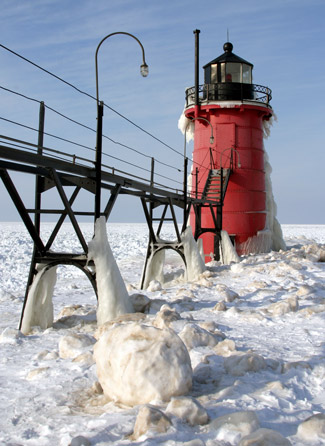 In August 1838, Lieutenant James T. Homans of the U.S. Navy inspected existing lighthouses on the western great lakes and examined proposed sites for new lighthouses. Upon visiting Black River on the eastern shore of Lake Michigan, Lt. Homans noted that the stream was navigable for six miles and that pine, hemlock, and oak abounded along its banks. Large steam sawmills had been erected to prepare timber for market, but there was one major problem, evidenced by a fine schooner stranded upstream by the formation of a bar at the rivers mouth. Homans recommended that two parallel piers be constructed at the rivers mouth to confine its current and help maintain a deep channel. It took a few decades, but by 1868, piers bracketed the entrance to the river and private enterprise was maintaining a beacon light on the south pier. South Haven had nearly doubled in size between 1867 and 1868, and as soon as land was cleared for its timber, it was planted with peach and apple trees or blueberries.

Using a $6,000 appropriation, the Lighthouse Board completed a dwelling and pierhead tower at South Haven in 1872. A 0.69-acre parcel on a bluff overlooking the river was purchased from Marvin and Merta Hannahs for $600 and used as the site for a two-story frame keepers dwelling with seven rooms and a bath. A square, wooden, pyramidal tower was built on the pierhead, and an octagonal cast-iron lantern was mounted atop the towers enclosed upper portion. A fixed red light, produced by a fifth-order, Barbier and Fenestre Fresnel lens, was displayed from the tower for the first time on May 10, 1872.

In 1888, the beacon was moved 120 feet lakeward, and a combination gas-machine was placed inside the tower to supply gas for the light. A Welsbach burner was added to the gasoline light in 1890, reducing the consumption of gas by one-half while doubling the power of the light.

The tower was moved another 249 feet lakeward in 1901, after the pier had been extended, and the elevated walkway, which allowed the keeper to reach the light when the outer portion of the pier was covered in ice, was extended the same distance.

Plans for a metal tower to replace the old wooden one were prepared in 1902, and in October of the following year, a ten-man crew arrived aboard the USLHS tender Hyacinth to erect the cylindrical tower and remove the wooden one. The circular tower has a diameter of eleven feet, six inches at its base, and tapers to ten feet at its nine-sided lantern room. The tower stands just over thirty-six feet tall, and consists of steel plates covering metal lath. Originally painted white, the tower was equipped with six porthole windows to light its interior and has two doors, one at ground level and an upper one that can be accessed by the catwalk. The light in the metal tower was first exhibited on November 13, 1903.

Captain William P. Bryans two years as the first keeper of South Haven Lighthouse was the shortest tenure of any of the lights keepers. James S. Donahue, the second keeper, watched over the light for thirty-five years, longer than any other keeper, and dutifully recorded daily occurrences in the stations log. The following are two entries that show his matter-of-fact style:

Most of Donahues left leg had to be amputated after he was struck by a minie ball at the Civil War Battle of Wilderness in 1864, but that didnt prevent him from faithfully attending the pierhead light. To help him reach the tower safely, Donahue built a 300-foot-long handrail in 1880 that lead out to the piers elevated walkway.

In times of fog, mist, or snow, the keeper was obliged to remain in the tower and signal mariners using a hand-operated, bellows-style horn. On May 5, 1881, Keeper Donahue noted the following in the stations log: I went to the village councal one hour in the evening. My wife and brother was at the end of the pier blowing the foghorn and braut in the Steam Tug Mirands at eight thurty PM.

Keeper Donahues service was longer than that of the original wooden tower, and when the metal tower was installed in 1903, Donahue erected the old one in his yard to preserve it as a relic.

The hand-operated horn was replaced on September 18, 1913 by a 1,200-pound bell, sounded by an electrical striking apparatus. In 1916, a fifty-foot, white, skeletal tower was placed 267 yards shoreward of the pierhead light to form a range to assist mariners in entering the harbor. The characteristic of both of the range lights was fixed red. The inner range light was removed from the pier sometime after 1960.

In 1923, the illuminant for the South Haven Range Lights was changed from oil to electric, and at that time, two electric flood lights were installed on the outer tower, just below the lantern room, to illuminate a triangular, pyramidal daymark located on the north pier. Mariners remarked that the floodlights were helpful in defining the entrance between the piers, which had a width of 165 feet.

On March 25, 1937, an air diaphone, sounding a group of two blasts every thirty seconds, replaced the towers fog bell. A light was established on the outer end of the north pier in 1949.

The elevated metal walkway that leads to the tower was relocated from Calumet Lighthouse in Illinois and installed on the pier in 1925. In 1989, the South Haven Lighthouse and Catwalk Preservation Committee launched fundraising efforts to preserve the tower and catwalk that were threatened by budget cuts. The groups goal was to raise $60,000 for the catwalk, of which $33,000 would be used to restore the structure and add lighting, and the remaining $27,000 would be held in a trust for perpetual maintenance. The catwalk is owned by the Corps of Engineers and licensed to the City of South Haven, who also pays the electric bills for lighting the catwalk. In 2003, the Michigan Maritime Museum assumed stewardship of the catwalk by accepting the funds raised by the preservation committee.

The historic keepers dwelling in South Haven now serves as the Marialyce Canonie Great Lakes Research Library of the Michigan Maritime Museum, and a good view of the pier light can be had from the street near the dwelling.

A Notice of Availability, dated June 28, 2010, announced that South Haven South Pierhead Light was excess to the needs of the United States Coast Guard and would be made available at no cost to eligible entities defined as Federal agencies, state and local agencies, non-profit corporations, educational agencies, or community development organizations for educational, park, recreational, cultural or historic preservation purposes. Qualifying organizations were given sixty days to submit a letter of interest.

Michigans lighthouses have long been an unmistakable marker of Michigans identity, noted Senator Levin. Although they are no longer used as navigation tools, they are a testament to our states maritime history and important sources of tourism. Under the care of these local historical societies, these three lighthouses will be enjoyed by generations of future Michiganians and visitors.

To help fund restoration of South Haven Lighthouse, the historical association launched a Save the Light fundraising campaign in 2015 that brought in over $300,000 through corporate donations, individual donations, and t-shirt sales. The group also sold personalized commemorative bricks that were incorporated into a walkway near the pier. In 2015-2016, Mihm Enterprises of Hamilton, Michigan restored the interior of the lighthouse. Steel lathe and plaster was removed, deteriorated parts were replaced, new glass was placed in the lantern room, and the interior was sandblasted before being painted. When the interior was finished, a matching $60,000 grant from Michigan Lighthouse Assistance Program was used to restore and paint the towers exterior.

For a larger map of South Haven South Pier Lighthouse, click the lighthouse in the above map.

The lighthouse is owned by the Historical Association of South Haven. Grounds open, tower closed.