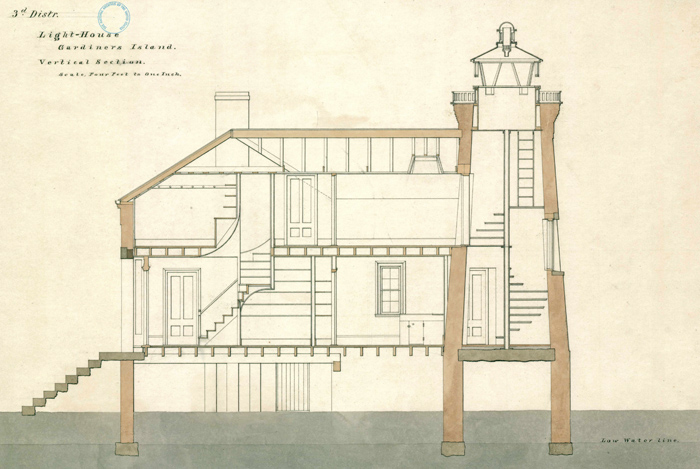 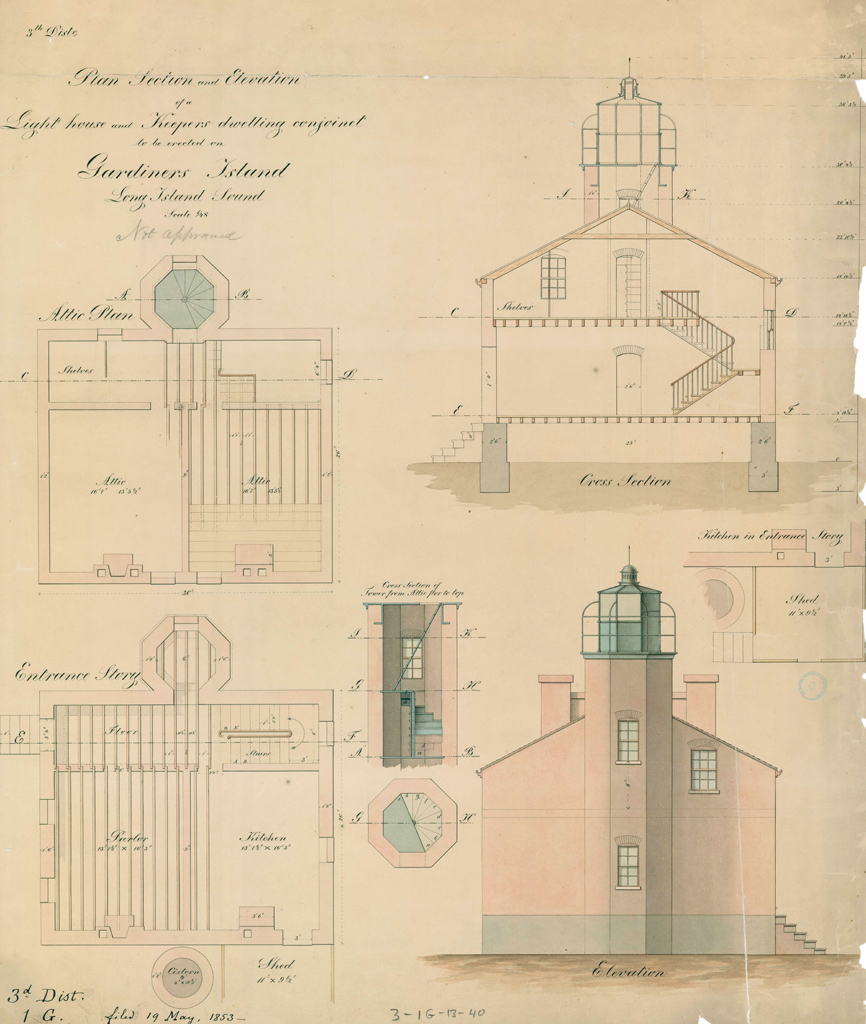 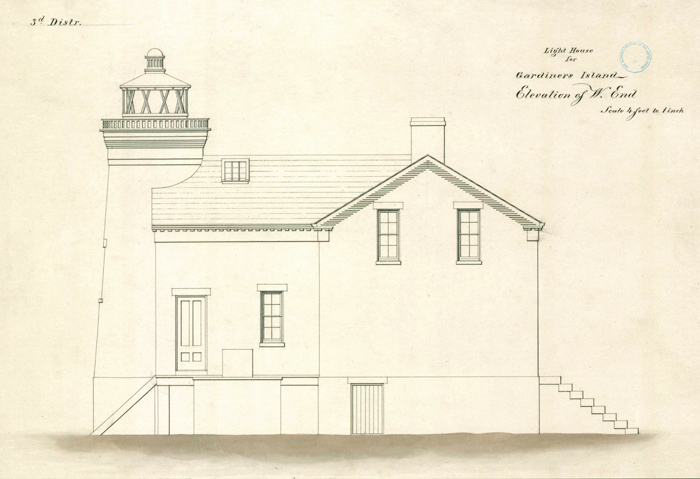 1838  A light-house on the northwest point of Gardiner's island, Suffolk county, Long island. Gardiner's island forms the eastern shore of the bay of the same name, which lies near the northeastern end of Long island, and to the southward of Plum and the Gull islands; its northern end is the termination of a low sandy beach, from 300 to 500 feet in breadth, which extends three miles into the bay, in a northwesterly direction.
At its north point there is six fathoms water close to the beach; and to the westward three fathoms water is found at a distance of 100 feet from the shore; but a shoal extends out to the eastward, upon which vessels coming from that direction, and not knowing their danger, are liable to run.
The lights on the Gull and Plum islands (the former bearing N. 31° E., distant 34 miles, and the latter bearing N. 52° W.) are at present the best guides in running for this point, which, owing to the lowness of the land, is impossible to be distinguished at night at any distance.
In order to determine the degree of danger attending the navigation in this quarter, I have endeavored to ascertain the number of vessels stranded upon Gardiner's point, and the circumstances under which they came on shore. With this view, access has been had to the depositions of witnesses in a cause pending in the court of common pleas, county of Suffolk, Massachusetts, which relates to the brig Malaga, stranded on this point in July, 1836. The evidence, as far as it relates to the subject under consideration, is annexed.(1) It appears from it, that in a period of sixteen years upwards of twelve vessels have stranded upon this part of Gardiner's island. The circumstances under which some of these disasters occurred, were such that a light would not have averted them; but I have been informed that, among others, the five sloops of Riverhead would have received from it a timely warning of their danger.
The amount of trade belonging to the ports in the neighborhood of this point is shown by the annexed document, (2 ;) as it is passed by their vessels and by others seeking shelter in Gardiner's bay, and as a light would contribute much to their convenience as well as safety, I would respectfully recommend its establishment.
(1.)Lewis Edwards, Esq., of Easthampton, Long island, states " that he lived on Gardiner's island about sixteen years, and that, during that time, several vessels went on shore on the northeast part of Gardiner's island; that the first vessel which he knew to go on shore was the Gladiator, of New London, Captain Manning. She went on in a violent storm in the month of February. The next were two sloops from New London, which came on shore in March, during a violent snow-storm." He does not recollect the names of the vessels; the year when they came on; nor does he know the names of the owners. The next were five sloops, belonging to Riverhead; the names were, the Fanny, the Ocean, and the Ann Mariathe names of the other two he does not recollect. They came on shore in the month of May, all at one time, in a violent storm. That the owners of said sloops belonged to, or in the vicinity of Riverhead; their names he cannot state. The brig Sylvester, Healy, was stranded in the month of December, about ten years ago last December; he thinks, at the time, the wind was easterly, and the weather foggy; her captain's name was Gardiner. The sloop Regulator, of East Haddam, Connecticut, went on ashore near the foot of the beach, in the month of November; cannot say what year; commanded by Captain Wheeler, and he thinks he was the owner. The sloop Canton Crape, of Newport, Captain Godfrey, master; the owner's name was Alley, of Newport. It was in the month of November; cannot say what year; it was a hard storm; her sails were torn to pieces, and she would not keep off. That he has known several other small vessels to go on shore there, but their names he does not recollect. (2.)The number of vessels, with their tonnage, employed in the coasting trade and cod fisheries, out of the district of Sag Harbor, are owned follows:
Vessels. Tons and 95ths.
Sag Harbor 20 1,100 37
Southold 44 1,1973 14
Riverhead 11 539 87
Greenport 10 514 06
Jamesport 9 413 77
Southampton 14 540 44
Easthampton 2 68 91
The number of vessels employed in the whale fishery, and registered in the district of Sag Harbor, are as follows:
Ships Tons
Sag Harbor 29 9,797
Greenport 4 997
Jamesport 1 236
There are three ships whaling from Greenport, owned principally iii .New York, and registered there; they are not included in this statement.

1853  The site for the light house authorized to be placed on the north point of Gardiner's island has been obtained, with the cession of State jurisdiction, and approved plans and estimates have been submitted, and the work will be commenced at the earliest practicable moment.

1853  It is probably too late to commence the construction of the beacon at Plum gut, or the light-house at Gardiners Island. The importance of these structures require their completion at the earliest time practicable.

1855  Light-house on Gardiner's island.This structure is located at the extremity of a low, sandy beach, about three miles long, projecting to the northward from the above island, and elevated about three feet above high water. The building is composed of a keeper's house twenty-eight feet square, of one and a half stories in height, with a cellar, and is connected with a circular tower at the northern extremity nine feet diameter, surmounted by a lantern, intended to contain a Fresnel lens of the 5th order.
The plan was furnished by the Light-house Board, and the buildings have been constructed in the most substantial manner, of hardburned bricks laid in cement, with slate roof, and cast-iron lantern. Connected with the building is a cistern, six feet diameter and seven feet deep, and a small frame wash-room ten by twelve feet. The focal plane of the lantern is elevated thirty feet above low water.
This light-house was completed and ready for lighting in December last.

1868  Gardiner's island.This station is in good condition, and requires nothing at present. < p>1869  Gardners Island.No repairs have been needed at this station. A new stove for warming the tower has been furnished. It is proposed to make some alterations in the lantern and to place a fog-bell during the next year at this station. The fog-bell at present in use at the Little Gull Island station will be available for this purpose.

1870  Gardiner's Island, Long Island Sound.The alterations in the lantern required at this station and for which an appropriation was made July 15, 1870, are progressing, and will be completed during this season. A fog bell will be placed at this station before winter.

1871  Gardiner's Island, Long Island Sound.The necessary alterations in the lantern, and the painting of the tower and keeper's dwelling, inside and out are completed.

1893  Gardiners Island, New York.A survey of a portion of the island was made to determine the advisability of either moving the old light and dwelling or rebuilding farther from the high-water line, which is approaching the station from the east at the rate of 10 ? feet per year for the past three years.

1894  Gardiners Island, Long Island Sound, New York.A new boathouse and boatways were built, and some other minor repairs were made. This station was abandoned March 8, 1894, on account of the encroachment of the sea. A gas-lighted buoy was, on May 31,1894, moored in about 72 feet of water about a quarter of a mile N. by E. from Gardiners Island discontinued light house. The buoy is painted black, lettered G I in white, and shows a fixed white light.

1898  Gardiners Island gas buoy, Gardiners Island, New York  By authority of the Secretary of the Treasury, dated April 5, 1898, the abandoned light-house reservation at this point was transferred to the War Department for the erection of a battery.

For a larger map of Gardiners Island Lighthouse, click the lighthouse in the above map.