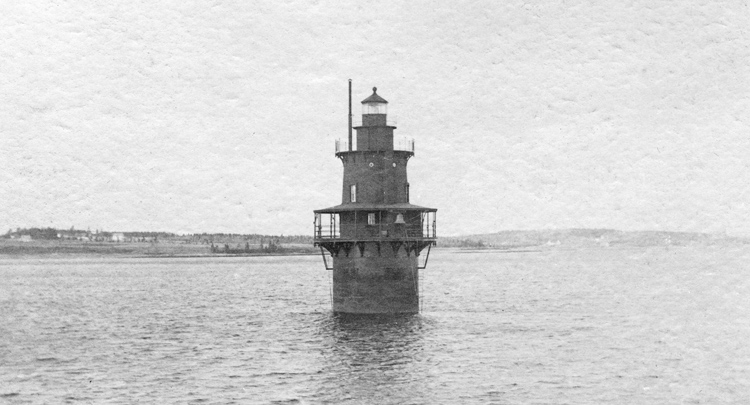 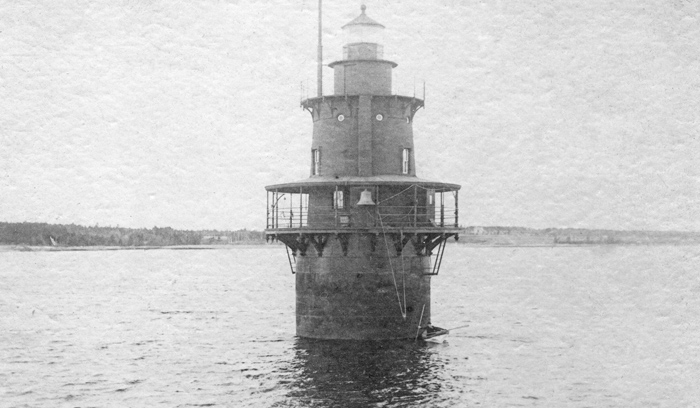 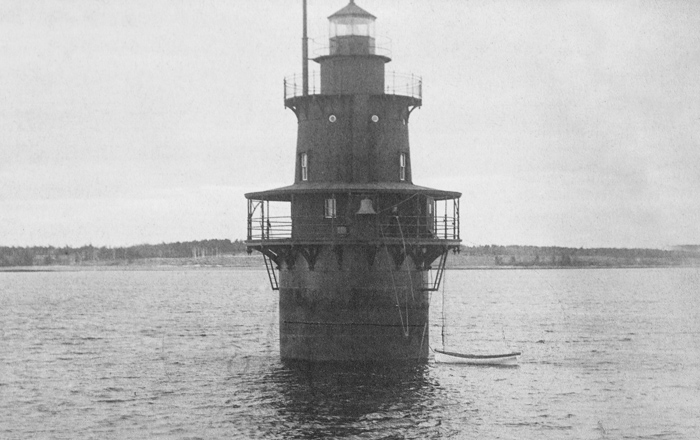 1887  Crabtree Ledge, in Frenchman's Bay, Maine.This ledge, upon which there are from 8 to 12 feet of water at mean low tide, was surveyed, title to the site, with jurisdiction, was secured from the state of Maine, and drawings, specifications, and estimates for the lighthouse were prepared.

1889  Crabtree Ledge, about 1 ½ miles south of Mount Desert Ferry, Maine. Contracts were made for the metal work, for the cement, and for the erection of the light-house. Part of the metal work and of the cement were delivered at Mount Desert Ferry. The location of the foundation cylinder was fixed upon the ledge, and the building of a crib-pier around it was commenced.

1890  Crabtree's Ledge, between Bar Harbor and Mount Desert Ferry, Frenchman's Bay, Maine.The light-house recently constructed consists of a cylindrical iron caisson, 25 feet in diameter and 32 feet in height, founded upon a rock 15 feet below mean sea-level. It is filled with concrete and surmounted by an iron tower, 37 feet high from base to focal plane, and was finished December 31, 1889. A fixed white light of the fifth order, varied by a white flash every two minutes, illuminates the whole horizon, and was first exhibited on January 15, 1890.

1891  Crabtree Ledge, between Bar Harbor and Mount Desert Ferry, Frenchman Bay, Maine.A 1,200-pound bell, struck by machinery, with a bell house of sheet iron, was placed upon the pier. Various minor repairs were made.

1895  Crabtree Ledge, Frenchman Bay, Maine.A landing ladder was made and fitted. Various repairs were made.

1903  Crabtree Ledge, on Crabtree Ledge, Frenchman Bay, Maine. The color of the tower was changed from brown to white, and the revolving clock and fog-bell machinery repaired.

1916  October 2. Assistant Keeper Chester Brinkworth, 31, and his brother Charles [Arthur Leon], 27 [20], were drowned Saturday near Crabtree Ledge Lighthouse at the entrance to Sullivan Harbor, according to information received here today at the Lighthouse Department. Capt. Sherman went with the lighthouse tender Hibiscus to search for the bodies.
Charles Brinkworth fell from a dory, and his brother sprang overboard to rescue him, both perishing. Jerome C. Peaslee, keeper of the light, was ill, and his assistant, Chester Brinkworth, had gone ashore to bring back his brother as helper. The two were lost on the return trip.
Chester Brinkworths body and the capsized dory were found by the Hibiscus, which is searching for the body of Chesters brother. The latter has left his home at Hancock Point in the face of a heavy wind and high seas. Friends advised against his making the trip, but young Brinkworrh said that, with the keeper in a hospital, his brother would be lonely.

For a larger map of Crabtree Ledge Lighthouse, click the lighthouse in the above map.