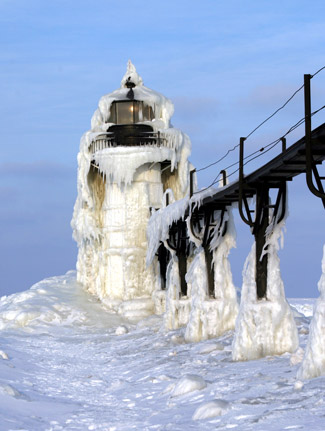 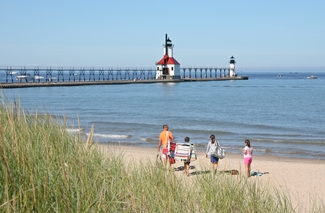 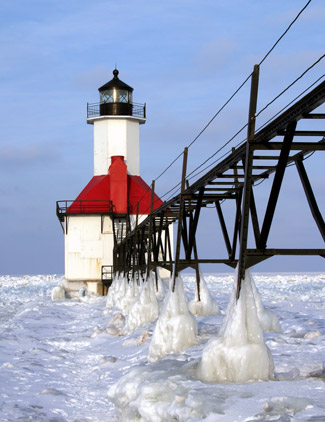 Calvin Britain arrived at the mouth of St. Joseph River in 1829 and shortly thereafter platted the village of Newburyport, whose name would be changed to St. Joseph when the village was incorporated in 1834. Situated across Lake Michigan from Chicago, St. Joseph received its first lighthouse in 1832, just months after the first lighthouse on Lake Michigan commenced operation at Chicago. St. Josephs first lighthouse consisted of a conical, rubblestone tower topped by a four-inch-thick soapstone deck and an octagonal lantern room. A single-story stone dwelling was built nearby for the keeper of the light. John Scott was awarded a $2,700 contract for constructing the tower and dwelling, and Winslow Lewis received $500 for installing eleven of his patent lamps and fourteen-inch reflectors. Congress had appropriated $5,000 for the light on March 3, 1831.

Work on constructing piers to facilitate entering St. Joseph River from Lake Michigan began in 1836, and by 1844, the total amount spent on the project was $121,113. The river could be navigated for about sixty miles upstream, where there was an abundance of land whose produce could be exported to other regions of the country. Planners boasted that St. Joseph would become an important place, probably second only to Chicago, on this lake. By 1848, a beacon light had been established on the pier, and the number of lamps in the main light had been reduced to just four.

St. Josephs stone lighthouse was replaced in 1859 with a two-story, frame keepers dwelling with a square tower rising from one end of its peaked roof. The light was roughly forty-eight feet above the ground, but the bluff on which it stood gave it a focal plane of 101 feet above lake level. The color of the light was changed from white to red in 1864 so it could be distinguished from other lights in the vicinity.

On July 15, 1870, Congress appropriated $3,000 for a new pierhead beacon, which was built later that year on the south pier along with an elevated walkway. An assistant keeper was assigned to the station in 1876 to help with the task of maintaining two lights. In 1881, the pierhead beacon was transferred to the outer end of the north pier, and its light was changed from fixed white to fixed red. A new open-frame tower, which was fifteen-and-a-half feet taller than the previous pierhead beacon, was built on the north pier in 1885, and upon the opening of navigation in 1886, it began displaying a fixed white light from a fourth-order lens. This light was deemed sufficient for the harbor, and the 1859 lighthouse was discontinued on March 18, 1886. On November 1, 1887, a 1,500-pound fog bell, struck by a Stevens striking apparatus, was added to the pierhead tower.

The 1859 lighthouse was re-established on July 10, 1889, and later that year a conduit light was added to the pier to form range lights for entering the river. The front light consisted of a post near the end of the pier to the top of which was connected a 290-foot-long conduit that was used to run a light out to the post from the protection of the pierhead tower. A fifth-order lens replaced the fourth-order lens used in the pierhead tower in 1899, and it is likely that the fourth-order lens was installed in the 1859 lighthouse. The characteristic of the 1859 lighthouse was fixed white with a flash every ninety seconds, with the flashes being produced by a panel that revolved around the fixed Henry-Lepaute lens. In 1892, the frequency of the flashes was increased to one every forty-five seconds through the addition of another flash panel. The frequency of the flashes was increased again in 1901 to a white flash every thirty seconds.

On June 11, 1896, after years of petitioning by the Lighthouse Board, Congress appropriated $5,000 for a steam fog signal to replace the bell, which was often ineffective. A well for the steam fog signal was created in the crib by removing stone from one pocket and placing therein a plank box. After the needed boilers, engines, and pumps had been installed in the new fog signal building on the pier, a ten-inch steam whistle was established on February 1, 1897, with a parabolic deflector constructed behind the whistle to focus the sound lakeward. To help with the extra workload created by the steam fog signal, a second assistant keeper was added to the station. The conduit light was discontinued at this time as the beacon and fog signal had been moved to the end of the pier, but a pole light was established 400 feet shoreward to serve as a new rear light for the piers range lights.

After the War Department had extended the north pier, the range lights and steam whistle were relocated 1,000 feet lakeward in 1904. The present set of range lights on the north pier was constructed in 1907. The front tower consists of steel framing covered with metal sheets and tapers from a diameter of eight feet, three inches at its base to seven feet, three inches at its nine-sided lantern room. The tower was originally equipped with a fifth-order Barbier and Benard lens that produced a fixed red light.

The rear tower consists of a twenty-four-foot-square steel structure whose pyramidal roof is surmounted by an octagonal tower and circular lantern room with helical bars. A fourth-order lens manufactured by Chance Brothers was installed in the lantern rom to produce a fixed red light. The piers original ten-inch steam whistle, constructed by J. P. McGuire of Cleveland, Ohio, was transferred to the lower portion of the new structure. A diaphone fog signal was installed in the rear tower in 1933.

In 1908, a duplex, with seven rooms in each of its two apartments, was constructed at the inner end of the north pier for the keepers. The 1859 lighthouse remained in operation until 1919, when an acetylene light was established atop a red, skeletal tower on the south pier. No longer needed, the lighthouse was sold to the City of St. Joseph in 1936. Over the years, the structure housed offices for the American Red Cross, the American Cancer Society, and the Society for Crippled children, but in 1955 local preservationists lost their battle to preserve the historic lighthouse, and it was razed to make room for a parking lot. Owen C. McCauley, who was in charge of the pierhead lights from 1931 to 1936, was one of those who tried to save the lighthouse. That station should not be torn down, said McCauley. It should be kept up for a souvenir, if for nothing else.

Daniel R. Platt had the longest tenure as a keeper at St. Joseph. He began his service in 1883 as head keeper of the mainland and pierhead lights and served until the mainland was deactivated permanently in 1919. When the current pier range lights were established in 1907, a head keeper and two assistants were assigned to them while Platt remained in charge of just the mainland light.

A Lighthouse Depot for the ninth district of the United States Lighthouse Service was built alongside the river in 1893. After a depot was built in Milwaukee, the one at St. Joseph became less important and was transferred to the Navy in 1918. The depot buildings were home to the Lighthouse Depot Brewpub and Restaurant from 1997 to 2001, but now belong to the Saint Joseph River Yacht Club.

In May 2008, the St. Joseph Pierhead and Inner Lights, deemed excess by the Coast Guard, were offered at no cost to eligible entities, including federal, state and local agencies, non-profit corporations, educational agencies, or community development organizations. The City of St. Joseph was the only entity to submit an application, and after reviewing it, the National Park Service requested more information on how the city would share stewardship of the lights with the Heritage Museum and Cultural Center and during what time the lights would be open to the public. A more complete application was returned to the National Park Service in April 2009, and a formal ceremony celebrating the transfer of the lighthouses to the city was held on October 7, 2013.

One of the reasons the City stepped forward is because our area has already lost much of our lighthouse history, said Bob Judd, a former may of St. Joseph. The original 1832 lighthouse, the 1859 lighthouse that once stood on the bluff, along with the South Pier lights, are gone forever. We almost lost the catwalk until a grassroots effort in the 1980s saved it. We cannot lose our current lighthouses. We need to save them for future generations to enjoy.

In August 2008, a historical architect assessed the inner and outer lighthouse structures, at a cost of $17,000, and concluded that $1 million in repairs would be necessary before public access to the lights could be permitted. The inner light required more attention as part of its ceiling had collapsed.

A Lighthouse Forever Fund Committee was formed in 2014 to raised $2 million in private donations to fully restore the pier range lights and catwalk. After that, maintenance will be funded by the citys general fund tax revenues. By the end of 2014, the committee had raised $1.65 million, which allowed bids to be invited for the restoration work. Mihm Enterprises of Hamilton was selected to rehabilitate the lighthouses at a cost of just over $980,000, and the north pier was closed in June 2015 so work could get started. The restoration effort concluded in the spring of 2016, shortly after a replica of a smokestack that had been removed in 1949 was installed on the inner light. All the hard work in raising the funds and saving the lights was rewarded with a 2016 Governors Award for Historic Preservation.

The fourth-order Fresnel lens was removed from the inner light in 2012 and taken to the Heritage Museum Cultural Center in St. Joseph, where it was restored and placed on display along with the fifth-order lens used in the outer light that had been removed in 2005. The 1908 keepers duplex still stands near the end of the north pier.

The piers at St. Joseph and Grand Haven are the only ones on the Great Lakes that retain their range lights and catwalks. The St. Joseph Pier Lights were featured on a postage stamp issued in 1995.

For a larger map of St. Joseph Pier Lighthouse, click the lighthouse in the above map.

Near Benton Harbor on Interstate 94, take either I-94 Business Route into St. Joseph. From downtown St. Joseph, take Highway 63 over St. Joseph River. After crossing the river, turn left on Klock Road, which will become Upton Drive. Turn right onto Marina Drive and then left on Ridgeway Drive which will lead to Tiscornia Park, where you can park and walk to St. Joseph Lighthouses on the pier. A fourth-order and fifth-order Fresnel lens used in the towers are on display at Heritage Museum and Cultural Center in St. Joseph. Click here for a live webcam showing the lighthouse. Tours of the restored lights started in June 2016.

The lighthouse is owned by the City of St. Joseph. Grounds open, towers closed.