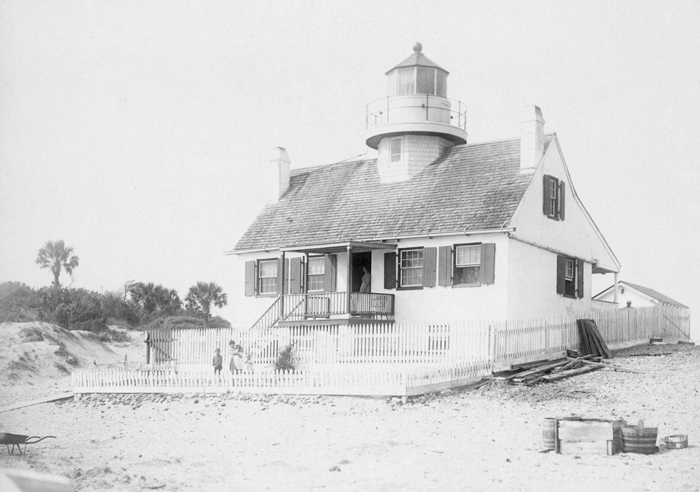 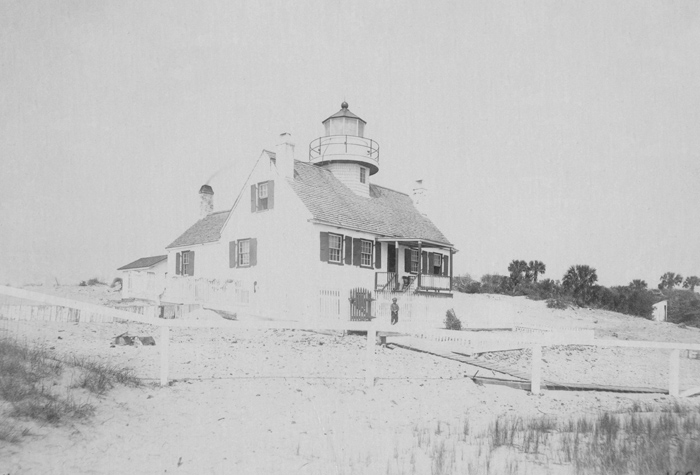 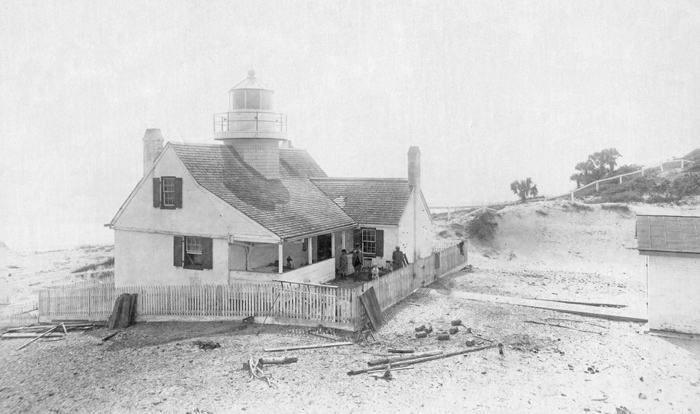 1867  Bull's bayHas not been re-established, as there are other works which, are considered of much more importance, and which have therefore been given precedence.

1868  Bulls bay.This station has been re-established, and the light was exhibited for the first time on the evening of August 31. A new lantern and apparatus have been placed; dwelling furnished with new inside doors, walls furred, lathed and plastered; outside walls repointed and cement-washed; roof repaired; wood-work painted; conductors furnished' to cistern and general renovation made; boat-house built and now boat with sails, &c, furnished.

1869  Bulls Bay, S. C.This station is in good condition; no repairs have been made during the year.

1875  Bull's Bay, north end of Bull's Island, South Carolina.This station has received extensive repairs. The roof of the building has been stripped off, defective rafters replaced, and then reshingled. The cistern has been repaired, and the building and the station put in good order.

1878  Bulls Bay, on Bulls Island, South Carolina.About 150 feet of the land in front of this station, composed of sand ridges, has been washed away and leveled down by the sea. There is, however, no present apprehension for the safety of the station.

1884  Bulls Bay, on north end of Bull's Island, South Carolina.A boat-house, 14 by 24 feet, supported on palmetto piles, was built, and also a substantial plank walk, 350 feet long and 7 feet high, to connect it with the high land. The station is in fairly good condition. Although the dwelling and tower are old, it is not proposed to make any repairs at present.

1886  Bull's Bay Light-Station.On the north end of Bull's Island 25 miles northeast of Charleston, S. C. The tower is 35 feet high. The keeper reports that the earthquake of August 31, commenced at 9.45 p. m. The house shook so that it jumped the lens off the pedestal. All the shocks came from the southwest; there was no wind. After this the shocks came every five minutes up to 2 o'clock ; then about every half hour up to 10 o'clock the next day. From that time they came four or five times a day. The shocks were not so sharp after September 15. The shocks were light. On the 21st a very heavy shock came, with a sound like a cannon at a long distance. It broke the chimney on the lamp.

1886  Bulls Bay, north end of Bull's Island, South Carolina.The dwelling, which supports the lantern, was being undermined by the action of the winds upon the shifting sand on which the house stands. The foundation was protected by a row of sheet-piles driven 10 feet from the gable end, and the intervals between the piles and house were covered with 2-inch plank. A workshop 10 by 18 feet in plan was built, and various minor repairs were made.

1887  Bulls Bay, north end of Bulls Island, northeast of Charleston, South Carolina.The earthquake of August did more damage to the dwelling and tower, which is but one structure at this station, than at any other in the district. The lens was thrown entirely out of position and the light extinguished for one nighta misfortune which occurred nowhere else. The walls were seriously cracked, those of the kitchen irreparably so, and the floors in some of the rooms so disjointed as to require renewal. The illuminating apparatus was restored without delay, and in March all the other injuries were repaired and the station was put in good order. For some years there were disputes between the light-keepers and the owner of the lands adjacent to the site as to their respective boundaries. In March a survey of the site established these boundaries and they were marked by four substantial concrete monuments.

1888  Bull's Bay, 25 miles northeast of Charleston, South Carolina.There is urgent need of a small light, here. It would be of much assistance in bad weather to the three steamers plying between Charleston and ports on the Sautee River, and to a large number of small craft which frequent these waters. All that is needed is a lens lantern suspended from a pole to be located on the wharf of the Bull's Bay Oyster Company. It is estimated that this light can be established for $60, as the company which owns the wharf will lease the site to the Government for a nominal consideration.

1889  Bulls Bay, 25 miles northeast of Charleston, South Carolina.The small light appropriated for at the last session of Congress will be placed on the Bull's Bay Oyster Company's wharf in July.

1890  Bulls Bay beacon, Bulls Bay, South Carolina.A beacon light was set up on the Bull's Bay Oyster Company's Wharf in July, 1889. It is in good condition.

1892  Bull Bay, north end of Bull Island, South Carolina.A new picket fence and a new plank platform were put around the keeper's dwelling. A fireproof brick oil-house was built; it is 9 by 11 feet in the clear, with ventilators and drain pipe, and shelves sufficient to receive four hundred and fifty 5-gallon oil cans.

1893  Bull Bay, north end of Bull Island, South Carolina .Funck-Heap lamps were substituted for Hains lamps, and a topographical survey was made of the site. The sea has in the past two years made rapid encroachments on this station, and if it continues two years more the light-house will be in great danger. The value of the structures does not warrant a large expenditure for the protection of the site; hence, in the event of continued erosion, it is proposed that a new site be purchased and a new light house erected rather than that an attempt be made to preserve the site.

1894  Bull Bay, north end of Bull Island, South Carolina.The foundation of the dwelling, injured by high water, was repaired and a wooden revetment, connected with sand fences, was built along its front, at a distance of 10 feet, for its further protection. The sea is making constant encroachments on the site, and strong protective work will be needed soon for its protection. 1896 - 634. Bull Bay, South Carolina.Although this station is in bad condition, repairs to it were confined to the necessary maintenance of the water supply by putting up new gutters and down-spouts. The reason for this course is that the erosion of the site by the sea previously reported has continued at an accelerated rate, and after surveys and careful examination, it seems that works of protection would cost far more than the station is worth. The light itself is of no value as one of the seacoast system, since the radius of Cape Romain light, to the northward intersects with that of Charleston to the southward to the seaward of the Bull Bay light. As a guide to entering Bull Bay Harbor it is also of doubtful utility, since it stands alone and the channel is too narrow to allow vessels to run in on bearings; besides, a record kept by the keeper shows that very few vessels enter or leave Bull Bay.

1897  Bull Bay, South Carolina.The erosion of this site by the sea continued until the southeast corner of the building which carried the tower was undermined, and there was danger that the whole structure would be washed down, with the loss of the apparatus. Hence the light was discontinued and valuable parts of the house and the illuminating apparatus were taken to Charleston, S. C. By the sundry civil act approved June 4, 1897, an appropriation of $10,000 was made for the reestablishinent of the station on a new site, and negotiations for the purchase of a site were begun.

1898 -680. Bull Bay light-station, South Carolina.The negotiations for the purchase of a new sight, with right of way to, and landing privileges on, Jacks Creek, were closed in October, 1897, by the refusal of the owner to sell. In December, 1897, the Department of Justice was requested to acquire the title by proceedings in condemnation. In January, 1898, the proper United States attorney was furnished with a plat and description of the site and in February he instituted formal proceedings. The case is to come up in the United States court in July, 1898.

1899  Bull Bay, South Carolina.A deed to the site selected for the light has been made and recorded, and the purchase is completed.

1900  Bull Bay, South Carolina.The site of this station having been purchased, the plans for the iron beacon and dwelling were prepared and bids were asked for furnishing the beacon and the material for the dwelling and outbuildings. Material for the wharf and wooden tramway, boathouse, and storehouse was sent to the station, and they were built by the end of February, 1900. The iron beacon was delivered in Charleston, S. C, in June, and was immediately transported to the station, where in the meantime work had been prosecuted on the other structures. The station is to be ready for lighting early in August, 1900.

1901  Bull Bay, South Carolina.The beacon was lighted on September 8, 1900, the work of reestablishing it having been completed.

1902  Bull Bay light-station, South Carolina.A large pond near the keeper's dwelling was found to be a source of malarial fevers. It also caused annoyance from mosquitoes bred there which the liberal use of kerosene oil frequently applied failed to relieve. It was therefore decided to drain the pond. It was found that a cutting through a sand ridge, 20 feet high and 500 feet wide at its base, would be required. This cutting was made and 460 feet of 8-inch terra cotta pipe was laid at the bottom, with masonry sandpits at each end. The cut was then filled in to a height of 5 feet above the pipe, and the tramway between the landing and the dwelling laid through the cut. A picket fence 500 feet long was also built to inclose the station.

1904  Bull Bay, seacoast of South Carolina.The dark sector of the light at this station was changed to lie between southeast by east and northeast by north.

1905  Bull Bay, South Carolina.The light-house site at this station was resurveyed and marked with monuments.

1906  Bull Bay, South Carolina.About 1,740 feet of barbed wire fencing was built, and various repairs were made.

1907  Bull Bay, South Carolina.The yard was covered with mud to prevent the drifting of the sand. The fence was rebuilt; a plank walk 1,400 feet long was built from the wharf to the station. Various repairs were made.

For a larger map of Bull Bay Lighthouse, click the lighthouse in the above map.