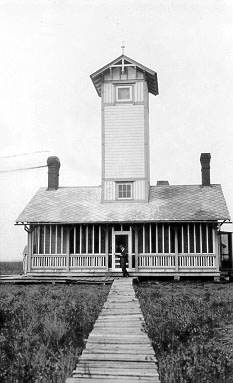 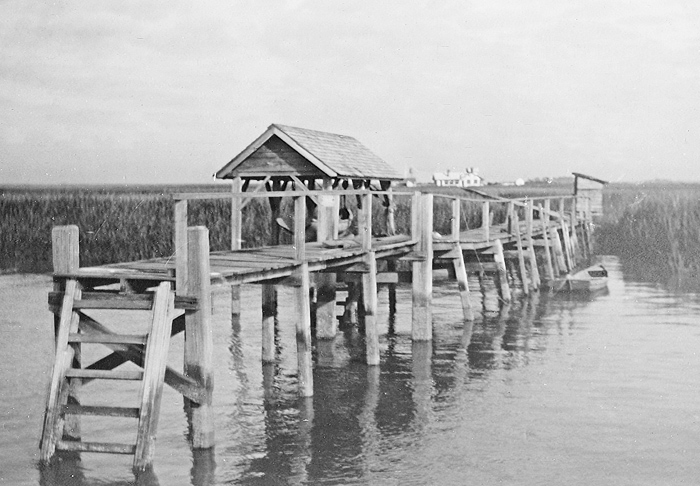 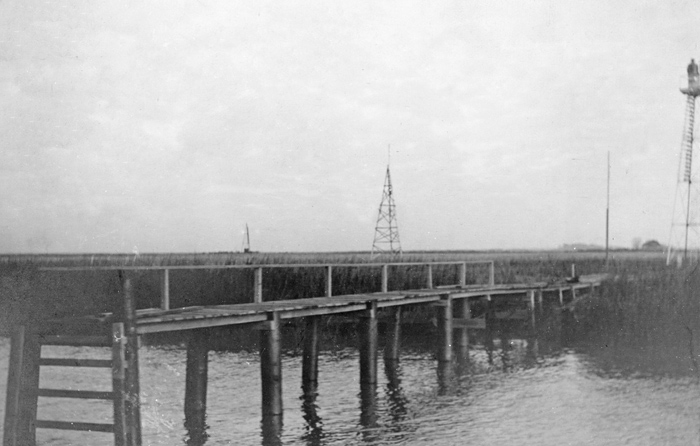 1853  Extracts from report of Capt. D. P. Woodbury, Light house Inspector, SIXTH DISTRICT, October 15, 1853.
Tybee Island knoll light-vessel might be replaced by a small lighthouse on a neighboring shoal, but I present no estimate at the present time.

1867  Tybee Island knoll.This was formerly marked by a light vessel, but it is proposed in re-establishing the station to substitute a light-house. This has not yet been done for want of time.

1868  Tybee Island knoll.Discontinued in 1861, and not re-established. An appropriation of $15,000 for a light-house to mark this knoll was made March 2, 1867, and by the terms of the law the work is to be done by contract. The necessary preliminary steps have been taken.

1869  Tybee Island Knoll light-vessel, (No. 33.)This vessel was removed from Fishing Rip when that station was discontinued.

1870  Tybee Knoll, Savannah River, Georgia.The appropriation for erecting a suitable light-house, to take the place of the light-vessel stationed to mark this danger, reverted to the treasury under act of July 12,1870. As it was supposed a screw-pile structure could be readily built, a personal examination was made by the engineer, and he selected the proper site, marking the spot with a watch buoy. Although the bottom appeared to be hard, and the lead brought up a clear sharp sand, he was convinced, from the general appearance of the shore below Fort Pulaski, and from finding doubtful bottom within 400 feet of the knoll, that the apparent hard surface rested over a layer of soft mud. He therefore caused borings to be made both at the buoy mentioned and a shoal spot distant 600 feet; both these borings showed a stratum of soft mud underlying the hard surface. The first boring was driven 13 feet, and the second 19. It is to be regretted that the defective character of the apparatus employed and the state of the weather prevented the auger from being driven deep enough to determine the thickness of the soft bed and the character of the substratum; but from what was done the engineer is of the opinion that it is impracticable to construct a light-house on the plan originally contemplated, or on any plan, except at an unwarrantable expense. It has been suggested that a light placed on the opposite side of the channel, and near the first buoy above the light-ship, would answer the purpose as far as the knoll is concerned. But in this case an important incidental advantage would be lost in such a position, that, with the beacon on Oyster Bed, it would give a range passing clear of a small lump which lies in mid-channel about a mile below. Further examination will be made at this locality before a reappropriation, as recommended, will be used.

1871  Tybee Knoll, Savannah River, Georgia.An appropriation for erecting a screw-pile Light-house, to take the place of the Light-vessel stationed to mark this dangerous shoal, reverted to the Treasury under the act approved July 12,1870. A screw-pile Light-house can be built at this place, which will better serve the purpose of navigation and at the same time be much less expensive to maintain than the Light-vessel. Borings show that below a thin stratum of clear, sharp sand, there is a layer of soft mud to a depth of nineteen feet at least, and perhaps considerably farther. This, though it will somewhat increase the expense, will not do so to an unwarrantable extent. The Light-house can be located in from two to five feet water, should stand on six piles, and be built somewhat similar to those in the Chesapeake Bay and sounds of North Carolina. The erection of this Light-house will insure the permanent removal of the Light-vessel now stationed at this place. An estimate is submitted.

1872  Tybee Knoll, River Savannah, Georgia.A lightship is now stationed off Tybee Knoll, in the River Savannah, which could readily be dispensed with in case a screw-pile light-house was built at this place. An appropriation was made by Congress for this purpose, but reverted to the Treasury under the operation of the act approved July 12, 1870.
A screw-pile light-house will serve the purposes of navigation quite as well as the light-ship, and the expense of maintenance will be considerably lessened. Borings were made more than a year ago, to determine the character of the foundation; it was found to be soft mud to a depth of 19 feet. A light-house on five or six hollow cast-iron piles, with large flanges to give bearing, could be built at very little more than the usual cost of such structures. Its erection would insure the permanent removal of the light-ship, which is now in need of extensive repairs. It is estimated that the cost of this light-house will be $18,000, and an appropriation of this amount is recommended.

1873  Tybee Knoll, Savannah River, Georgia.Plans and specifications for the light-house authorized by the appropriation at last session of Congress, to take the place of the light-ship now stationed there, have been prepared, and a contract made for the fabrication of the iron-work and lantern. The light-house will be a square structure on five wooden piles incased in cast-iron sleeves, with two additional fender-piles, one up and the other down stream. The light will be of the fifth order. The station will be provided with a fog-bell struck by machinery.

1874  Tybee Knoll, Savannah River, Georgia.The work of constructing a screw-pile light-house to take the place of the present light-vessel on the knoll has been suspended to await completion of a channel now being dredged out in this vicinity, under the direction of the War Department. The light-vessel will therefore be retained for the present.

1875 - 352. Tybee Knoll, Tybee Knoll Shoal, entrance to Savannah River, Georgia.As stated in the last annual report, work on this structure was suspended, owing to the fact that a channel was being dredged in this vicinity, under the direction of the War Department, which would render the light-house in its proposed position useless. Examinations have since been made with a view to the establishment of range-lights to guide through the dredged channel. The board, however, is not prepared to submit an estimate for this work, but request that the appropriation made for Tybee Knoll be made available for range-lights.

1876 -Tybee Knoll Shoal, entrance to Savannah River, Georgia.The appropriation for a light-house on Tybee Knoll having been made available for the establishment of range-lights to guide through the dredged channel of Tybee Knoll, the work will be commenced at as early a day as practicable.

1877  Tybee Knoll Cut, Long Island, Savannah River, Georgia.Title to two pieces of land, of 5 acres each, on Long Island, has been made by the governor of the State of Georgia to the United States, for sites of the two range-beacons to be built to mark the dredged cut through Tybee Knoll. The title-papers have been forwarded to the Attorney General of the United States for his opinion. Work will be commenced as soon as title to the sites is perfected. 1878  Tybee Knoll Cut Range Beacons, Lone/ Island, Savannah River, Georgia.At the date of the last report two sites of 5 acres each at the easterly end of Long Island, Savannah River, had been located, examinations made, and title to and cession of jurisdiction obtained from the State of Georgia and submitted for the approval of the Attorney-General. The title has since been approved and the deeds recorded. The structures for the front and rear lights have been built and an earthen causeway constructed from the landing to the front light, and thence to the rear light. The works were so far completed by the middle of June as to leave the station ready for the illuminating apparatus and outfit. It will be lighted on the 1st of November next.

1879  Tybee Knoll Cut Range beacons, on the easterly end of Long Island, Savannah River, Georgia.The station was lighted on the 1st of November, 1879. Mineral-oil lamps are used, and their superiority in brilliancy over the other lights is perceptible on entering the harbor.

1882  Tybee Knoll Cut Range-beacons, on easterly end of Long Island, Savannah River, Georgia.This station was severely damaged by the hurricane in August last. The rear tower, which was totally destroyed, was rebuilt. The front beacon, which was also the keeper's dwelling, was less damaged. A boat-house was built. The station is now in good order.

1886  Tybee Knoll Cut Range Lights.On the easterly end of Long Island, Savannah River, Georgia. The keeper reports that an earthquake shock was felt there on September 5, at 11.41, standard time, and lasted about a minute. The shock was light and came with a roaring sound from the southwest.

1886  Tybee Knoll Cut range beacons, Long Island, Georgia.Six piles were driven for the wharf and 150 lineal feet of new plank walk connecting it with the dwelling were built, and certain minor repairs were made.

1891  Tybee Knoll Cut Range, Savannah River, Georgia.Repairs to the elevated plank walk, equivalent to the renewal of 1,000 lineal feet, were made. In consequence of changes in the current of the Savannah River, caused by the construction of new jetties, the water near the head of the boat landing has shoaled so much that at low water the keeper's boat grounds are 75 feet from its head. It should be extended 100 feet into the river.

1893  Tybee Knoll Cut Range, Savannah River, Georgia.Extensive shoaling having occurred in the Savannah River opposite this station, it became necessary to extend the wharf 145 feet toward the channel. While this was being done, the elevated plank walks were repaired. A fireproof oil house, 9 by 11 feet in the clear, was built. It has ventilators and drain pipes, and shelves sufficient to receive four hundred and fifty 5-gallon oil cans. 1894  Tybee Knoll Cut range, Savannah River, Georgia.Two large dredges collided with the dwelling, storehouse, and oil house during the storm of August, the line of plank walk was broken in many places by the passage over it of large lighters with their anchors dragging, and a drifting bark went through the wharf. Hence extensive repairs were made. A new storehouse, boathouse, and oil house were built, 4,174 running feet of new plank walk were constructed, and a long wharf at the station was put into good condition. Subsequent to the repairs of the wharf a bark, which had been driven ashore in the vicinity, was dug out, and in being hauled off it injured the wharf again. The owners of the bark made certain repairs, but they did not restore it entirely to its previous good condition.

1897  Tybee Knoll Cut Range, Georgia.Some 820 feet of plank walk which had been overturned by a cyclone was replaced. Various repairs were made.

1899  Tybee Knoll Cut, Georgia.This station suffered severely from the storms of September and October, 1898. The superstructure of the wharf was renewed, a boathouse and about 1,060 running feet of elevated plank walk was built. Various repairs were made.

1905  Tybee Knoll Cut range, Georgia.A boathouse and boat landing, with 1,400 feet of elevated plank walk connecting with the dwelling, were built on the south channel of the river.

1918  Raised tower on dwelling 16 feet and changed illuminating apparatus from a lens lantern to an oil reflector, using it for the rear instead of front light of range; constructed a new front range light on pipe tower on piles in front; constructed new boathouse and landing, toll house, and made general repairs. $4,983.

For a larger map of Tybee Knoll Cut Range Lighthouse, click the lighthouse in the above map.

The historic lights no longer stand, but a modern pair of lights serve as Tybee Knoll Cut Range today. The modern lights are located at the Coast Guard station on Cockspur Island.