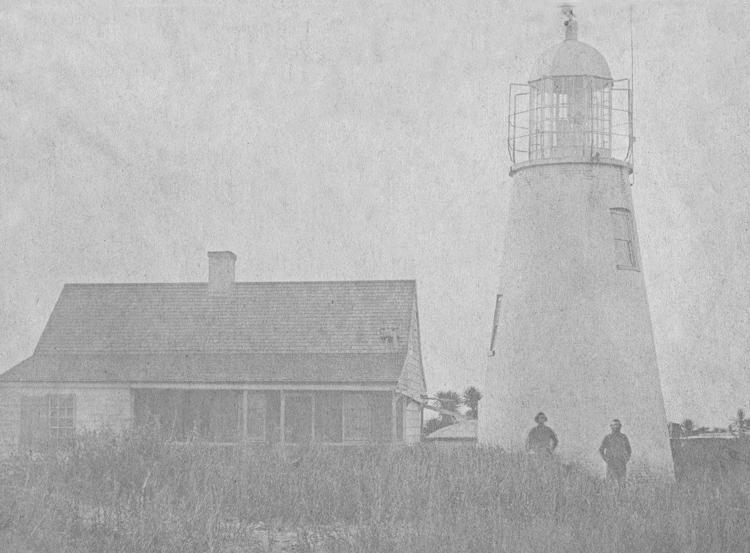 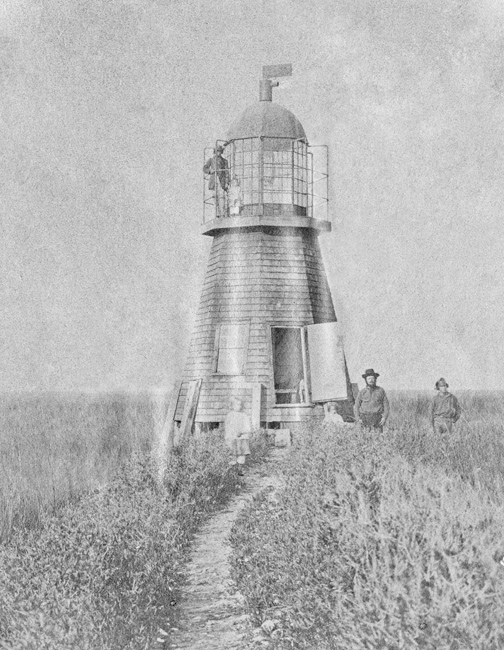 1819  December 14. Five acres of land on Wolf Island, County of McIntosh for a light-house or beacons.

1838  Beacons on Wolf Island, east side, near north end of Wolf Island. No. of lamps, 12. Built in 1822. Two beacons here, one of brick and the other of wood; the first twenty-five, and the second fifteen feet above level of the sea.

1838  Beacons on Wolf islandreflectors worn out; new ones required.

1841  Within a few years past, further improvements have been made in the size and quality of the reflectors, and the quality of the glass with which the lanterns are glazed. The 21-inch improved parabolic reflectors are made in this country, at an expense, including the lamps, of eighty dollars, in dies or moulds, (instead of being hammered, as formerly,) plated with 16 ounces of silver, and highly polished. The lanterns are improved by substituting for panes of common glass, 8 by 10 or 10 by 12, plate glass, 20 by 24 inches.
In 1839, the Boston and Cape Cod lights were fitted up with these reflectors.
In 1840, Faulkner's Island, Stonington. and Tybee beacon lights, ditto.
In 1841, Thatcher's Island, (two, Scituate, Chatham, (two,) Newport, Cape Henry, Old Point Comfort, New Point Comfort, Wolf Island, (two,) Thunder Bay, and White Island, ditto. The cost of fitting up a house with a new lantern, with 15 lamps and 15 21-inch reflectors, is about $3,500.
The cost of fitting up a house with 10 lamps and 10 14-inch reflectors is about $2,000.

1855  A wooden breakwater has been erected for the protection of Wolf island beacons, Georgia.

1855  When the dwelling house and front beacon of the Wolf Island range wash away an equivalent range may be erected in a situation less exposed.

1867  Wolf Island beacons, destroyed during the war, will soon be re-established upon an improved design. One of the beacons will be movable.

1868  Wolf islandtwo beacon lights.During the year a substantial dwelling of frame for the keeper has been erected, with tower and lantern on top; the work is not yet completed. The foundation of the building consists of 11 wooden piles 12 inches in diameter, driven to a depth of 28 feet, cut off below the surface of the marsh and cased with an iron cylinder three feet below the surface, and extending four feet above to receive the caps for sills; there is a platform 10 feet wide built on wooden piles extending along the entire front, and on one side back to and in front of the kitchen. A cistern also is placed in front of the kitchen under the platform. Beacon light.A skeleton frame beacon on a tramway 100 feet long is built in front of the keeper's dwelling, and distant therefrom 480 feet These lights were exhibited for the first time (since their discontinuance in 1861) on the evening of October 10.

1869  Wolf Island Beacons, Ga.These beacons were completed and the lights exhibited October, 1868. The station is in good condition.

1877  Wolf Island, Doboy Inlet, Georgia.Extensive repairs have been made at this station. The train-way and sills of the front beacon have been renewed; the elevated walk to the beacon and the gallery of the dwelling have been entirely rebuilt.

1882  Wolf Island Range-beacons, near north end of Wolf Island, Georgia.The front light-house was entirely rebuilt on a site 600 feet further seaward, to increase the utility of the range. The rear light-station was extensively repaired, and a new boat-house was built.

1887  Wolf Island range, near north end of Wolf Island, Georgia. Some 1,200 bushels of oyster-shells were distributed under and around the keeper's dwelling, which is situated in a marsh.

1891  Wolf Island Range, seacoast of Georgia.The platform, 90 feet by 12 feet in plan, attached to the dwelling, which stands in a marsh, was repaired with new sills and deck, and about 500 lineal feet of elevated plank walk was renewed. A fireproof brick oil house, 9 feet by 11 feet in the clear, with ventilators, drainpipe, and shelves sufficient to receive 450 5 gallon oil cans, was built.

1893  Wolf Island Range, entrance to Doboy Sound, Georgia.The front beacon was moved 11 feet to the southward to accommodate the range to the changes in the channel. New sills were put under the beacon, and the boathouse was moved and erected on piles sheathed with yellow metal.

1894  Wolf Island range, entrance to Doboy Sound, Georgia.The front beacon, which was overturned by the sea during an August storm, was reerected on a substantial brick foundation, to which it was anchored by iron rods. Some 600 running feet of plank walk were built and various repairs were made.

1898  Wolf Island Range, Georgia.Some 130 feet of elevated plank walk was rebuilt, and a ladder sheathed with yellow metal was put up at the landing place. Various repairs were made.

1899  Wolf Island, Georgia.This station suffered almost as much as Sapelo. The front beacon was rebuilt and moved 28 feet to the southward to conform to the new channel. The boat landing and boathouse were replaced and about 1,388 feet of plank walk was built. Various repairs were made. In February the range was discontinued and the boathouse was transferred to the Sapelo light-station.

For a larger map of Wolf Island Lighthouse, click the lighthouse in the above map.