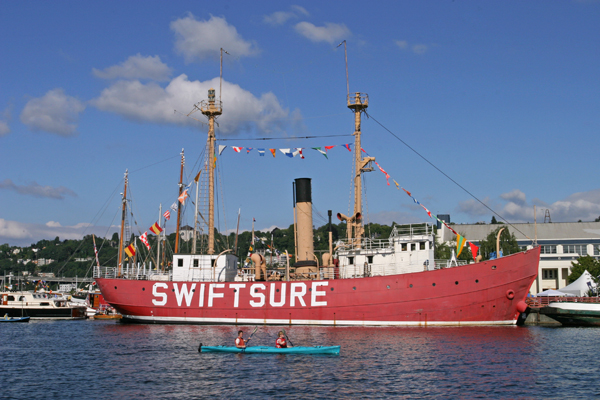 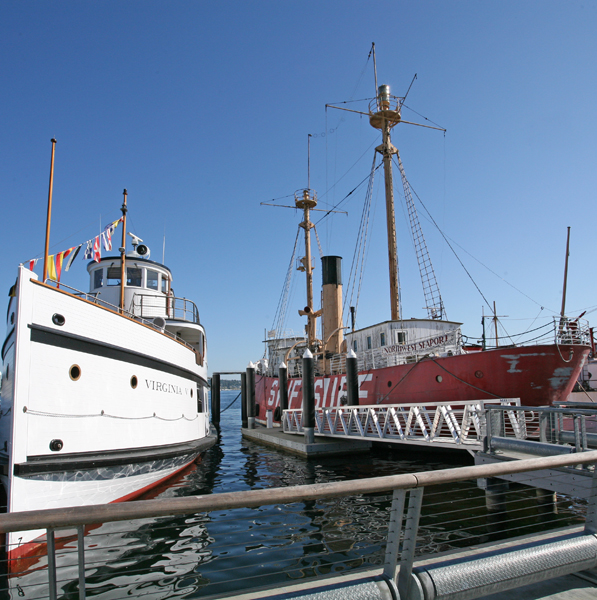 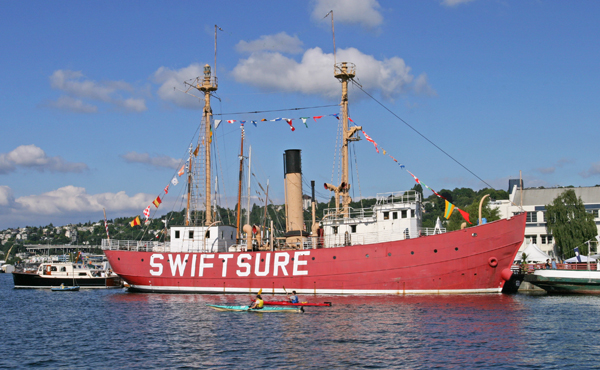 Swiftsure Bank is located roughly fourteen miles northwest of Cape Flattery, and in 1909 was the final lightship station to be established along the Washington Coast. The first vessel to anchor at the station was the steel-hulled LV 93, which was painted yellow and had SWIFTSURE in bold black lettering on her sides. The lightship which carries the SWIFTSURE lettering on her hull today was actually never permanently assigned to the Swiftsure station. This vessel, known as LV 83, was launched in Camden, New Jersey in 1904, and then steamed around the tip of South America to take up station at Blunts Reef off Cape Mendocino in California. On June 15, 1916, the steamer Bear ran aground near the lightship, and 155 people were forced to seek temporary refuge aboard the lightship.

In 1930, LV 83 sailed south and began service as the San Francisco lightship, marking the entrance to San Francisco Bay. Due perhaps to the infamous San Francisco fog, a foghorn was installed on the ship in 1932, and the ship's 1,000-pound bell was subsequently used as a backup. During World War II, the Navy borrowed LV 83 from the Coast Guard, who had assumed jurisdiction of all navigational aids in 1939. Guns were installed on the lightship's foredeck, bridge, and stern, and she was given a fresh coat of Navy-gray paint. With the crew's quarters enlarged to accommodate forty sailors, the lightship served as a patrol and guard boat at the entrance to San Francisco Bay.

After the war, LV 83 returned to the San Francisco lightship station, where she served until 1951 when she became the Relief Lightship for the Washington lightships. LV 83 was deployed to Umatilla Reef, Columbia River Entrance, and Swiftsure Bank on various occasions over the next nine years, while the lightships at those stations returned to port for maintenance and repairs.

After fifty-six years of service, LV 83 was decommissioned in 1960. Save our Ships, the predecessor of Northwest Seaport, finalized the purchase of the lightship on May 2, 1966 under signature of Donald F. Miller, U.S. Marshal for the Western District of Washington. The lightship was placed on the National Register of Historic Places in 1975 and declared a National Landmark in 1989. LV 83, along with two other lightships, holds the title of the oldest remaining lightship and is the only one to still have her original steam engines.

At 10 p.m. on July 1, 2011, Shannon Fitzgerald, president of Northwest Seaport, flipped a switch that activated a beacon atop the Swiftsure Lightship, whose light had been inactive since the vessel was decommissioned in 1960. The relighting completes the first phase of the restoration of LV 83. Besides the restoration of the light, new bilge pumps and and an alarm system have been added and wood purchased for a new upper deck. The work was made possible through Federal Transportation Enhancement Act funds made available through the Washington State Department of Transportation and supplemented by matching funds.

For a larger map of Lightship Swiftsure LV 83/WAL 513 Lighthouse, click the lighthouse in the above map.

From Interstate 5 in Seattle, take exit 167. At Fairview Street, the intersection at the end of the off-ramp, go right one block to Valley Street. Turn left onto Valley Street and move into the far right lane. Drive 1 block to Terry Ave. N. (just past the green park area before you reach the light at Westlake) and turn right as though you're going to the 'Naval Reserve' building. Northwest Seaport will be on your right between the green park area and the 'Naval Reserve' building. Call (206) 447-9800 for hours and more information.