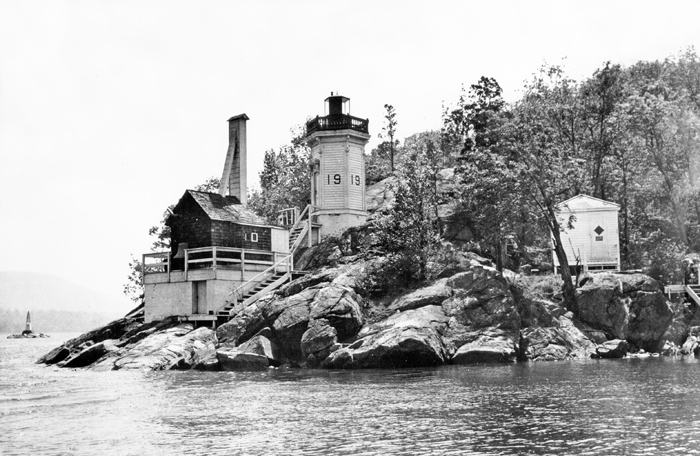 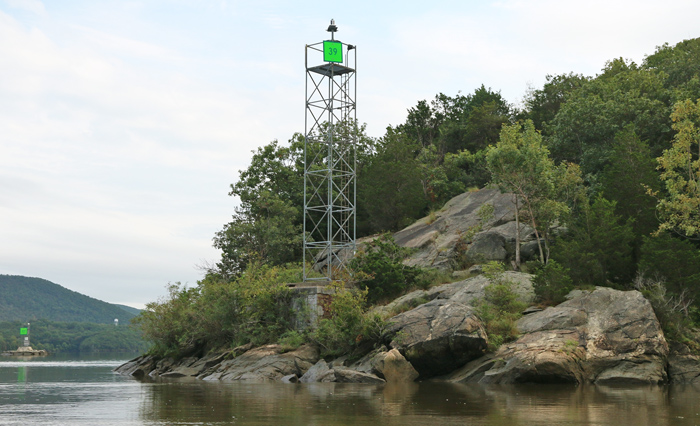 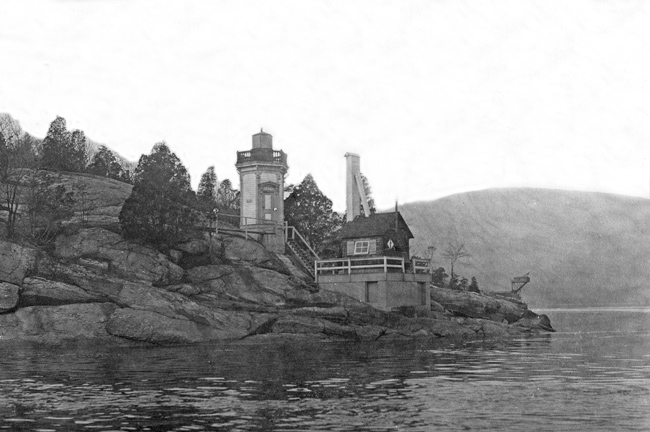 Appropriated by act of Congress, for three lamps on the Hudson River, one at the extreme part of West Poin; one at the bend of the river two miles N. of Catskill landing on the W. side of the river; & one at Pyrmes Hook two miles No of the city of Hudson. August 14, 1848, $150.

1855  In renovation and improvement, three wooden tripods were put up at Van Wie's dam, Cow island, and New Baltimore, and three iron beacon-posts at Primer's Hook, Catskill Reach, and West Point, all mounted with bug-lights.

1868  West Point.Repairs to the ladder and foundations were made by the mechanics of the post during the summer. It requires nothing.

1870  West Point, New York, Hudson River.It is proposed to erect a suitable structure for a beacon, to be fitted with a sixth-order lens, at this point, to take the place of the present stake-light, for which an estimate of $1,500 is inclosed in this year's estimates.

1872  West Point, River Hudson, New York.The rebuilding of the beacon is progressing, and will be completed at an early day. The site of the beacon is connected with that of the former stake-light, and no change in the sailing directions is made.

1873  West Point, New York.The light was exhibited from the new beacon during the month of September, 1872 The apparatus is dioptric, of the 6th order of the system of Fresnel, and shows a fixed white light over 270° of the horizon. The focal-plane is 40 feet above the river.

1888  West Point, Hudson River, New York.A bell-tower, 15 feet by 15 feet by 18 feet in plan was built, and a fog-signal station established, and all completed work was painted. The lower part or piers were inclosed and a closet was built in the bell-tower.

1890  West Point, Hudson River, New York  A concrete pier was built in front of the lighthouse.

1921  A. P. Andersen, keeper, West Point Light Station, N. Y., went to the assistance of two small boys in a rowboat drifting down the Hudson River without oars. The boat, which was partly filled with water, was towed to shore. Happened on August 1, 1921.

1929  A. P. Anderson, keeper of West Point Light Station, M. Y., rendered assistance on April 20 to the driver of one of the motor boats in the Albany-New York speed boat races.

1935  Stephen J. Nolan, attendant of West Point Lights, N. Y., on May 29 rescued two young men whose canoe had capsized when they were caught in heavy rain and wind storm while canoeing in the vicinity of the station.

1935  S. Nolan, light attendant of West Point Lights, N. Y., on August 5 went to the assistance of two men whose sailboat capsized off Magazine Point. He took both men aboard his boat, and later, with the help of an Army pontoon, towed their disabled craft to the deck.