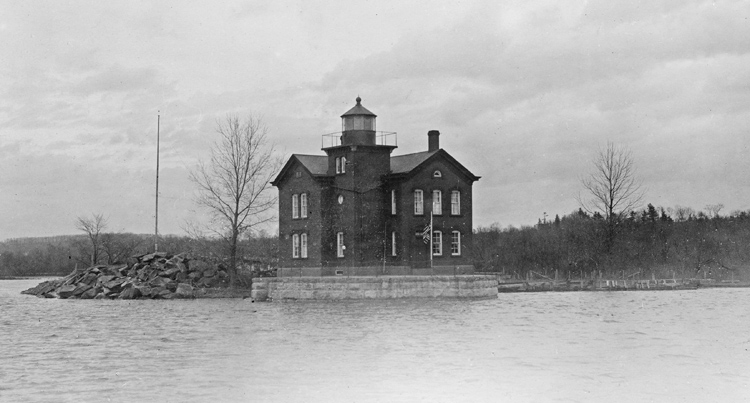 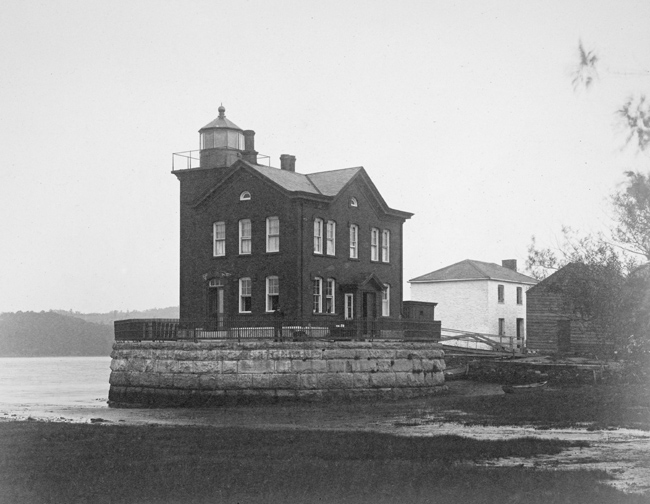 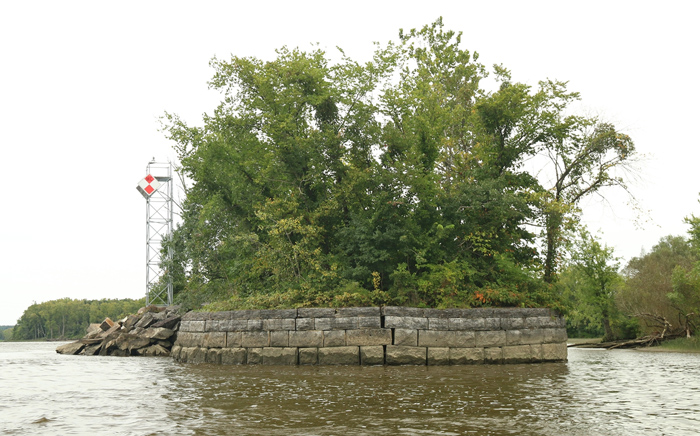 1832  "The Independence Newspaper" of Poughkeepsie, New York, March 21, 1832. "MELANCHOLY OCCURRENCE -- On Tuesday last, about 12 o'clock, M., the ice in the Hudson River at Stuyvesant Landing, began to give way. The river had at that time risen to an unusual height, the water being twelve feet above low-water mark, covering the docks to the depth of four feet, and making an entrance into most of the storehouses on the wharfs. Serious and well-grounded apprehensions were entertained that every building along the margin of the river would be swept away, but happily those fears were not realized, the buildings having sustained only a trifling damage. The ice continued to move about, and apparently in one solid mass several miles in extent. During this interval, a most distressing scene was witnessed at the site of the upper lighthouse, situated a mile and a half above the Landing. This was a stone building, 20 feet by 34, and two stories high, with a mole surrounding it 4 feet in height. The water had risen to the top of the mole before the ice began to move, which rendered the situation of the inmates truly alarming. Soon the immense field of ice above was seen to swing from its moorings, and coming down with irresistible force struck the lighthouse, which in a moment was a heap of ruins.

There were at the time ten individuals in the building, four of whom, melancholy to relate, were buried under its crumbling walls. Mr. Volkert Whitbeck, the keeper of the lighthouse, his wife, their daughter, Mrs. Van Hoesen, and three other individuals escaped from the falling edifice, barely in time to save their lives. Those who perished were: two daughters of Mr. Whitbeck, aged 15 and 13 years, and a son of Mrs. Van Hoesen, aged 12, and her infant child. All must inevitably have found a premature death, but for the intrepid exertions of Mr. Charles M. Beecher, to whose praiseworthy efforts the rescue of the survivors is mainly attributed. Mr. Beecher put off in a small boat from the shore to relieve Mr. Whitbeck and his family from their perilous situation, but owing to some delay in arranging the furniture &ct., they were not prepared to leave the building until it began to fall -- and then too late for some of the unfortunate inmates. --- Kinderhook Sentinel."

1838  Stuyvesant light, (stationary,) upon the extremity of a flat on the east side of the river, two miles above Stuyvesant landing. The building from which it is shown is erected upon a pier at the end of the flat. This light is of service to vessels making it, on account of the narrowness of the channel near it.
The lantern contains five lamps, with reflectors, placed upon two horizontal tables. The reflectors are spherical, their diameters are 13 ¾ inches, and average weight 2 Ibs. 6 ounces.
The house is of stone, containing four rooms, and is in good order; it is placed six feet above high-water mark. The building at this place was swept away on the breaking up of the river in March, 1832, when the present keeper lost four out of a family of nine individuals.

1841  From Stephen Pleasonton to Edward Curtis, Collector of Customs, N.Y. August 12, 1841. Whitewashing and painting required here may be done; the dyke between the light-house and shore to be repaired at an expense not exceeding thirty dollars, as estimated.

1842  Stephen Pleasonton: "Stuyvesant light, Hudson river, erected in 1830, on a pier, at the edge of a meadow, for $4,000." This light-house, with the pier on which it was built, was swept off by the floating ice in March, 1832, with several of the keeper's family, who were lost. This was not the only damage done in that neighborhood. Mr. Walter Butler, in a letter to the collector, transmitted to this office, states that "we are suffering much at our village, (Stuyvesant.) The prospect is that there will be a great loss of property." The case was submitted to Congress, and an appropriation made of $5,000 for rebuilding the light-house, and it was accordingly rebuilt.

1850  Stuyvesant light-house. 4 lamps; Christiana Wilbick, keeper; supplied June 7, 1850. Some trifling repairs have been made to this light-house since we supplied it, and we found the apparatus much cleaner than formerly, probably owing to quite a severe reprimand from the superintendent. This is one of those light-houses that we visit that is always out of order. Delivered 106 gallons spring oil, 52 gallons winter oil, for total of 158 gallons. 30 tube glasses; 4 gross wicks; 20 yards cloth; 1 buff skin; 1 box Tripoli; 1 box soap; 1 pair of scissors; 4 burners, complete; 2 fountains; 1 lamp; 1 hand lantern. Not any spare lamps; 16-inch reflectors.

1855  SIR: I submit, herewith, plans and estimates for the repairs of the light-house piers in the Hudson river, with accompanying explanatory sketches.
Of these, there are five located above Poughkeepsie, and at Esopus Meadows, Rondout, Saugerties, Coxsackie island, and Stuyvesant Mearlow. All these are located upon the extreme point of marshes projecting into the river, or else upon an island, or insulated shoal nearly upon a level with low water of the river. As originally constructed, they are wooden crib piers of squared timber, revetted vertically with 3-inch plank, raised about four feet above highest water, or else the site is protected by wharfing at the water's edge of similar wood-work and filling.
In addition to the ordinary decay which may be expected from materials of this kind, when used for such a purpose, these piers are further exposed to injury from floating ice during the breaking up of winter, the effects of which are very marked upon most of them.
Stuyvesant light-house.This house is located on the extreme edge of a marsh or meadow, projecting into the river on its east side, and overflowed during freshes. It has a protection of wooden crib-work, filled in with small stones, placed along shore, and on the north and south sides of the site. Around the house it is raised to the level of six feet above high-water, the balance being on a level with the latter, or a little above it; the lower floor of the house and the ground immediately around it being six feet above the same level. That portion of the crib-work on the north side projecting from the main pier towards the shore is decayed, and altogether useless. It is assumed that a substantial enrockment on the north side, as proposed on the plan herewith, will afford sufficient protection to this house during the season of ice and freshes. This, by estimate, will require 720 tons of stone, at $1 25, $900.

1866  Special appropriations for which estimates are submitted are needed for the following works in this district:
For the reconstruction of Stuyvesant light-house, which it is proposed to rebuild upon a similar plan. This is an old wooden structure, badly decayed.

1867  Stuyvesant, Hudson river, N.Y.Driving of piles just begun; will be finished and part of stone pier laid before river closes

1868  Stuyvesant.This station is now being reconstructed, and the work will be completed this season.

1869  Stuyvesant, Hudson River, N. Y.The rebuilding at this station is completed, and the old buildings are being removed, and the grounds put in order.

1870  Stuyvesant, New York, Hudson River.As the portable beacons placed on this river must be removed to prevent their destruction by ice and freshets, owing to the close of navigation, this point has been selected for storing those above it; and the old dwelling for the keeper will be converted into a storehouse for their preservation.

1871  Stuyvesant Light house, Hudson River.The old dwelling at this station will be retained as a depot for keeping portable beacons of Hudson River during the close of navigation.

1872  Stuyvesant, River Hudson, New York.The old dwelling has been refitted, with the view of using it as a store-house for the river Hudson beacons during the winter season on the suspension of navigation. The roadway has been raised above the level of the freshets, and a small bridge built, with projection of piles against the bridge and its approaches.

1889  Stuyvesant, Hudson River, New York.A new barn was built from the material of the old one and spare lantern glass furnished the station.

1891  Stuyvesant, Hudson River, New York.Some 700 feet of fourstrand wire-ribbon fence, with 2 by 4 inch cap, were built, three boundary posts were set, and various repairs were made.

1902  Stuyvesant, New York.At this station the ice gorge that did so much damage at Coxsackie light-station carried away the old stone light-house situated to the north of the present one; also an outhouse, the bridge, the pier railing, the site fence, and all the trees. The westerly dwelling wall was broken through; the northerly wall was cracked, and the parlor was filled with ice which broke through the floor into the cellar. The brickwork of the tower and the front door were crushed. The damage to the dwelling was repaired, and material for a new bridge was delivered. The work was begun on March 20 and continued to June 21, 1902.

1903  Stuyvesant, New York.A new foot bridge was erected. A removable pier railing to replace one destroyed by ice, composed of iron stanchion and chain, was supplied and erected. On November 27, 1902, about 500 tons of riprap stone were placed on the site of the demolished old light-house to protect the light-house from the ice. This work was done under contract. Various repairs were made.

1930  Charles, R. Riley, keeper, Stuyvesant Light Station, N. Y., rescued William Rein from his overturned speed boat on April 26, towing the boat to the lighthouse, and supplying its occupant with clothing and money with which to proceed to New York.

For a larger map of Stuyvesant Lighthouse, click the lighthouse in the above map.