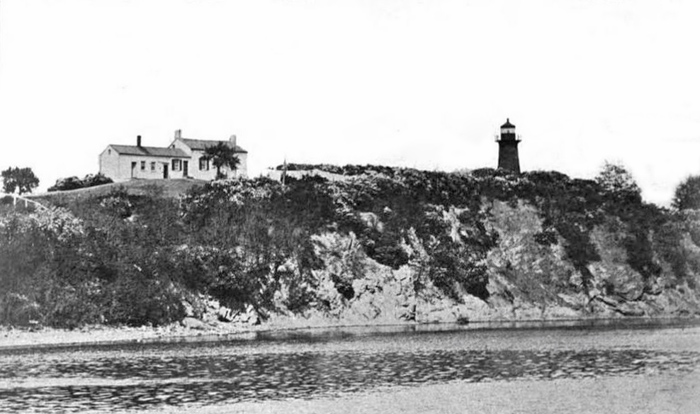 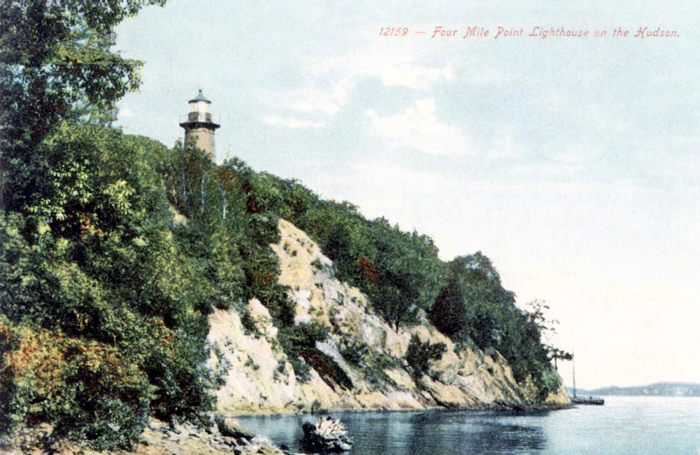 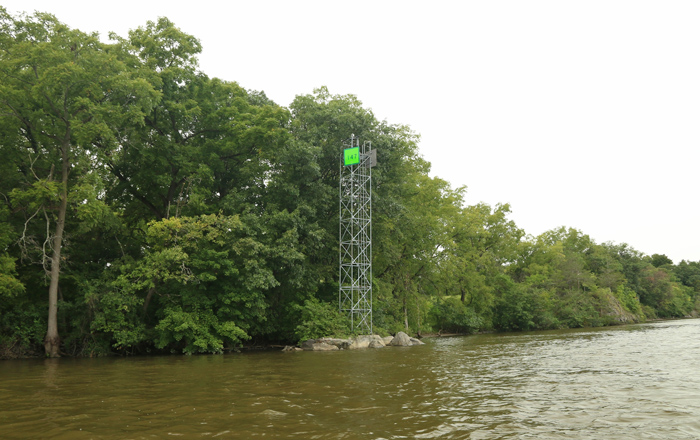 1838  Four-mile-point light (stationary) is situated on the extremity of a bluff point, on the western bank of the Hudson, three miles above the town of Athens.

The channel of the river runs close by this point, and is contracted by a flat, which extends far across from the opposite shore. In order to avoid the flat, vessels are obliged to run close in to the point, which is high and well defined. As the bluff itself is a sufficient guide through the channel at night, the light is not considered of much utility.

The lantern is upon the summit of a stone tower; it was newly fitted up on the first of October with seven lamps and reflectors, which are arranged around two horizontal rims or circles so as to throw the light into the reaches up and down the river and across the channel. The lamps are fastened securely to the iron circles, and the reflectors are supported in front of them by brackets.

The dwelling-house, containing five rooms, is of stone, and is in good repair.

1850  Four-mile Point light-house. 6 lamps; William Van Vleet, keeper; supplied June 7, 1850.
This is the best kept establishment on the river. There have not been any repairs done since we supplied it last year. There were a few repairs that might have been done, which would have made the buildings in good order, and have added something to the keepers comfort and convenience.
Delivered 156 gallons spring oil, 67 gallons winter oil, on hand 38 gallons, for total of 261 gallons.
30 tube glasses; 4 gross wicks; 20 yards cloth; 1 buff skin; 1 box Tripoli; 1 box soap; 1 pair of scissors; 1 hand lantern; 1 wick box.
One spare lamp, in good order; common burners; 14-inch reflectors.

1868  Four Mile Point.Repairs to cistern, to chimney, to one room, and to the barn are required, and when made the station will be in good condition.

1869  Four Mile Point, Hudson River, N.Y.  Some small repairs are needed, and will be made before the end of the working season.

1880  Four-Mile Point, Hudson River, New York.An iron tower was made, and is now being finally fitted for erection at this station, in place of the dilapidated and unsightly stone structure from which the light is now shown.

1881  Four-mile Point, west side of Hudson River, halfway between Athens and Coasackie, New York.The dwelling is old and beyond repair. It should be replaced by a new structure.

1882  Four-mile Point, west side of Hudson River, about halfway between Athens and Coxsackie, New York.The dwelling-house is in bad repair. A new structure should be erected without delay.

1883  Four-mile Point, Hudson River, New York.The dwelling-house and kitchen, which were in bad condition, were thoroughly repaired. But they are old, and should be rebuilt before long.

1888  Four-mile Point, near Coxsackie, Hudson River, New York.  Some 750 feet of wire fence were built, with gates fitted, and minor repairs made. Orders have been given that the keepers dwelling here be put in good repair.

1928  Four Mile Point Lighthouse was discontinued and a new light established nearer to the river bank.

For a larger map of Four Mile Point Lighthouse, click the lighthouse in the above map.