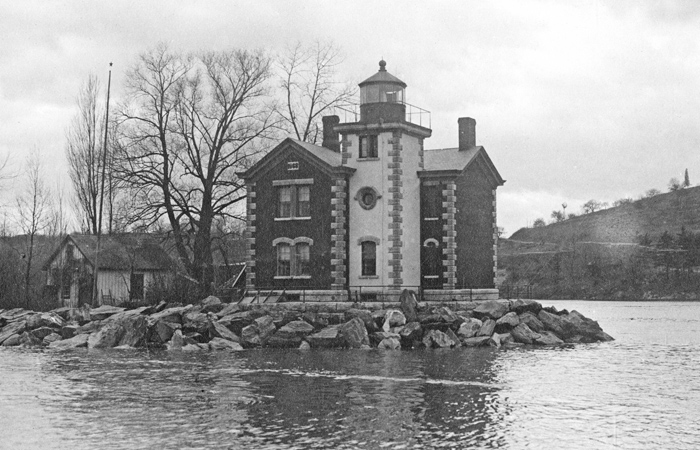 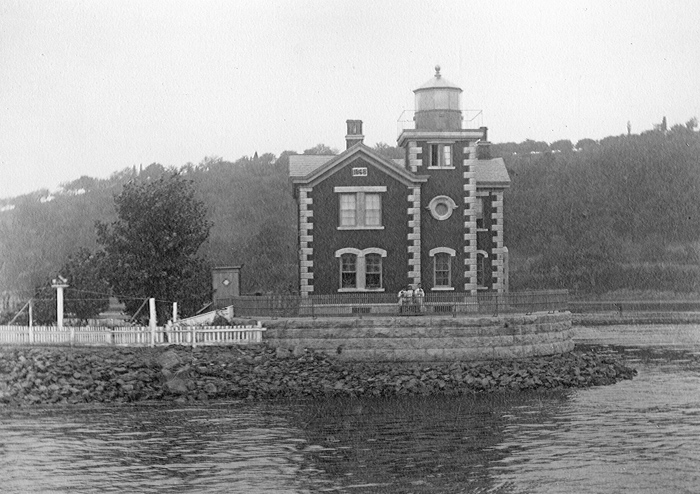 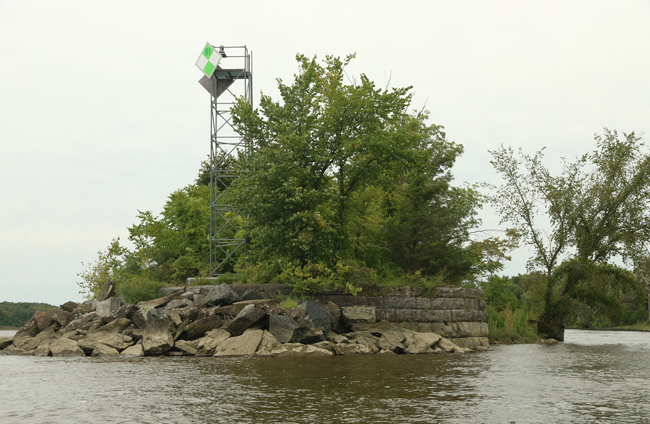 1838  Coxsackie light, (stationary,) on the northeastern point of Rattlesnake island, two miles above Coxsackie landing, is useful as a guide to vessels passing through the narrow channel, formed on the one hand by the island on which the light is placed, and on the other by a flat which extends over from the eastern bank of the river. The light is shown from the keeper's dwelling. The lighting apparatus is similar to that at No. 32. Although the reflectors are new, there is an indentation at the bottom of each where its hook is soldered on.

1841  From Stephen Pleasonton to Edward Curtis, Collector of Customs, N.Y. August 12, 1841 Gravel may be put over the rough stone placed about the foundation last year, as proposed.

1850  Coxsackie light-house. 6 lamps; Jonas Parker, keeper; supplied June 7, 1850. Nothing has been done to this establishment since last year; consequently, the remarks made then will answer now. All the change that has been made is in the keeper, who, I hope, will prove a good one.

One spare lamp, in good order.

1855  SIR: I submit, herewith, plans and estimates for the repairs of the light-house piers in the Hudson river, with accompanying explanatory sketches.
Of these, there are five located above Poughkeepsie, and at Esopus Meadows, Rondout, Saugerties, Coxsackie island, and Stuyvesant Meadow. All these are located upon the extreme point of marshes projecting into the river, or else upon an island, or insulated shoal nearly upon a level with low water of the river. As originally constructed, they are wooden crib piers of squared timber, revetted vertically with 3-inch plank, raised about four feet above highest water, or else the site is protected by wharfing at the water's edge of similar wood-work and filling.
In addition to the ordinary decay which may be expected from materials of this kind, when used for such a purpose, these piers are further exposed to injury from floating ice during the breaking up of winter, the effects of which are very marked upon most of them.
Coxsackie light-house.This house is located at the northern extremity of an island near Coxsackie, and protected on the north by a projecting timber crib-work and filling. At the junction of this protection with the island, near the house, the banks are being abraded by the current of the river during the freshes, and the lighthouse grounds thus encroached upon by the water. To prevent further abrasion of the site, it is proposed to place an enrockment of stone along the shores of the site, connected with the southern extremity of the crib-pier, and extending on the eastern side two hundred feet therefrom, and on the western side about one hundred and fifty feet, across a small cove or hollow worked into the island by the current, at its junction on the west side with the pier. One-half of the pier requires new planking, and four additional fender-beams are needed at the apex. The estimate for this work is, for stone, 900 tons, at $1,125; and for timber work, $225; total $1,350. 1865  At Rondout and Coxsackie, the light-houses require repairs and the sea-walls to be rebuilt. Special estimates of the cost have therefore been submitted to Congress.

1866  It is hoped that the foundations of Rondout and Coxsackie light-houses will be laid before the winter sets in, and that the materials will be ready to insure the completion of the work next season.

1867  Coxsackie, Hudson river, N. Y.Pile foundations finished, and part of stone-work of protecting pier laid. It is intended to complete the pier, carry the house up and roof it this season, and complete the inside early in the spring.

1868  Coxsackie.This station is now in process of reconstruction, and will be completed this season. The old buildings will be then taken down, and whatever stone is in them will be placed around the new pier.

1869  Coxsackie, Hudson River, N. Y.The rebuilding at this station has been completed this season, and the station is now in good condition.

1876  Coxsackie, Hudson River, New York.The foundation of this lighthouse has been protected by several hundred tons of stone.

1877  Coxsackie, Hudson River, New York.This station has been much improved during the year. The foundation has been protected by riprap, and the station put in good condition.

1886  Coxsackie Light-Station.A tower 32 feet high on an island in the Hudson River, New York. The keeper states that an earthquake was felt at that station on August 31, at about 10.10 p. m., railway time. The motion was perceptible for about one minute. There was no noise. The wind was northeast, smoky, with light rain. Only one shock was felt, and that was moderate. A tassel hanging from the mantel in the hall had a light motion from northwest to southeast.

1889  Coxsackie, Hudson River, New York.Some 200 tons of riprap were placed around the pier on the north side.

1891  Coxsackie, Hudson River, New York.Some 500 tons of riprap stone were placed on the up-stream side of the pier.

1896  Coxsackie, New York.Some 98 feet of pier rail was repaired and rebuilt. A new boat and wood house was built. Contract was made for placing 200 tons of riprap for the protection of the site.

1898  Coxsackie, Hudson River, New York.Some 601 tons of riprap were furnished and placed for the protection of the site.

1902  Coxsackie, New York.During the winter of 1901-1902, an ice gorge formed across the Hudson River between Coxsackie and Stuyvesant light-station, damming the water until it rose about 3 feet above the parlor-floor level at Stuyvesant, and on this level the ice formed about 3 ½ feet thick. On March 2,1902, the gorge broke, releasing the water and ice against the Coxsackie light-house. The northerly wall of the dwelling was broken through; the westerly wall cracked, and the first-floor hall and room filled with ice. The pier railing was carried away, and one-half of the capstones of the pier were dislodged and fell overboard. One outhouse was carried away; the boathouse and another outhouse were crushed and moved from their foundations. The site was banked with ice in large cakes from 6 to 10 feet high. The damages to the dwelling, boathouse, and outhouses, were repaired, and a new coal house, etc., built, and the station was restored, with the exception of the pier capstones and the railing. The color of the tower was changed from red to white. A new set of lamps for the lens was delivered. The work was begun on March 20 and continued to June 21, 1902.

1903  Coxsackie, New York.The construction of the ice breaker under contract, which was begun on June 4, 1903, is still in progress.

1904  Coxsackie, Hudson River, New York.Contract was made for the construction of the new ice breaker here. Work was begun in June, 1903. Agreement was made for the delivery of 1,000 tons of riprap, and to place it inside of the ice breaker. About 570 tons were delivered and placed during September. The balance of the stone was delivered in October, and the work of the construction of the ice breaker was continued. The work of erection was, on November 7, 1903, completed.

1922  Jerome McDougall, keeper of Coxsackie Light Station, N.Y., recently had a hazardous experience while endeavoring to maintain the light. This light is located on a dolphin in the Hudson River, and the keeper was attempting to change the lantern reservoirs. The structure had been weakened by the ice and collapsed with the weight of the keeper. He extricated himself from the wreck and started to swim to shore, but, finding that his clothes and the intense cold would prevent this returned to the sunken boat and clung to the stern. In a few minutes his hands were frozen stiff and useless, but he managed to rest an arm on the skiff. He was seen from a Standard Oil tug, which came to his rescue, throwing out a line: but the keepers hands were useless, and he tried to take a half turn about his arm, and at the same time took the line in his teeth, and was rescued in that way.

1922  Jerome McDougall, keeper of Coxsackie Light Station, M.Y., on December 13, had a hazardous experience while endeavoring to change the reservoir on the dolphin of East Flats Beacon, resulting in him being carried into the river upon the collapse of the structure, and subsequently rescued from drowning.

For a larger map of Coxsackie Lighthouse, click the lighthouse in the above map.

The modern light is best seen by boat. A metal light tower of unknown origin can be seen on the grounds of Coxsackie Yacht Club.