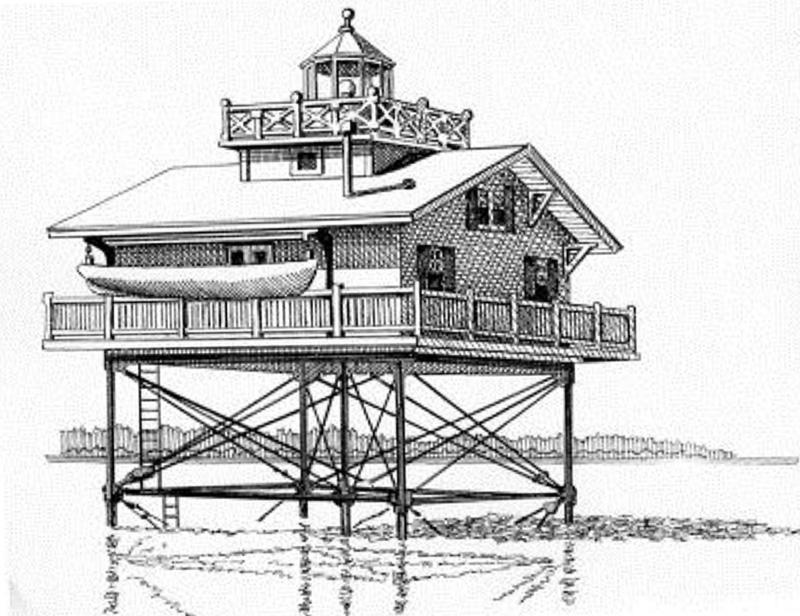 1867  Dames' Point.Before the war a light-vessel was stationed here, but the Board deems this an expensive way of marking the danger, and it is proposed to place a beacon light on shore, which will answer every purpose. But this being a comparatively unimportant station, will be among the last re-established.

1868  Dame's Point light-vessel.This light-vessel, in St. John's river, was discontinued during the war and has not been re-established. The interests of commerce do not require a light at this place, and upon the recommendation of the Board, the honorable the Secretary of the Treasury has directed that the station be discontinued.

1870  Dames Point, St. John's River, Florida.A light-vessel was provided by authority of law prior to 1861, and placed to mark the channel of the St. John's River, Florida, around Dames' Point. That vessel was removed during the rebellion. The navigation of that river to Jacksonville, Pilatka, and the intermediate settlements having been renewed within the last two or three years, the construction of that or other similar aid to mark that point has been strongly urged. An estimate for a screw-pile light-house similar to those erected in the waters of the Chesapeake and North Carolina has been submitted, to be placed on the shoal opposite to Dames' Point, as being more economical and better suited for the purpose than a light-vessel.

1871  Dame's Point, St. John's River, Florida.An examination of the site for this Light house was made by the Engineer of the district. On sinking an artesian well, the underlying strata were found to consist of soft mud to a depth of sixteen feet. The borings were not carried below this depth. It is believed that a screw-pile Light house can be built here, but before it is commenced further examination of the foundation will be made.

1872  Dame's Point screw-pile light-house, off Dame's Point, River Saint John, Florida.This structure was framed at the workshops at Lazaretto Point, Maryland, during the winter, and the iron-work prepared under contract. In March, 1872, a working party was dispatched to erect the structure, which was completed in June. The light-house stands on a shoal in 8 feet of water. It is built on six wood piles, with cast-iron sleeves, and has two fender-piles, one up and the other down stream. The light, which is fixed white, was exhibited July 15, 1872.

1880  Dame's Point, Saint John's River, Florida.This station was repainted throughout and some slight repairs made.

1886  Dame's Point Light-Station.A screw-pile structure, standing on a shoal in 8 feet of water in the Saint John's River, 11 miles below Jacksonville, Fla. The keeper reports that the first earthquake shock was felt on August 31 at 9.24 p. m., sun time; it lasted about seven seconds, and was followed by three others in succession until 9.35 p.m. There was a rushing sound, like the wind blowing through a forest, although it was perfectly calm at the time. It was sufficiently strong to crack the plaster. The clock stopped at 9.44 p.m. The length of its pendulum is 16 inches. It faces the north. The first tremor raised the house, and then shook it east and west hard enough to splash the water out of the iron tanks.

1891  This structure, which stands on a foundation of iron piles, having been struck slightly several times by lightning, an additional lightning conductor of copper was provided to run from the lantern sill to one of the iron piles and thence below the lowest water line.

1893 - Dame Point, St. Johns River, Florida.The establishment of numerous post lights in the St. Johns River, above and below the Dame Point light-house made the continuance of this light unnecessary. It was discontinued on February 28, 1893. The lantern and lens were taken down and transferred to Charleston, S. C, and the lantern parapet was roofed in with shingles.

For a larger map of Dames Point Lighthouse, click the lighthouse in the above map.