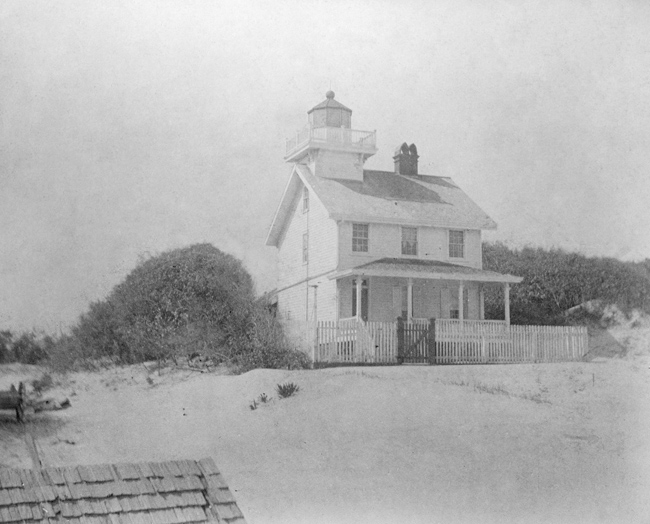 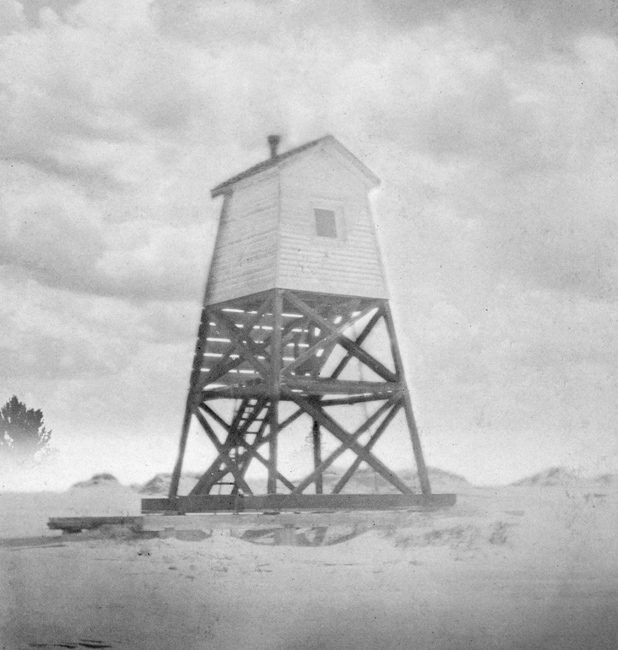 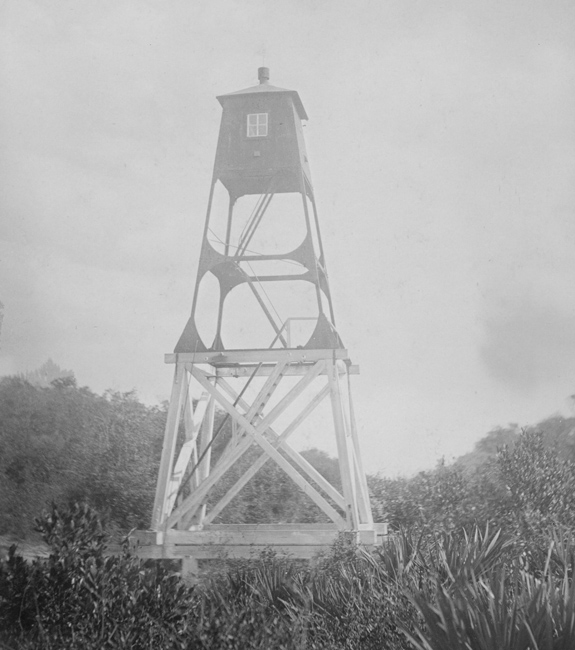 1857  The beacons authorized at Amelia island and at Sapelo, Georgia, will be erected during the present season.

1858  The two beacons on the north front of Amelia island, Florida, have been completed, and will be lighted on the first of November next. Negotiations have been entered into for the purchase of the site of the beacon to range with the main light on Amelia island.

1863  Amelia Island North Beacons, erected in 1858, serve as a range for the channel into St. Marys River. These beacons are 1/3 mile apart. The front beacon is an open framework structure painted red. The rear or inner beacon is on a wooden dwelling house, painted white, with red roof. North Beacons were destroyed during the Civil War.

1867 - Amelia Island beacon, in front, seaward, of the main light, at a distance of about five-eighths of a mile, has been re-established. It is movable, on wheels and a tramway of one hundred feet. The range indicates the channel across the bar, entrance to Fernandina, Florida. A plank walk from the main light across the marsh to the beacon, three-eighths of a mile in length, is under construction and will soon be finished.

1868  Amelia island.The repairs in progress at this station at the date of the last annual report have been completed and a fence constructed. A plank walk 840 yards in length has been made across the marsh to the beacon light in front, and a roadway, 680 yards, cleared.

1868  North beacons, Amelia island..This station has not been re-established.

1869  Amelia Island, Ga.This station is in good condition. Some small repairs have been made to the keeper's dwelling, and steps made between the main light and the beacon.

1869  Amelia Island Range Beacon.Some small repairs made upon the beacon.

1870  Amelia Island inner range beacons, to enter St. Mary's, Georgia, and Fernandina, Florida.These beacons, established near Fort Clinch and destroyed during the rebellion, are now required to meet the wants of a growing navigation interest, and an estimate has been submitted to supply the deficiency caused by the appropriation for "restoring lights on the southern coast" having reverted to the treasury under the act of July 12, 1870.

1871  Amelia Island, North Range, St. Mary's Bar, Florida.Plans and estimates have been prepared for a keeper's dwelling, and beacons for this range. As the site is on Government land, near Fort Clinch, there will probably be no delay in regard to the sites, and the work may be done during the present winter.

Work on a set of range lights, known as Amelia Island North Range Beacons, began in December 1871 and was finished the following May. The ranges rear light was displayed from a short square tower mounted atop the pitched roof of a two-and-a-half-story keepers dwelling, while the front light was displayed from a square window in the enclosed portion of a square, frame tower. The range lights were activated on June 1, 1872 and served in their original configuration until March 1880.

John Miles, an African American, served as keeper of Amelia Island North Range from 1880 to 1895. In 1887, Keeper Miles wrote the following letter to A.A. Marks, the worlds largest manufacturer of artificial limbs at the time:

Permit me to say that your artificial leg with rubber foot attached, which I have been continuously using since September, 1886, is all that you have claimed for it.

I have but seven inches of thigh stump. My occupation is U.S. Light House Keeper, North Beacon Ranges, Amelia Island, Fla., and I have to go up and down in one of the ranges 45 feet high, on iron-rod steps, at least twice a day; so I have good reason to say your limbs are all you claim for them.

1872  Amelia Island north range-beacons, at entrance to Fernandina Harbor, Florida.The work on this range was commenced in December, 1871, and finished in May, 1872. The rear light is mounted on the keeper's dwelling, and the front one on an open-frame square pyramid, which rests on a tramway, and can be moved to the right or left to conform to the changes in the bar which are generally effected after a severe northeasterly or southeasterly gale. The lights at this station were exhibited June 1, 1872.

1873  Amelia Island north range beacons, on the north end of Amelia Island, Florida.The front beacon has been moved about 200 feet northward, to range through a new channel that opened to the north of the old channel.

1873  Amelia Island main light, entrance to Fernandina Harbor, Florida.The keeper's dwelling, which was in a dilapidated condition, has received extensive repairs and renovations. The tower and beacon have also been repaired and renovated, the cost of these repairs being paid for out of the general appropriations for repairs and incidental expenses of light-houses. The plank walk between the tower and beacon is entirely worn out, and it is proposed to replace it with an earthen causeway.

1874  Amelia Island main light, entrance to Fernandina Harbor, Florida.The front beacon has been moved about 150 feet to the south, to conform to the changes of the channel. The beacon is old and decayed, and has been injured by several removals. An appropriation of $1,200 is recommended for the re-establishment of the beacon and tramway. An earthen causeway has been built (to replace the worn-out plank-walk) between the lights.

1875  Amelia Island, front beacon, south range, on Amelia Island, Florida.This beacon is old and decayed, and is in danger of being destroyed by an ordinary gale of wind. It has recently been braced up to keep it from falling.

1876  Amelia Island, (front beacon,) Florida.A new iron beacon has been erected to take the place of the old wooden one. The cost was defrayed from the appropriation for repairs of light-houses, 1876.

1880  Amelia Island, North Range, on Amelia Island, sea-coast of Florida.The changes that had taken place on the bar rendered both the north and south range beacons useless. The south range-beacon was discontinued, and the structure was used in making, in part, a new rear light to the new north range. (The iron tower that had held the beacon that ranged with Amelia Island Lighthouse was mounted atop a wooden base and used to replace the rear light of the North Range.)

1886  Amelia Island range beacons, on the north end of Amelia Island, Florida.In September the front beacon was moved 70 feet to the southward, to accommodate the range to the channel, which had shifted. New sills and tramway were put under the beacon when the change was made.

1887  Amelia Island range, on north end of Amelia. Island, Florida. New tramway sills were put under the rear beacon on ten brick piers, which were substituted for the wooden posts of the old tramway, and 630 linear feet of elevated plank walk were built between the beacons.

1890  Amelia Island range, on north end of Amelia Island, Florida. A new wooden substructure 20 feet high, was built for the rear beacon of this range. A new tramway was built for the front beacon. The beacon itself was moved 65 feet to the southward to make the rangeline conform to changes in the channel and various minor repairs were made. Some 200 linear feet of sand fence was built to protect the site from the drifting sand. The fences have done something toward stopping the movement of the sand in the direction of the dwelling, but in addition about 500 linear feet will be required and it will be necessary to remove with spade and barrow about 1,000 cubic yards of sand from the immediate vicinity of the dwelling.

1891  Amelia Island Range, seacoast of Florida.Some 600 lineal feet of sand fence were put up between the dwelling and the beacon to control the movement of the sand dunes which threaten this building. A fireproof oil house, 9 feet by 11 feet in the clear, with ventilators and drainpipes, and shelves sufficient to receive 450 5-gallon oil cans, was built. The movement of the sand dunes still seriously threatens the safety of the dwelling.

1892  Amelia Island Range, south side of Fernandina Entrance, Florida.The movement of the sand dunes, which was somewhat checked by the sand fences erected for the protection of the range, still continues to threaten the dwelling, and additional fences are needed. Cracks in cistern walls, caused by the earthquake of 1886, have increased in size and length. Slight repairs were made.

1893  Amelia Island Range, Fernandina entrance, Florida.The channel across the bar at the Fernandina entrance, through which this range was intended to guide vessels, has shifted during the last few years so widely that it was found impracticable to accommodate heavy structures to its frequent changes. The lights thus became a source of danger rather than of assistance to navigation, and they were therefore discontinued in December, 1892. In order that the entrance should not be closed to vessels at night during the period of this discontinuance, temporary ranges consisting of light triangular structures carrying tubular lanterns, which could be easily and rapidly moved from place to place as the changes in the channel might demand, were substituted for the permanent beacons, and have given satisfaction.

1894  Amelia Island range, Fernandina entrance, Florida.The permanent lights of this range had been discontinued, because the channel through which they were intended to guide vessels shifted so much and so often as to make them worse than useless. Hence light wooden skeleton structures which could be easily moved to accommodate them to changes in the channel were substituted for them. These give satisfaction

1895  Amelia Island range, Fernandina entrance, Florida.Some 200 running feet of sand fences were constructed, and the beacon was almost rebuilt. Minor repairs were made. The beacons consist of only two light, movable, framed structures carrying Funck lanterns. They were established upon the discontinuance of the lights of the regular range in 1893, consequent upon a great change in the direction of the channel across the bar, and were only intended to be used until it could be determined whether the new channel would be a permanent one.

1896  Amelia Island Range, Fernandina entrance, Florida.The structures used for temporary beacons of this range, since the permanent ones were discontinued as misleading, were so changed as to adapt them to carry lens lanterns instead of Funck lanterns. The former were provided and put in place. The dwelling is in danger of being overwhelmed with sand dunes.

1897  Amelia Island Range, Fernandina entrance, Florida.The temporary movable beacons, used for this range since the permanent ones were discontinued as misleading, were supplied with lens lanterns in place of the Funck lanterns. The channel, however, has shifted so far to the southward and changed its direction so much that even these movable lights can not now be placed so as to guide through the best water. Until the channel becomes more fixed, buoys will be the only available guides across the bar. Extensive repairs were made to the keeper's dwelling. Some 250 feet of new picket fence was built; also 32 feet of sand breaks, to stop the advance of encroaching sand dunes. Various other repairs were made.

1898  Amelia Island Range, Fernandina entrance, Florida.The channel has shifted so far to the southward that even the moveable lights provided for the range can not now be placed so as to guide through the best water, and until the channel becomes more fixed, buoy will be the only available guides across the bar. Minor repairs were made.

For a larger map of Amelia Island North Range Lighthouse, click the lighthouse in the above map.

No light exists at this location today, but the remains of an oil house associated with this station can be seen in Fort Clinch State Park.