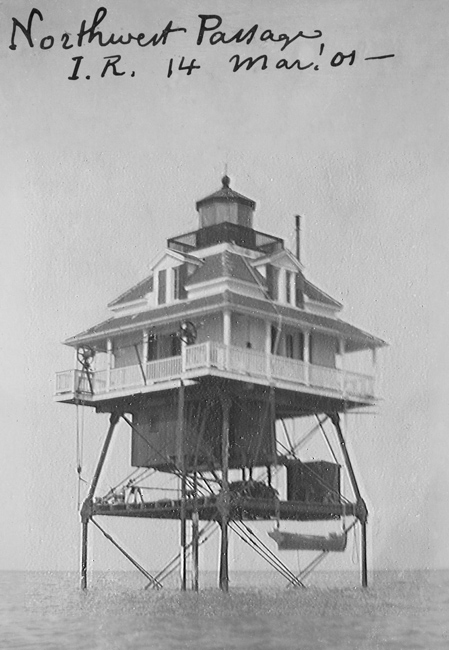 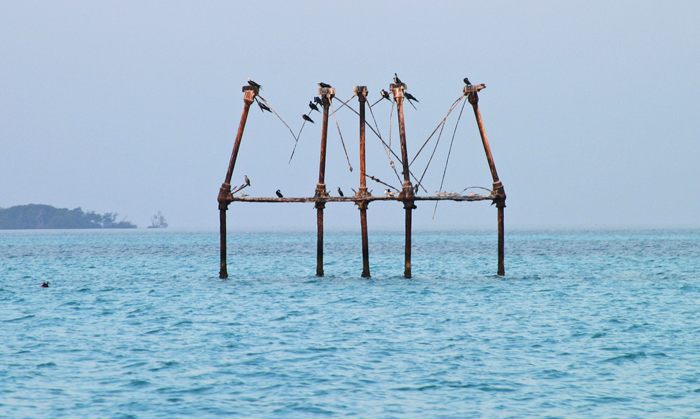 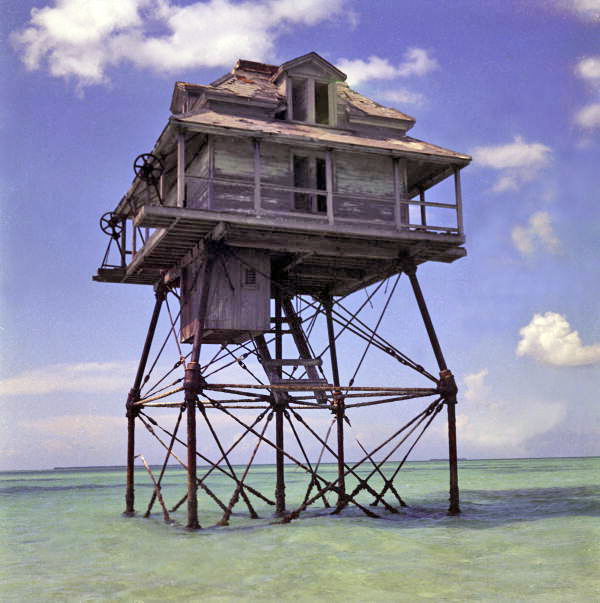 1837  Key West, July 15, 1837. SIR: I have the honor to report, that I have examined the northwest passage of Key West, and would suggest the propriety of placing a lightboat on the inner part of the bar leading through that passage. All vessels passing through the Gulf stream into the Gulf of Mexico, drawing not more than ten and a half feet of water, shorten their voyages very much by availing themselves of this passage, as it puts outward-bound vessels sixty miles to windward of the Tortugas, and shortens their voyage more than one hundred miles. Those who know the passage pass through it without a pilot in good weather. Vessels bound from ports in the bay of Mexico to the northern ports cannot so readily enter this passage, because the bar is nine miles northwest from Key West, and when rainy or hazy weather occurs the town cannot be seen that distance; and there is now no object near the bar so striking as to assure the mariner that he is right. All this would be obviated by a lightvessel anchored in the best water, just within the bar.

All vessels passing this channel avoid the dangers of the Tortugas shoals and quicksands. &c, which destroy so many vessels, and occasion the loss of so much property.

The northwest bar is very short, and it is supposed that, at a moderate expense, it is susceptible of being deepened to the same number of feet as the mouth of the Mississippi and the bar of Mobile.

In times of war, such a passage would be invaluable to the safety of our coasting trade; in times of peace, it is of countless value in shortening and rendering safe our coasting voyages.

Whilst I have the honor to remain.

1853 -The light-vessel stationed at the northwest passage, near Key West, was removed from her station, repaired, and restored to her position in an unusually short space of time, and at a mere nominal expense, compared with what from previous representations it was supposed would be required.

1853  Lieutenant Meade has prepared and submitted, or has in course of preparation to be submitted in a short time, reports, plans, and estimates for the following works authorized for this district, viz: For the first-class light on the Florida reef, at the point known as Coffin's patches; for a pile foundation light-house for the northwest passage, near Key West; for a light-house to be constructed on Sea-horse, one of the Cedar keys; and for a beacon on Rebecca shoal, to mark the channel between the Tortugas islands and the keys on the coast of Florida. These works, it is believed, will all be commenced during the present season, and prosecuted with every means compatible with true economy.

1854  Iron pile Light-house, Northwest channel, harbor of Key West  An examination of the Northwest channel, with a view to selecting a site for this work, was made in July of last year, and a report, accompanied by plans in detail and estimates, presented to the board in January, and approved by them on the 30th of that month.

The work, in all its parts was then manufactured here and put together, and early in May shipped to Key West, to be erected there so soon as the foundation-piles could be inserted. The prevalence of the yellow fever at Key West prevented the employment of unacclimated northern mechanics during the season it was originally designed to erect this work, and caused its postponement till the fall of the year, when the usual health of the place will be restored. The materials were accordingly securely stored on the public grounds of Fort Taylor, through the courtesy of the engineer in charge, and so soon as the health of the place will permit. A working party will be dispatched to erect the work; and it is confidently expected the work will be completed, and a light exhibited therefrom, by the close of the year.

1855  Iron-pile light-house, Northwest Channel, harbor of Key West.At the date of my last annual report, you were duly advised that the materials for this work had been prepared and shipped to Key West; but that, owing to the prevalence of the epidemic at that place, the erection of the structure had been postponed to a more healthy season. A working party was, therefore, organized early in October last, and dispatched in the vessel belonging to this district, and operations were commenced at the site selected early in November. In consequence of the boisterous character of the season, and the exposed position of the work, notwithstanding the unremitting efforts of the superintendent in charge, and those under him, it was not until the month of March that the structure was completed. A light, however, was exhibited therefrom, in accordance with previous public notice, on the 5th March, and the keeper installed a few days before.

This structure is founded on five wrought-iron piles driven into the coral formation, through cast-iron disks of four feet diameter, above the reach of the wave. These foundation-piles are continued with 12-inch yellow-pine spars, and on these is placed a frame building with a fire-proof roof of galvanized iron, surmounted by an iron lantern. The illuminating apparatus is of the fifth-order Fresnel, fixed, and shows a light over 275° of the horizon, with an available range of ten miles beyond the bar.

1868  Northwest Passage.This station begins to show the effects of the climate. The roof of the dwelling leaks, and the station needs a general overhauling and repairs.

1869  Northwest Passage, Key West Harbor.This structure (wrought-iron piles) has been thoroughly repaired and painted, and a number of panes of glass placed in the lantern. This is in good order and condition.

1871  Principal repairs at Dry Bank Light-house, scraping, painting, and coal-tarring of iron-work, lower section, &c. At Sand Key, the same, (with a new boat-house.) At Northwest Passage, the same.

1874  Northwest Passage, entrance to Key West Harbor.An iron screwpile light-house. The metal above water has been carefully scaled and painted throughout; the lower braces need renewing, and other repairs of an extensive nature are required.

1876  Northwest Passage, Florida.All the iron-work has been cleaned, as at the other stations, and twice painted.

1877  Northwest Passage, Key West Harbor, Florida.The wood-work of this structure is much decayed, and extensive repairs will soon be required. As the structure is not a suitable one for this station it is thought better, and, in the end, more economical, to erect a new one of the latest and most approved construction, for which an appropriation of $20,000 is required.

1878  Northwest Passage, Key West Harbor, Florida.This station should be thoroughly repaired. The wood-work of the dwelling as well as its supports are rotten. To properly repair the structure will cost six thousand dollars, and an appropriation of that amount is suggested.

1879  Northwest Passage, Key West Harbor, Florida.The old structure, with the exception of the foundation series of iron-piles, was torn down. A two-storied frame dwelling, surmounted by a fourth-order illuminating apparatus, was erected. The new light was exhibited on the night of June 30. A masthead-light has been exhibited here from June 2 up to and including June 29. The increased height of the light above sea-level and the higher order of illuminating apparatus have rendered the light much more effective than the old one.

1880  Northwest Passage, Key West Harbor, Florida.The final work to the new structure was completed in the early part of the fiscal year. It is in good order.

1881  Northwest Passage, on the flats, to mark the channel of the bar leading to Northwest Channel, Key West, Florida.The foundation-series and iron-work were painted by the keepers, and the dwelling touched up with paint. The station is in good order.

1882  Northwest Passage, on the flats, to mark the channel off the bar leading to Northwest Channel, Key West, Florida.New mineral oil-lamps were fitted, the structure was scraped and painted, and the lightning-rod was repaired. This little station is in excellent order.

1885  Northwest Passage range light, Key West, Florida.An appropriation of $200 is available for building a small range-light at the Northwest Passage Bar. The work will be finished some time during the coming summer.

1892  North-west Passage, entrance to harbor of Key West, Gulf of Mexico, Florida.The positions for the proposed red sectors were laid out, and various minor repairs were made. The iron light-house was scaled and painted.

1899  Northwest passage, on the fiats to mark the channel leading to the northwest channel over the bar, Florida.A new oil house was built and hung on the iron rods under the dwelling; it was ceiled inside, furnished with a door, and the entire structure was painted. A platform was built to connect it with the ladder leading up to the dwelling. Various repairs were made.

1913  Northwest Passage was automated after acetylene equipment was installed.

For a larger map of Northwest Passage Lighthouse, click the lighthouse in the above map.

No light exists at this location today, but the screwpiles from the lighthouse are still visible.