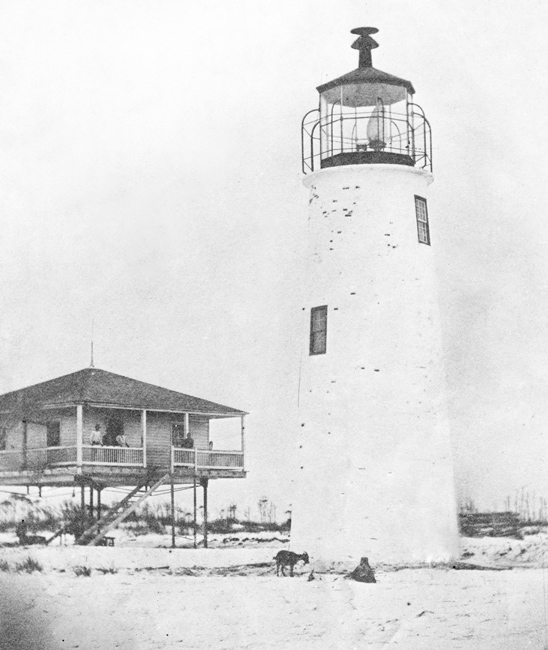 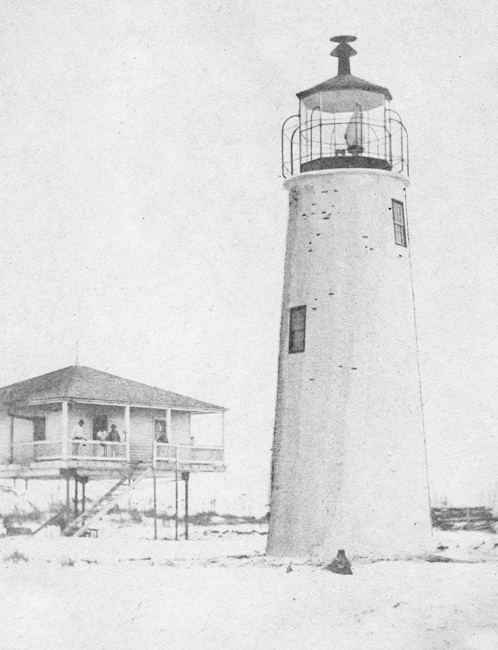 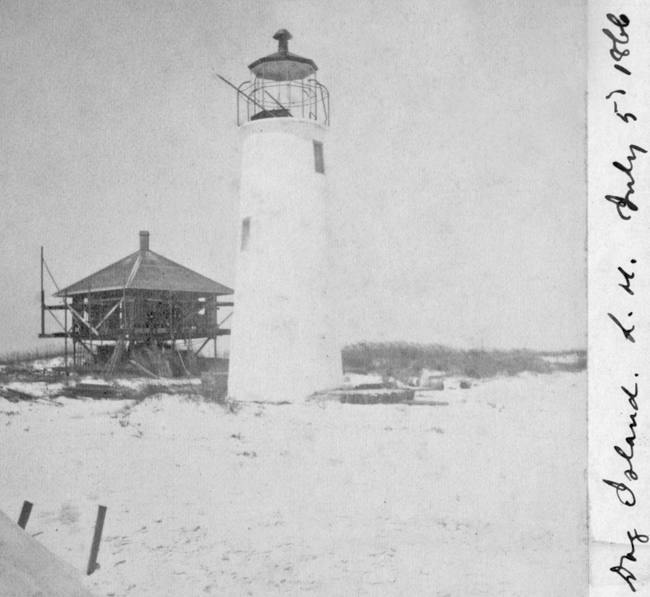 1838  On October 1, 1838, two trustees of the Apalachicola Land Company deeded a strip of land of some five acres on Dog Island, Franklin County, Florida, to the United States for lighthouse purposes.

1854  At Dog Island, the principal entrance to Apalache bay, the door of the tower had been swept away by a hurricane. A new one has been built and hung. The seaward lower window, which had been burst in by the same storm, has been securely planked up. Spare plate-glass for the lantern has been provided. The tower has been whitewashed, under the supervision of the collector at Apalachicola.

1855  A new dwelling for the keeper has been built at the Dog Island light-house. It is a framed dwelling, 25 feet square, resting on five wrought-iron piles, screwed 8 feet into the sand, the sills being 8 feet above the surface of the ground. The foundation of the tower was also repaired and deepened, and a stratum of concrete placed around the base to prevent undermining by winds and waves.

1866  At Dog Island light-house it was found necessary to make considerable renovations to the foundation and station generally. The keeper's dwelling had been burnt, also portions of the stairway. Shot-holes had been made through the lantern, &c. This light has been re-exhibited.

1868  Dog island The attention of the Board has been called to the dangerous exposure of this tower in heavy gales, being situated on a low spit, liable to be washed away in the first hurricane that may sweep over that part of the coast. The new dwelling on screw piles situated on a sand-hill about 15 feet above sea level will afford secure refuge to the keepers and their families in case of loss of tower. The ground is highly favorable for the construction of a new light-house on high ground at a moderate cost, the secure harbor, "Pilot's Cove," affording conveniences of landing materials at all times unsurpassed by any station in the district, except those in the Mississippi.

The eventual destruction of the present tower, under the circumstances stated, cannot be doubted, resulting in the extinction of one of the important lights on the Gulf coast, the destruction of public property, and involving danger to the lives of the attendants. In view of these facts the early construction of a new iron light-house, and, by reason of its position, an increase in the order of the light, is recommended.

1869  Dog Island, Florida.The condition of this station is good.

1872  Dog Island, Saint George's Sound, Florida.The brick tower is in a very precarious situation from wearing of the beach. It has been expected for several years that the first heavy gale from the southeast would undermine and overturn it. Some time ago the precaution was taken of driving a triple row of piles about six feet long in a circle around the foundation, at a distance from its outside of about ten feet and filling in between the piling and the tower to the depth of about three feet with concrete, with a smooth cement surface on top. A storm about six months ago washed away the sand on the south side nearly to the bottom of the piles, tore some of them out, and broke up the concrete. The tower was undermined on this side and settled, so that now it leans toward the south, about one foot out of the perpendicular. It might be preserved for some time by correcting the fault of inclination, driving piles around the base and concreting as before, only carrying both piles and concrete to a greater depth. But as it would eventually be swept away by the encroachments of the sea, it is considered better to transfer the lantern and lens from the tower and place them on the keeper's dwelling, which is on screw-piles and farther from the beach than the tower. This will be done, and it will be necessary to strengthen the piles by the usual iron braces, of which this building is destitute. To effect the change will require $2,500, and the arrangement ought to secure the light for a number of years, except in case of some extraordinary storm.

1873  Dog Island, Saint George's Sound, Florida.As mentioned in the last annual report, the brick tower built here in 1838 was in imminent danger of destruction by the undermining of its foundation, caused by the encroachment of the sea on the south beach of the island. No funds being available to replace the light-house by the erection of a new one farther inland, and the necessity for prompt action, to prevent the extinction of the light, being imperative, it was decided to remove the lens and lantern from their perilous position and place them on the top of the keeper's dwelling, (an ordinary square wooden building on iron screw-piles,) situated farther from the beach. This was accomplished by the party engaged on general repairs, and the light is now in a position of temporary security. As the beach wears away and approaches the present location of the light, so as to endanger it, the tower will have to be rebuilt on some more permanent site, and an appropriation will be requisite. It is presumed, however, that the light is safe for some time to come, and a discussion of the merits of the proper location and character of the new tower is consequently reserved for a future report

1874  Dog Island, Saint George Sound, Florida.Owing to the washing away of the south beach, endangering the safety of the old brick tower built in 1838, the lantern and lens were removed in the latter part of 1872, and placed on the keeper's dwelling, a screw-pile structure, which stood farther inland. This was done to prevent, if possible, the extinguishment of the light until funds should be available for the construction of a light-house in a more protected position. It, however, failed, as the station was visited on the 18th and 19th of September, 1873, by a hurricane, during which the old brick tower and the keeper's dwelling were completely destroyed. An appropriation of $20,000 having been made at the last session of Congress for re-establishing this station, the work will be taken in hand at an early day. At this station, the keepers lost their personal property at the time of the destruction of the station by hurricane of September, 1873. It is recommended that an appropriation of $970.50 be appropriated for their reimbursement.

1875  Dog Island, Saint George's Sound, Florida.This station was destroyed in the hurricane of September, 1873. An appropriation of $20,000 was made by the act of June 23,1874, for its reconstruction, and nearly the entire amount remains available. This light can only serve a local commerce, of which, for several years, there has been little or none; and it is therefore recommended that the new work be indefinitely postponed.

For a larger map of Dog Island Lighthouse, click the lighthouse in the above map.