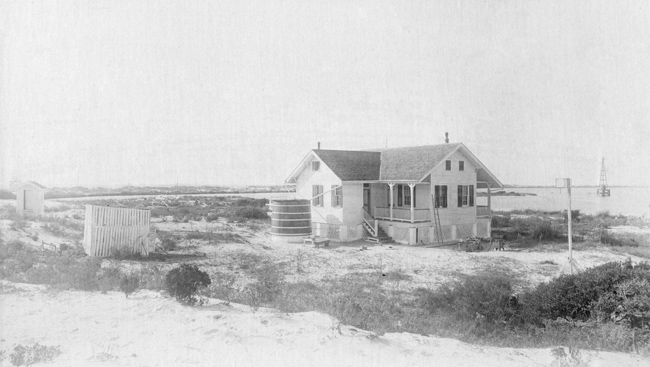 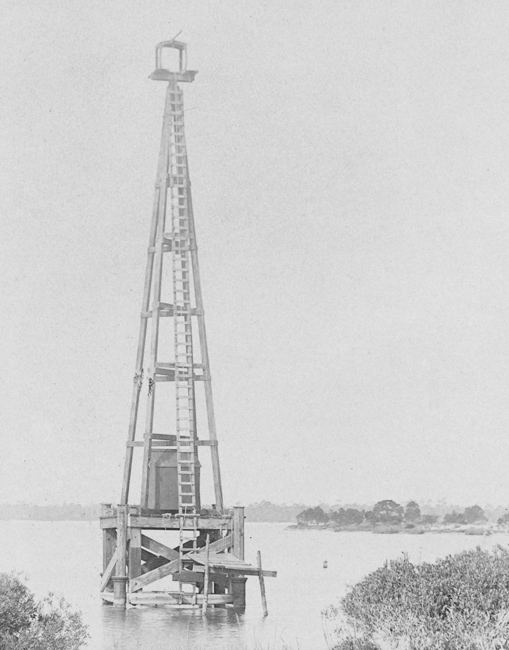 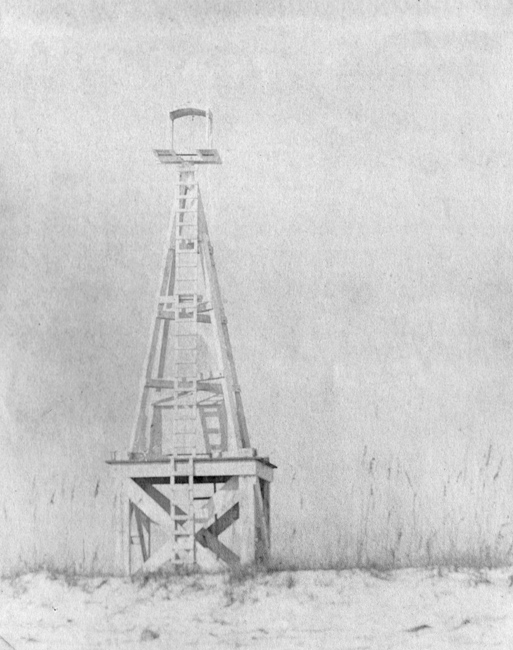 1859  The new light-house at Pensacola and the new set of ranges at that place have been completed, and were lighted in January last. The new tower at Sand island was completed and the light exhibited in the same month.

1867 -Pensacola.The work of re-establishing the Barancas and Caycas, or Fort MCRAE, range beacons, which were destroyed during the war, was commenced on November 3, 1866, and completed on the 19th of the same month. The rapid execution of this work was in a great measure due to the fact that the wooden structures were framed before being carried to the station. Notwithstanding some delay and difficulty in the way of landing the materials in boats at the Caycas range, the five structures, Bar, Barancas, and Caycas range, were put up, whitewashed, and painted; illuminating apparatus, consisting of steamer's lenses, put up and adjusted, and the beacons ready for lighting, in sixteen days. The force employed consisted of four laborers and two carpenters.

The Caycas range was lighted on the 22d December, 1866, and the Barancas on the 4th February, 1867, the delay being caused by the failure of the respective keepers to report for duty at the proper time, owing to some misunderstanding.

1888  Fort McRae lighted range-beacon (front), south and west of Fort McRae, about 800 feet back from the low-water line, Pensacola Bay, Florida.This beacon was built by contract, is a square pyramidal frame-work on a square pile base, is painted white, and its lantern is about 36 feet above mean low water. This fixed white light was first exhibited on February 15, 1888.

1888  Fort McRae lighted range-beacon (rear), in a shallow lagoon, about 850 feet in the rear of the front beacon, Pensacola Bay, Florida.This beacon was built by contract, and is of the same style as the preceding beacon. It is painted red, and a fixed red light was shown on February 15, 1888, from its lantern, which is about 49 feet above mean low tide. A dwelling for the keeper of these range-lights will be erected as soon as the tender can be spared for the purpose.

1889  Fort McRae, front range, Pensacola Bay, Florida.A small platform, 4 feet square, was built on top of the beacon, and a small house was built for the lantern. A small house was made on the lower platform for oil and spare lanterns. Near this beacon a dwelling was put up for the keeper of the range. A one story frame dwelling was built on brick piers 5 feet above the ground, with kitchen attached. It has three rooms, with a piazza on the front and on the rear. A cistern was put up holding 4,320 gallons, and outhouses were erected.

1889  Fort McRae, rear range, Pensacola Bay, Florida.The four foundation piles were renewed, with pine piles covered with 12-inch cast iron pipe, with cement between the pile and the pipe to prevent their destruction by the teredo. A small platform was built on the top of the beacon, 4 feet square, and a small house was made for the lantern. On the lower platform another small house was placed for oil and spare lanterns.

1890  Fort McRae Range, front, Pensacola Bay, Florida.This structure was so damaged by a storm in May, 1890, that it became needful to take it down and move it back 100 feet from the old position on the same range. The brick pillars under the keeper's dwelling were repaired and various other repairs were made.

For a larger map of Fort McRee Lighthouse, click the lighthouse in the above map.