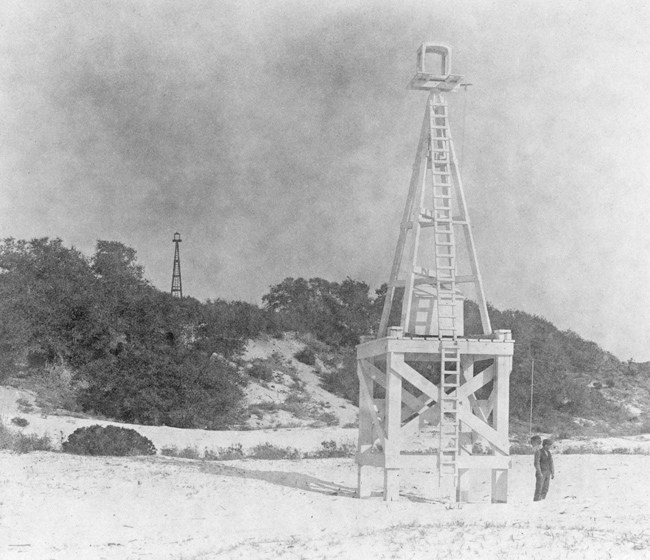 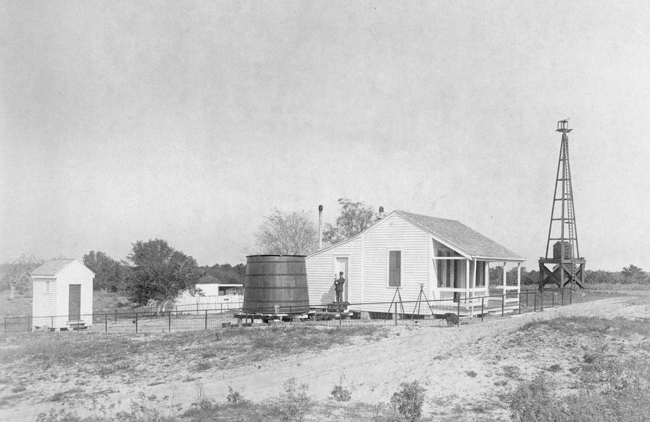 1859  The new light-house at Pensacola and the new set of ranges at that place have been completed, and were lighted in January last. The new tower at Sand island was completed and the light exhibited in the same month.

1867  Pensacola.The work of re-establishing the Barancas and Caycas, or Fort MCRAE, range beacons, which were destroyed during the war, was commenced on November 3, 1866, and completed on the 19th of the same month. The rapid execution of this work was in a great measure due to the fact that the wooden structures were framed before being carried to the station. Notwithstanding some delay and difficulty in the way of landing the materials in boats at the Caycas range, the five structures, Bar, Barancas, and Caycas range, were put up, whitewashed, and painted; illuminating apparatus, consisting of steamer's lenses, put up and adjusted, and the beacons ready for lighting, in sixteen days. The force employed consisted of four laborers and two carpenters.

The Caycas range was lighted on the 22d December, 1866, and the Barancas on the 4th February, 1867, the delay being caused by the failure of the respective keepers to report for duty at the proper time, owing to some misunderstanding.

1868  Under authority of the Department, the Barrancas and Caycas range beacons were discontinued January 1, 1868, being no longer deemed necessary for the commerce of Pensacola. The apparatus and fixtures were removed and suitably cared for.

1888  Barrancas lighted range-beacon (front), on the beach near Fort Barrancas, Pensacola Bay, Florida, about 150 feet back from the low-water line.This beacon was built by contract, and is similar to the front beacon of Port McRae range. It is painted white, and the lantern is about 36 feet above mean low tide. The light, which is fixed white, was first shown on February 15, 1888.

1888  Barrancas lighted range-beacon (rear), on a bluff about 25 feet high and about 400 feet in rear of the front beacon, Pensacola Bay, Florida. This beacon was built by contract, and is of the same style as the preceding beacon. It is painted red, and its lantern stands about 75 feet above mean low tide. The light is fixed red, and was first shown on February 15,1888. A watch-room for the use of the keeper of Barrancas range-lights will be erected at an early date.

1889  Fort Barrancas, front range, Pensacola Bay, Florida.A platform, 4 feet square, was put on the top of this beacon, and a small house was made for the lantern. On the lower platform a small house was placed for the oil and spare lanterns. The beacon was repainted.

1889  Fort Barrancas, rear range, Pensacola Bay, Florida.A platform was built on the top of this beacon 4 feet square, and on it was placed a small house for the lantern. A small house was built on the lower platform for the oil and spare lanterns. The beacon was repainted. A survey of the site for this beacon, as granted by the War Department, was made. A small watch-room for the use of the keeper of these beacons was built. This building contains two rooms, and has a piazza in front, weatherboarded on the outside and ceiled on the inside. Outhouses and cisterns were put up.

1892  Fort Barrancas front range, Pensacola Bay, Gulf of Mexico, Florida.Some 18 brick pillars were put under the dwelling and kitchen. A new foundation was put under the cistern and 300 feet of wire fence were put up.

1894  Fort Barrancas rear range, on the bluff in the rear of the front light, Florida.The wood foundation and substructure of the beacon was replaced with substantial brick piers, upon which heavy corner posts were placed and securely anchored to the piers. Various repairs were made.

1897  Fort Barrancas Range, front, Pensacola Bay, Gulf of Mexico, Florida.The dwelling was thoroughly repaired and a new frame addition was made to the old structure, with a verandah. The addition contains two rooms, kitchen and dining room. A new brick chimney was put up in the dining room. A new cistern was put up and placed on a foundation of nine brick piers. A platform was built in front of the cistern as an extension of the kitchen gallery, inclosed with rails.

1898  Fort Barrancas Range beacons, Florida.A horse stable 20 feet by 28 feet was rebuilt. A board fence was put up around the stable; it is 150 feet long on each side by 50 feet across. Various repairs were made.

1900  Fort Barrancas (front) beacon, on the beach near Fort Barrancas, Florida.This beacon is to be moved slightly to the westward. It is being furnished with hoisting gear and a 5-day lens lantern. The color of the light will be changed to red.

1900  Fort Barrancas (rear) beacon, on the bluff near Fort Barrancas, Florida.This beacon is to have the top changed and be equipped with a new 5-day lens lantern and new hoisting gear. The color of the light will be changed to white.

1901 - Fort Barrancas {front) Beacon, on the beach near Fort Barrancas, Florida.This beacon was taken down and rebuilt on a new foundation, 9 feet to the westward of its former position. The color of the light was changed from white to red and a new lens lantern installed on the structure. It was also equipped with a complete new set of hoisting gear.

1901  Fort Barrancas {rear) Beacon, on the bluff near Fort Barrancas, Florida.The beacon was painted and furnished with a complete set of new hoisting gear. The color of the light was changed from red to white and its power was increased from a post to a lens lantern.

1902  Fort Barrancas range (front and rear) beacons, Florida.Some 300 feet of old iron fence was removed and a picket fence with two gates was built and painted. Some 350 feet of old board fence 6 feet high was replaced. A new gallery on brick piers was built. A brick chimney was built in the kitchen. A chimney was built in the dwelling. Steps were built from dwelling gallery to yard. The well was cleaned out, a curbing was built around the upper part, and a shed was built over it. Various repairs were made.

1907  Fort Barrancas Range front light, Pensacola Bay, Florida. A new beacon was built, to replace the one destroyed by storm, on the same site as the old one. Various repairs were made.

1907  Fort Barrancas Range front light, Pensacola Bay, Florida. A new beacon was built on the foundation of the one destroyed by storm. It is a square pyramid covered with horizontal slats on the seaward face, and painted white.

For a larger map of Fort Barrancas Lighthouse, click the lighthouse in the above map.