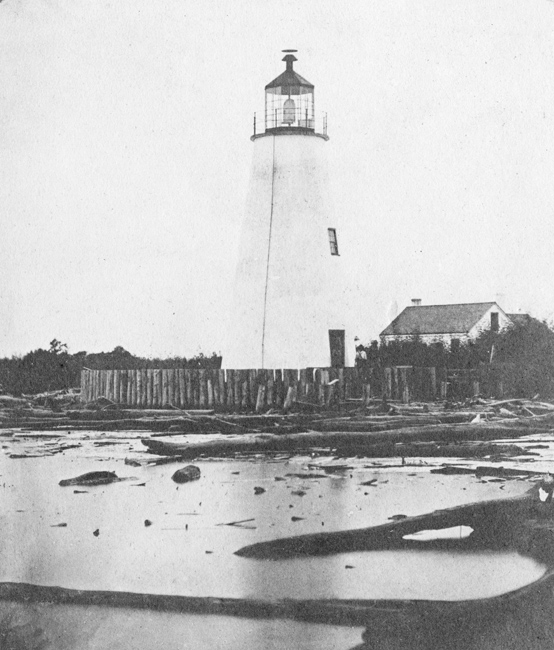 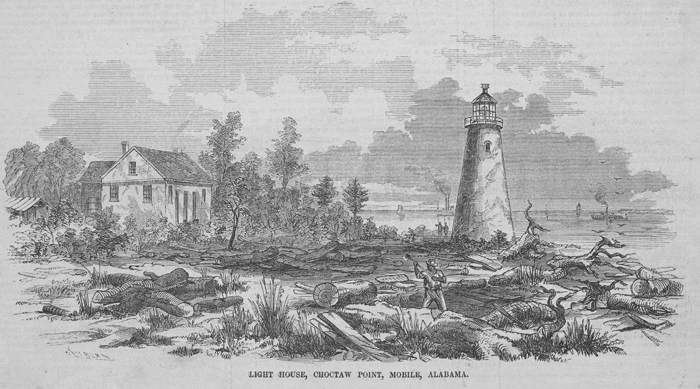 1854  At Choctaw Point, near Mobile, the tower has been whitewashed, the cistern painted, and the bottom of it renewed.

1858  The light-house and keeper's dwelling at Choctaw point, Alabama, have been thoroughly repaired.

1860  Extensive repairs have been put upon the structures at Choctaw point, Cat island, and St. Mark's. In consequence of the serious damage received at the two first named light-houses, so soon after they had been thoroughly repaired, and protected as far as practicable, the board is of opinion that nothing will answer at those points but screw pile light-houses, and it has therefore to recommend that the sum of $20,000 be appropriated for the two.

1867  Choctaw Point.The site of the old light-house was visited on the 17th August, and after examination it was found that the channel at the entrance to Mobile river has been so much changed, by the obstructions placed there by the rebels during the war, that a light established at this point would not answer all the requirements of commerce, but, in addition, range lights would be necessary to enable vessels to pass the obstructions. It is thought possible that such a site can be selected that one light will fulfil all the requirements.

In this connection it may be well to remark that other cases exist where the lights, if re-established, could serve no useful purpose, because of changes in the channels they were designed to indicate. The appropriation under which the restoration of the aids to navigation injured or destroyed on the southern coast IS carried on being a general one, it is recommended that the board be authorized, wherever such conditions are found, to change the site, so that the structure may stand where it may be most useful.

A draught of the necessary legal provision is herewith submitted.

1868  Choctaw Point.As stated in the last annual report, the old site is probably ineligible by reason of changes in the channel induced by artificial obstructions. A detailed survey will be required before any conclusion as to proper site or character of structure can be arrived at.

1868  Choctaw Pass.These range beacons in connection with the foregoing light-house were entirely destroyed during the war. Their re-establishment as to location and time will necessarily depend upon the result of investigations concerning the main light.

For a larger map of Choctaw Point Lighthouse, click the lighthouse in the above map.